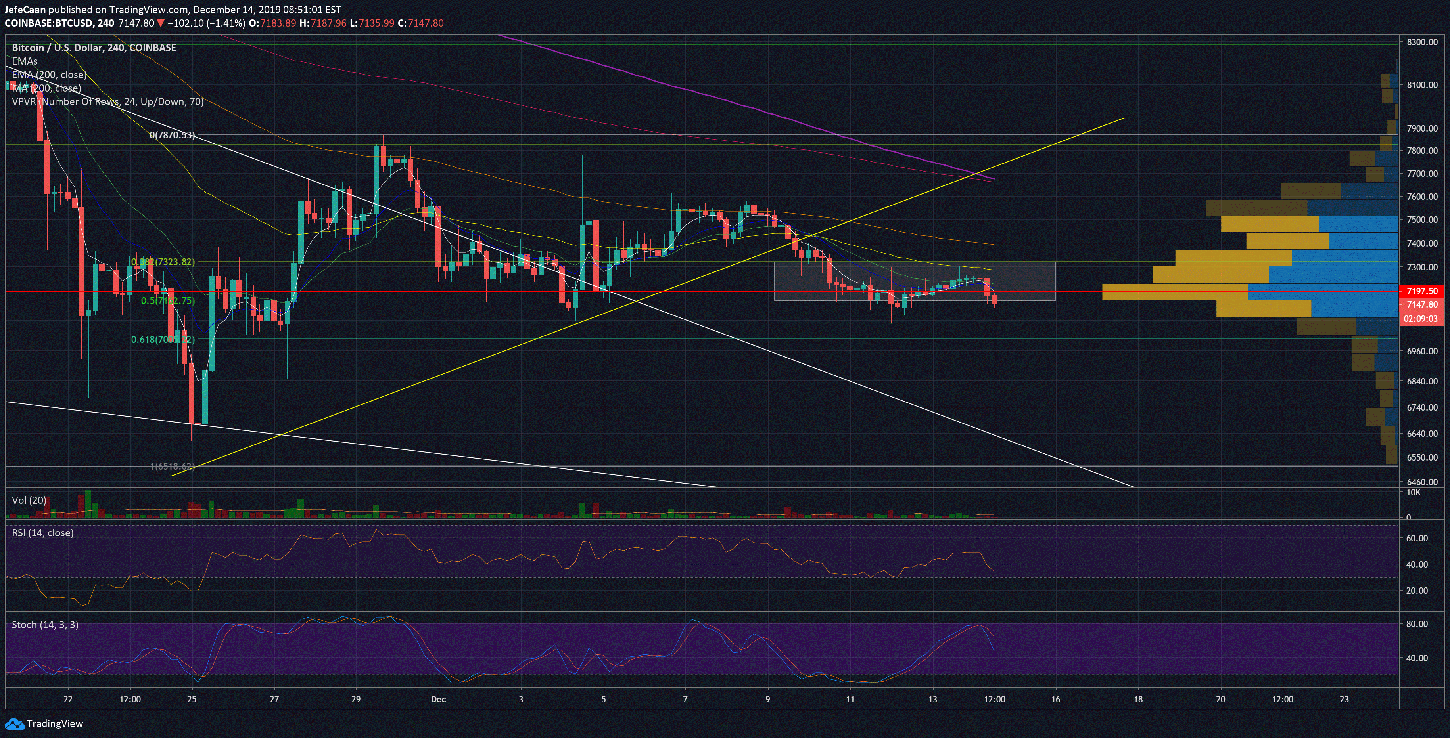 Bitcoin (BTC) has plunged below $7,200 again and is now once again at verge of massive further downside. The 4H chart for BTC/USD shows that the price has remained rangebound for a long time between the $7,197.5 and the $7,162.75 levels. The latter which also corresponds to the 50% fib level has now been breached for the first time in two days which tells us that something decisive might be around the corner. The price of Bitcoin (BTC) may be above to decline down to the 61.8% fib level which would be around $7,000. The price is very unlikely to stop there if it does decline. The next stop for BTC/USD is $6,000 and eventually much lower levels after that.

Once the downtrend sets in, we would expect BTC/USD to fall all the way down to the bottom of the falling wedge most likely taking out the November, 2019 lows. Historically we have seen sell-offs in the cryptocurrency market around Christmas. The rationale behind this is that a lot of big traders want to take time off without having to worry about something so unpredictable as Bitcoin (BTC) so they end up selling or closing their bullish positions. At this time, the market is not really at a point where any of those big players would want to leave their positions open or hold on to their coins while they take time off because they know the price is going to crash sooner rather than later. So, it makes a lot of sense that we might see this sharp decline to $6,000 before the end of the year.

The UK election led to some volatility in the EUR/USD forex pair and as we can see on the 4H time frame it shot up to make a triple top. At this point, it has already retraced significantly and given away most of those gains indicating that it was just an overreaction and not a decisive move. In any case, the trend line support (shown in green) is what is going to decide whether this pair stays bullish or bearish in the near future.

Considering that there is certainty in the market with Brexit finally out of the way, we could expect the long-awaited downtrend in EUR/USD and GBP/USD to finally set in. This is quite likely to drag the price of Bitcoin (BTC) much lower as a rise in the strength of the US Dollar (USD) means a fall in the price of cryptocurrencies in dollar terms. If Bitcoin (BTC) begins its downtrend from here, it will find support at the $6,854 level but after that it will be in the clear to drop aggressively till $5,522 which is where it will find a strong support. If Bitcoin (BTC) closes below the 200 Week EMA, it will become more probable that the price will decline not only below $5,000 but below $3,000 in the weeks and months ahead.