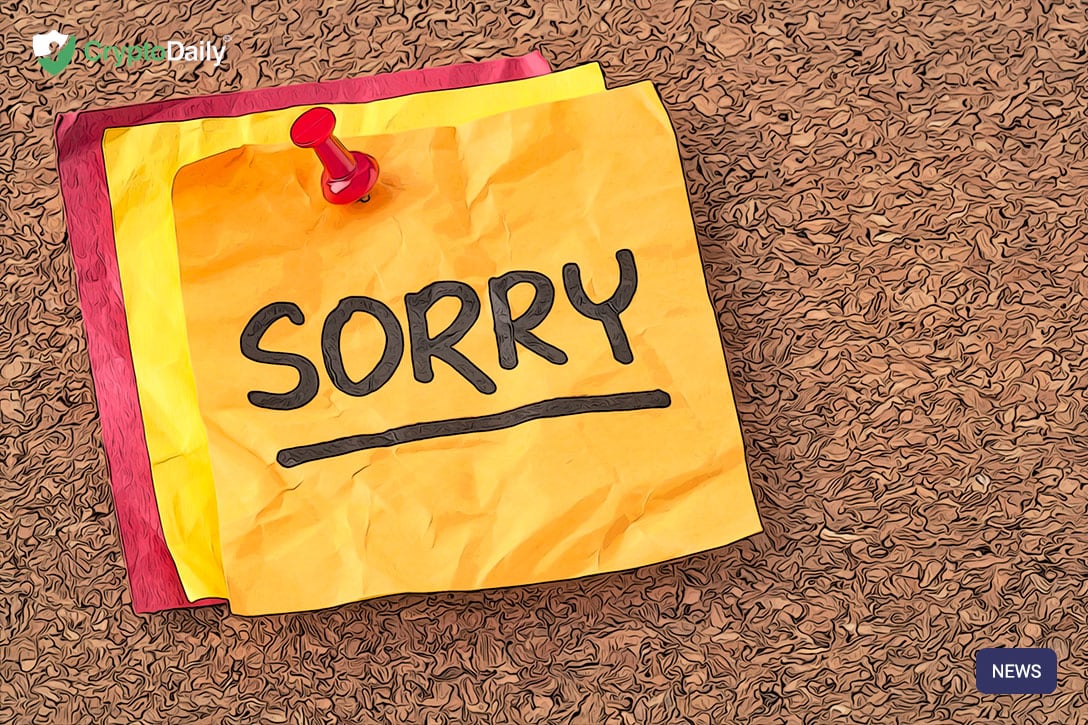 There is a lot of drama surrounding Justin Sun this week and rightly so. The TRON CEO has cancelled his lunch after falling ill with kidney stones but as previously reported by CryptoDaily, it seems there’s a twist in the tale.

Well, I woke up today and there seems to be yet ANOTHER twist in said tale.

Just hours ago, Sun posted a statement on Weibo and apologised for the whole situation between the TRON community and Chinese authorities for “vulgar hype and marketing behavior.” Shortly afterwards though, the founder deleted the message.

Translated by the Chinese correspondent for CryptoSlate, the full message went something like this:

“Dear Friends, In the past few weeks, I had my darkest moment with sickness and tiredness. I suffered the biggest drama ever in my life from people’s doubting and questioning. I didn’t sleep all night yesterday, and deeply reflected on my memories and was introspective for my behavior and words—I felt ashamed for my over-marketing. I want to deeply apologize to the public, media, leaders, and the related regulatory authority who cared about me.

I bought the Warren Buffett lunch because I admire him a lot and I have a huge passion for charity. The original reasons are good and simple. I cannot deny that I also want to promote blockchain related business at the same time. However, because of my immature words, behavior, youth, and vigor, I spoke without thinking twice. It became a failing of over-marketing that was out of my control. It also generated an unexpected outcome for me. I ignored the responsibility of being a public figure. This was not my original intent. During the process, I was excited, then worried, then afraid, and now I’m regretful. This whole thing was bad for society and attracted the scrutiny of regulatory authorities. I want to say sorry again.

Caixin is a well-known journal that I have subscribed to and learned from since college. I have made great contributions to the overall situation of reform, [China’s] opening up, and overall economic development. Ms. Hu Shuli is also a senior teacher whom I respect and admire. Caixin continues to uphold the public interest of [Chinese] social responsibility. My priority, to let me see my limitations and smallness. I am sincere and fearful to communicate with Caixin. Nevertheless, I am willing to get the best media teachers in the business and engage in transparent, authentic, impartial, and unreserved exchanges with Caixin.

Mr. Wang Xiaochuan is also a predecessor in the field of internet entrepreneurship. I personally admire his achievements and respect his views. Originally, because I loved his jokes and young, energetic personality. I first hoped to create some hype and marketing gimmicks. In fact, I deeply regret this vulgar hype and marketing behavior, and once again express my sincerest apologies to Mr. Wang Xiaochuan. I hope I can get his understanding.

For the elders, leaders and regulators who care about me, I would like to express my sincere apologies for my premature marketing and words and deeds! I am deeply afraid of the adverse effects I caused! I am young, not well experienced in the ways of the world, and the blockchain is an emerging industry. I am immature. The overseers of the regulatory agencies and their great vigilance helped make me understand the importance of social responsibility and social influence! The healthy development of the industry is inseparable from proper supervision. I will also open my heart to the regulators who actively introduce structure and industry development to the sector, and will actively cooperate with the regulatory agencies for guidance, and do our utmost to satisfy them; to meet our requirements, to maintain timely responses, and establish long-term communication. We will always adhere to the principles of financial stability and security, resolve financial risks, and return to our focus on blockchain technology research and development.

I liked business in my youth, started my business very early, and I was very fortunate to catch up with the rapid development of socialism with Chinese characteristics in our country’s new era. I was lucky to catch the development of the global blockchain industry with support from many seniors in the industry. I was very fortunate to have achieved some success in the world blockchain. As a front-line practitioner active in the industry, I am very proud to be able to pass on the value of China’s blockchain around the world! It can be said that without the care and guidance of the regulatory agencies, there will be no healthy development of the blockchain industry today.

In the future, I will repair my shortcomings, reduce my vocalizations on Weibo, reduce the media interviews, and translate all the research and development from marketing hype to true blockchain technology. All of these are based on national interests, industry interests, and public interests. They abandon the selfishness of the self, actively rectify and abide by the law, export more positive energy for the development of the blockchain industry, do more for in-depth thinking, and establish a better social role model for the contemporary youth!

Finally, I say once again to the media, overseers, leaders, regulatory agencies, and the public who care about me, I sincerely say: sorry!”

The whole message is in direction to the fiasco related to the charity lunch with Warren Buffett - which was supposed to take place today (25th July) - and the allegations on Sun being wanted by Chinese authorities.

The above post was deleted not long after it was published but thanks to the power of the internet, we can still see what he put.

The charity auction that Justin sun won at the start of June put a smile on many enthusiasts’ faces. Not only could Sun be the person to persuade the American Venture Capitalist that crypto is a positive thing for the future, but we could see Buffett actively supporting the industry, given that Sun could encourage him to see the goodness in crypto.

Given that sun has postponed the lunch, and that there seems to be a deeper reason for it, that may now never happen.