in DeFi
by CryptoDaily 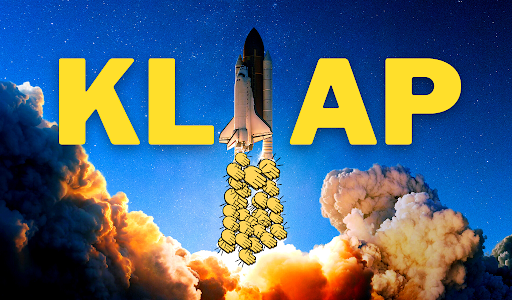 Klaytn Lending Application (KLAP) has released its native token. The second largest dApp on the Klaytn blockchain, KLAP grew to become the leading lending and borrowing protocol within days of its May launch. Now, its eponymous KLAP token is being distributed to early users of the platform.

The native token of KLAP protocol will have a total circulating supply of 1 billion, but just a fraction of that will be distributed initially – 6% to be precise. That’s calculated to be enough to seed initial liquidity pools, and to reward early users of the KLAP platform, leaving the bulk of the tokens to be distributed as rewards over time. The token became available for trading on decentralized exchange ClaimSwap on July 25 at 22:00 ET.

KLAP will serve as a governance token, as is standard practice for protocols issuing a native token. This will enable KLAP holders to vote on key decisions concerning new liquidity pools, reward rates, protocol upgrades and suchlike. There’ll also be a lot more that can be done with KLAP however.

The KLAP team has decided to go down the “ve” token route that was made famous by Curve and then adopted by such protocols as Frax Finance. In this system, users who lock up their tokens through staking for a lengthy period of time will be awarded ve tokens which are a virtual representation of their holdings; veKLAP in this case. While ve tokens can’t be sold on the open market, they do entitle the owner to other benefits such as yield boosters on liquidity mining rewards for both lending and borrowing.

Decentralized finance, which stagnated through late 2021 and early 2022, has begun to show signs of innovation once more. Trust in DeFi protocols has also risen, stirred by the spectacular collapse of CeFi apps such as Celsius and lenders like BlockFi and Voyager. The mantra “not your keys, not your coins” has been brought sharply into focus, sending retail users flocking to DeFi lending platforms such as Aave, Compound, and KLAP en masse.

The EVM-compatible Klaytn blockchain has been a huge hit in Asia, with more than a million wallets created since launch, even if it is less known in the West. The maturation of smart contract blockchains can be seen in the time it takes them to acquire a complete set of DeFi primitives including platforms for trading, derivatives, lending, and NFTs. With KLAP taking care of the borrowing and lending side of things, Klaytn now has a full stack, and it’s got the users too.

Tokens such as ETH, KLAY, and WBTC can already be posted as collateral on Klaytn Lending Application, whose TVL stands at $106 million. KLAP will soon be added to that list, enabling depositors to provide liquidity to earn a passive income, and borrowers to obtain collateralized stablecoin loans. Only KlaySwap DEX has more liquidity locked on Klaytn. KLAP will be hoping the launch of its native token can propel it to the top of the dApp charts.