in KuCoin Trading
by Crypto Daily 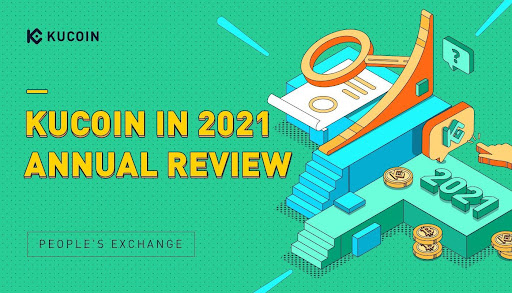 After demonstrating over 3,100% in price growth of its native KCS token, the KuCoin exchange has released its annual performance report.

The statistics provided in the report indicate that trading volumes in 2021 have experienced colossal increases, rising well above $1 trillion for futures and spot trading positions. Average daily volumes hovered in the $3 billion area, with the ATH of $13 billion being attained on December 4, 2021. The values indicate that trading volumes have been growing by over eleven times from year to year. The spot trading market is being considered as a major contributor to such growth, with KuCoin’s market share in the given segment rising from 1.42% in January of 2021, to 6.79% by year-end. The futures trading market share has also experienced growth from 0.48% to 3.09%.

User registrations are a major achievement for the KuCoin exchange, which has recorded yearly 1,100% increases in the given metric from year to year, overstepping the 10 million users mark in 2021. The majority of new users are stated to have arrived from Asia and Europe, with their respective statistical figures having risen by 21.5% and 16.8% in 2021. The growth in user registrations can also be attributed to the launch of the KCS ecosystem has resulted in massive migrations of newcomers and established users into mining and staking projects hosted on the platform. The result was the transfer of over $200 million in KCS tokens and the rise in popularity of such projects as MojitoSwap. The engagement and bootstrapping of user bases is playing an important role in pushing KuCoin’s scaling.

The price movement of the native KCS token has been directly impacted by overall exchange performance, experiencing over 31x in appreciation since the beginning of 2021, reaching an all-time high of $28.77 on December 1. One of the main reasons that has spurred such demand for the KCS was the altered approach to artificial deflationary mechanisms adopted by the development team. Instead of quarterly burns, the team is opting for monthly burning processes starting from January of 2022, with publically available data indicating that an estimated $37 billion, or 3,113,482 KCS, has been burned since the beginning of the year already.

Asset listings have been bolstered, according to the report, showing that KuCoin has added 348 new projects in 2021, including 80 first-time listers. At present, the exchange gives traders access to over 1,100 trading pairs across 630 assets, with more being added on a monthly basis.

The KuCoin team also expects that increases in staff numbers will continue throughout 2022, as the exchange will continue to develop and add new functions and features for its users.