Bitcoin (BTC) Is One Day Away From Making The Decision, Big Moves Expected Ahead

Bitcoin (BTC) has now reached a key decision point that is of extreme significance. We can see on the daily chart for BTCUSDLongs/BTCUSDShorts that the ratio has been on a parabolic rise since May, 2019. However, it has now come to a point where it will have to decide whether to maintain the uptrend or break it, whichever of the two happens, it has to happen now. This weekend has been inconsequential as most weekends before it, but BTC/USD is very likely to make the decision next week most likely the first day. Historically we have seen such parabolic rallies lead to massive downsides. It is important to realize that BTCUSDLongs/BTCUSDShorts ratio will break the trend for a reason and that will be a massive liquidation of longs and/or a sudden rise in shorts.

It is therefore important to remain focused on this chat to ascertain which way the market could swing next. The problem with being a retail trader is that most of the tools in your arsenal are useless. The vast majority of retail traders use indicators like the RSI or Stoch to predict market moves which is wrong on so many levels. Such indicators are lagging indicators not leading indicators which means by the time you spot a signal on them; the move is already reflected in the price. In such cases, for most retail traders it is therefore very important to at least pay attention to key factors like the Longs/Shorts ratio, Bitcoin dominance (BTC.D) and the like to get a better understanding of what could be happening in the market. If and when the parabolic uptrend in the longs/shorts ratio is broken, we can expect a devastating decline in the bitcoin market. However, before that uptrend is broken, there is a possibility that it could make yet another move to the upside. 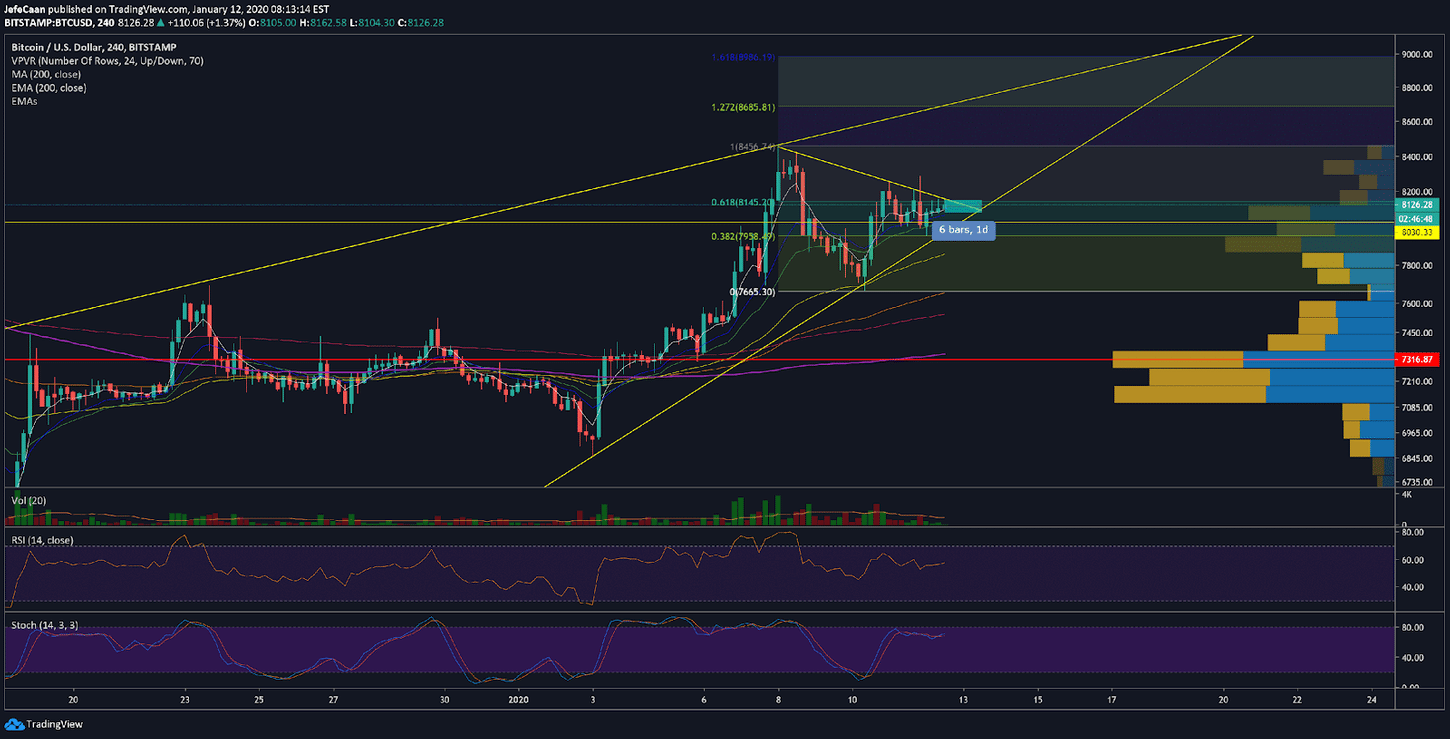 Bitcoin (BTC) is about to make a key decision on the BTC/USD front as well. We can see on the 4H chart that it has 24 hours to make that decision. If it breaks below the rising wedge, we can expect a sharp decline. However, if it shoots past the 61.8% fib retracement level, we can expect it to shoot towards $9,000. We might have a gartley pattern in the making on the 4H chart but it is important to wait for confirmation.

The bulls and bears are as divided as they can be at this point. As Bitcoin halving nears, the bulls have become more vocal in expressing their enthusiasm and optimism. bitcoin system bears on the other hand have become more reserved. Until and unless we see a break below the rising wedge, the bulls remain in control and could push the price higher. The price is now trading within a triangle inside the rising wedge which means that it will soon have to break out to the upside or to the downside. It is important to wait for confirmation and follow through because we might see a fake out before the actual move kicks in.