Just 21 Days Until An EPIC Dawn In Crypto Privacy 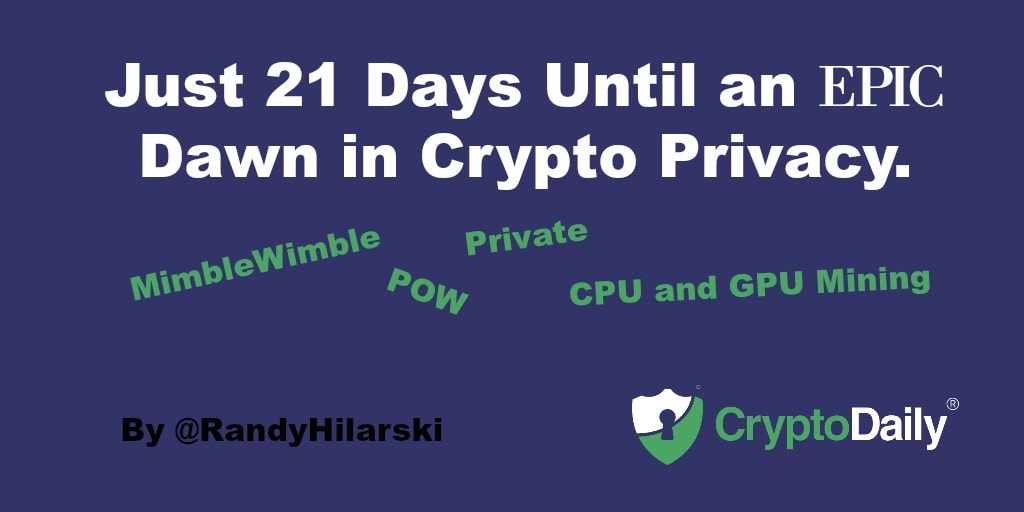 If you believe in your money being private and understand the power of POW then you should take a look at EPIC Cash. Using MimbleWimble the Epic Cash blockchain would be 10% the size of Bitcoins if we were to run all transactions on EPIC Cash from the beginning of Bitcoins blockchain.

Epic Cash is the final point in the journey toward true P2P internet cash, the cornerstone of a private financial system. The currency aims to become the world’s most effective anonymous form of digital money. In order to fulfill that goal, it fulfills the three principal functions of money:

Medium of Exchange – anything accepted as representing a standard of value and exchangeable for goods or services;

Store of Value – can be saved, retrieved, and exchanged at a later time, and of predictable value when retrieved;

Unit of Account – the unit by which the value of a thing is accounted for and compared.

Why EPIC Cash? It’s About Privacy in My Opinion.

There is an opportunity for the crypto community to still have a major aspect of their money preserved. It is privacy! Over the last few weeks, we have seen the discussions about Globalcoin the stable coin soon to be launched by our favorite privacy advocates Facebook.

The excitement behind such a project is disturbing to those of us who want privacy when it comes to our finances. The fact that Bitcoin is much less private than we thought has also rattled a few nerves.

EPIC Cash has successfully designed a coin that has eliminated wallet addresses and it also ensures IP addresses can’t be traced.

It does this through the integration of the Dandelion++ Protocol. Improving upon its predecessor, the original Dandelion Protocol, the Dandelion++ Protocol is a result of 7 researchers’ continued work to combat deanonymization attacks on the blockchain. Through Dandelion++, transactions are passed over random intertwined paths, or ‘cables’, and then suddenly diffused to a large network of nodes, like the pods of a Dandelion flower when blown from their stem. This makes it nearly impossible to trace transactions back to their origin, and thus their originating IP addresses. See Below

Now I know this is what everyone was waiting for. How do we mine EPIC Cash?

Check out the EPIC Cash Whitepaper for more information.