in Kukoin NFT'
by Adrian Barkley 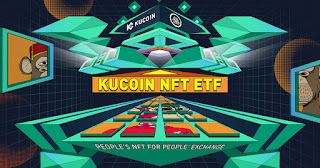 The KuCoin exchange has made another step to developing the NFT market with the launch of the NFT EFT Trading Zone. The product is intended to lower entry barriers for over 20 million users and make NFT investments with blue-chip backing possible on the basis of the USDT stablecoin.

“As a trading platform that is maintaining its rate of penetration in the NFT sector, KuCoin will continue to offer user-friendly products for investors, allowing them to easily participate in NFT investments,” as Johnny Lyu, CEO of KuCoin, stated on the launch of the NFT EFT Trading Zone.

The launch of NFT EFT Trading Zone comes as KuCoin celebrates the release of two other products catering to the NFT sector. The exchange launched the Wonderland NFT launchpad earlier in April, followed by the Windvane NFT Marketplace in May, bolstering its position on the market as a holistic service provider for all NFT-related operations. KuCoin’s products allow users to leverage convenient wallets, minting, exchange, trade and launchpad facilities while enjoying low commissions and advanced functionality.

“We are very excited to become the first centralized crypto exchange to support NFT ETFs that allow users to conveniently invest and trade top NFTs directly with USDT. In the future, KuCoin will keep exploring more NFT-related products for our users,” Johnny Lyu concludes.

KuCoin is intent on advancing the use of the NFT EFT Trading Zone, positioning it as a go-to solution for ETF NFT investments on the basis of stable and predictable pricing provided by the use of the USDT stablecoin. The exchange is confident that the NFT EFT Trading Zone will add maturity to the NFT sector and allow millions of users to partake in trading the NFTs of numerous attractive and fashionable projects.