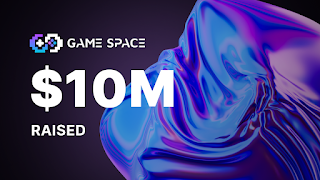 On June 25th, Game Space, the first platform to provide GaaS services (GameFi as a Service) on the entire network, announced that it had received more than 10 million US dollars at a valuation of $100 million. Huobi Ventures and Mirana Ventures announced their participation in the investment.

Game Space is the world's first GaaS (GameFi as a Service) platform, targeting large, medium and small gaming companies, providing GameFi as a Service for AAA games. With the Game Space SDK integration, games or APP can have the same blockchain functions as StepN, including NFT IGO and trading in less than 7 days of development. Game Space is positioned to provide a full spectrum of technical and business model support for traditional games to enter the Web 3.0 era and transform GameFi, reducing the time and capital cost of on-chain game development.

Huobi Ventures said that this investment will expand Huobi's business in GameFi. "We believe that Game Space will play an important role in the Web3 world. In the future, Huobi will work closely with the Game Space team to better support the development of the entire GameFi ecosystem."

Previously, Game Space announced that it had received millions of dollars in financing from leading venture capital funds, listed gaming companies and top-tier exchanges, and launched its first gamefi "Merge Bird" on May 10, attracting more than 15,000 gamers in one week.

Mirana Ventures partner David said that the GaaS platform provided by Game Space will help manufacturers focus on the development of business applications and therefore greatly reduce the entry threshold for GameFi. Through this investment, both parties will use their respective advantages to help more traditional gaming companies transition into Web3 industry more quickly, and promote the prosperity and development of the entire blockchain ecosystem.

According to Game Space CEO Michael Cameron, many traditional gaming companies want to take advantage of the current situation to enter Metaverse and get a piece of the action in the GameFi industry, but are having trouble doing so due to the general lack of blockchain ability. The rise of Game Space provides the industry with a full-featured SDK , which means that gaming companies can simplify complex on-chain development into simple integration in just a few lines of code, and can even complete deployment and go live in as short as 1 day.

In a live broadcast jointly held by Game Space and Huobi on May 24th, Michael Cameron revealed that the platform's first game demo "Merge Bird" took only 7 days to go on-chain. The broadcast was watched by more than 10,000 people.

Game Space also recently cooperated with ByBit by launching 3,200 Bird Mystery Box NFTs on the ByBit NFT marketplace which will allow Gamers to be able to use their NFTs for use in the Merge Bird game, trading on the Game Space NFT Marketplace and Bybit NFT Exchange. In addition to gaming and trading, users will be able to merge the bird NFTs to create a higher-level bird in-game which can be used as a unique PFP (profile picture).

Supporting multi-chain deployment is a major feature of Game Space. The first pain point encountered by all games entering Web 3.0 is often "which chain to deploy on". It is often difficult to decide whether to use the most popular and widely accepted Ethereum or a new public chain with better performance.

The full-featured NFT market is standard in GameFi. Game Space provides a marketplace with more than 160,000 NFTs accumulated and embedded in the game, allowing users to complete NFT transactions without having to jump between different marketplace or using 3rd party services. Game Space also provides NFT management functions including Mystery Boxes, AirDrops, and Auctions in its admin panel, and allows games to attract gamers before launching by pre-selling in-game NFTs.

“We are excited about the many AAA-level gaming titles that will be launched in the second half of the year. At present, dozens of games are being tested and are integrating GaaS services provided by Game Space. Next, we will work with more large, medium and small game companies," said Game Space CEO Michael Cameron.