in Blockchian Crypto
by CryptoDaily 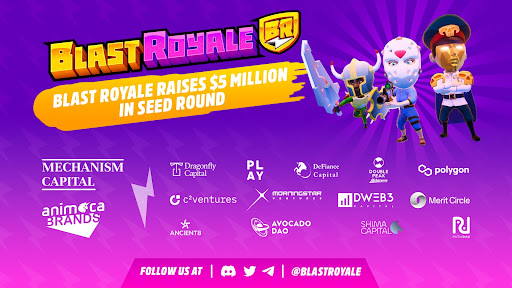 “We are thrilled to have such strong backing from some of the most influential investors in blockchain gaming. All of our partners share our vision for making Blast Royale one of the best gaming titles, providing compelling, fun gameplay and creating a Battle Royale game suitable for the Web3 generation,” said Neil McFarland, CEO of First Light Games.

Blast Royale is a battle royale survival match that sees 30 players enter the fighting grounds in a ‘last one standing’ battle. The players’ then fight for rewards and build up their character using items collected as non-fungible tokens (NFTs) within the game. The players’ meta inventory influences the quality of items carried into a match. The game has two modes; free-to-play, or purchasing and equipping three NFTs to your character, enabling players to earn Craft Spice tokens ($CS) when playing matches. The game rewards players based on their performance, invested time, and overall effort.

With the latest funds injection, Blast Royale will be able to broaden its gaming community, develop and enhance its gameplay, attract top talent, and for marketing purposes. The gaming project is currently in the testing phase, which will be complete in Q2 2022. Once the testnet phase successfully concludes, Blast Royale will launch globally in Q3 2022, with a promise “to challenge the conception of what blockchain gaming can be “ and its future.

Built on Polygon, a layer 2 scalability solution, Battle Royale offers the players faster transactions, reduced latency, and lower fees. This ensures the players are able to maximize their profit earnings, by reducing the cost of withdrawals from the game to NFT marketplaces or DEXs. The game primarily uses two native tokens; $BLST, the primary token that is used when minting new NFTs and on its marketplace and $CS, the in-game play-to-earn tokens that can be used to buy in-game equipment and boost your character’s weapons and features.

“We are very impressed with the high quality of gameplay in Blast Royale,” Yat Siu, the executive chairman and co-founder of Animoca Brands stated. “Given the progress so far and the First Light Games team’s strong pedigree of several iconic hit games, we believe that Blast Royale will be an appealing and compelling metaverse entry for a new generation of gamers.”

With a goal to revolutionize the GameFi (gaming and DeFi) industry, the latest funding brings First Light Games a step closer to the goal. The team is however not stopping at the current portfolio of gaming titles and platforms. Blast Royale will include a competitive metagame layer that gives players strategic agency over the optimal loadout to bring into battle. Finally, First Light Games is also planning on adding tournaments, betting, and high-stakes Blast Royales later in the year, with its eyes in the esports industry.