Technical analysis suggests that Bitcoin may well have reached a bottom as it fell to $40,600, and made a third touch on a trendline that has been in play since September 2020. However, the market is still waiting nervously for a confirmation of the bounce.

The crypto market has been on a downwards trend since it attained a high of $68k in November of last year. So far the correction has amounted to 41%. Is this it, or will there be more to come?

Some kind of a relief rally did take place over the weekend, and Bitcoin rose as much as 5.6%. However, Monday morning has seen the price move back to $41,500 at time of writing. A confirmation touch of the trendline at $40,600 could well be on the cards.

An approaching death cross won’t exactly improve sentiment. The 50-day moving average is about to cross down over the 200-day moving average, possibly by Thursday of this week. This would then mean that Bitcoin is once more technically in a bear market.

Some analysts are saying that Bitcoin is in a position similar to the May/July dump, when the price bottomed at around $30k, and then spent three months in the area before lifting off and eventually making the all-time-high in November. 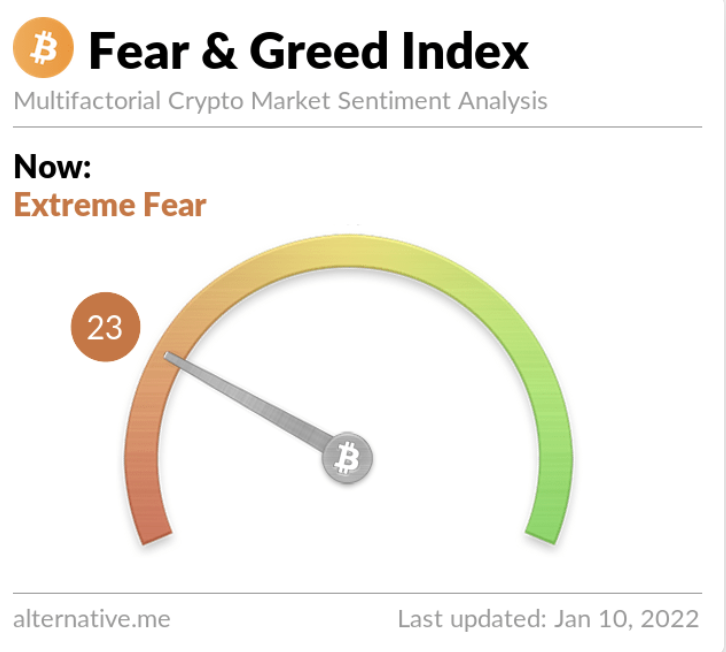 Buying when blood is on the streets is certainly good advice, and in this situation it certainly could be the right thing to do. Sentiment is low, and the Fear and Greed Index is lower at a figure of 23, compared to last week’s 29.

Both the Stochastic and the RSI have entered oversold territory so averaging into Bitcoin as well as into some of the major and fundamentally sound alts could be the right play to make.

However, all eyes are still on the Fed. Will chairman Powell be able to shut off the spigot that pours cash into the Wall Street trough, and then be able to make the 3 interest rate hikes that he said he would?

Should this actually happen then it could make things more difficult for the crypto industry over the course of the year. But saying is one thing, doing is something else entirely. When tapering ends in March we will see how the market has reacted. It may well be that the spigot gets turned on again and Bitcoin gets its chance to flip the bull market switch back to full ahead.