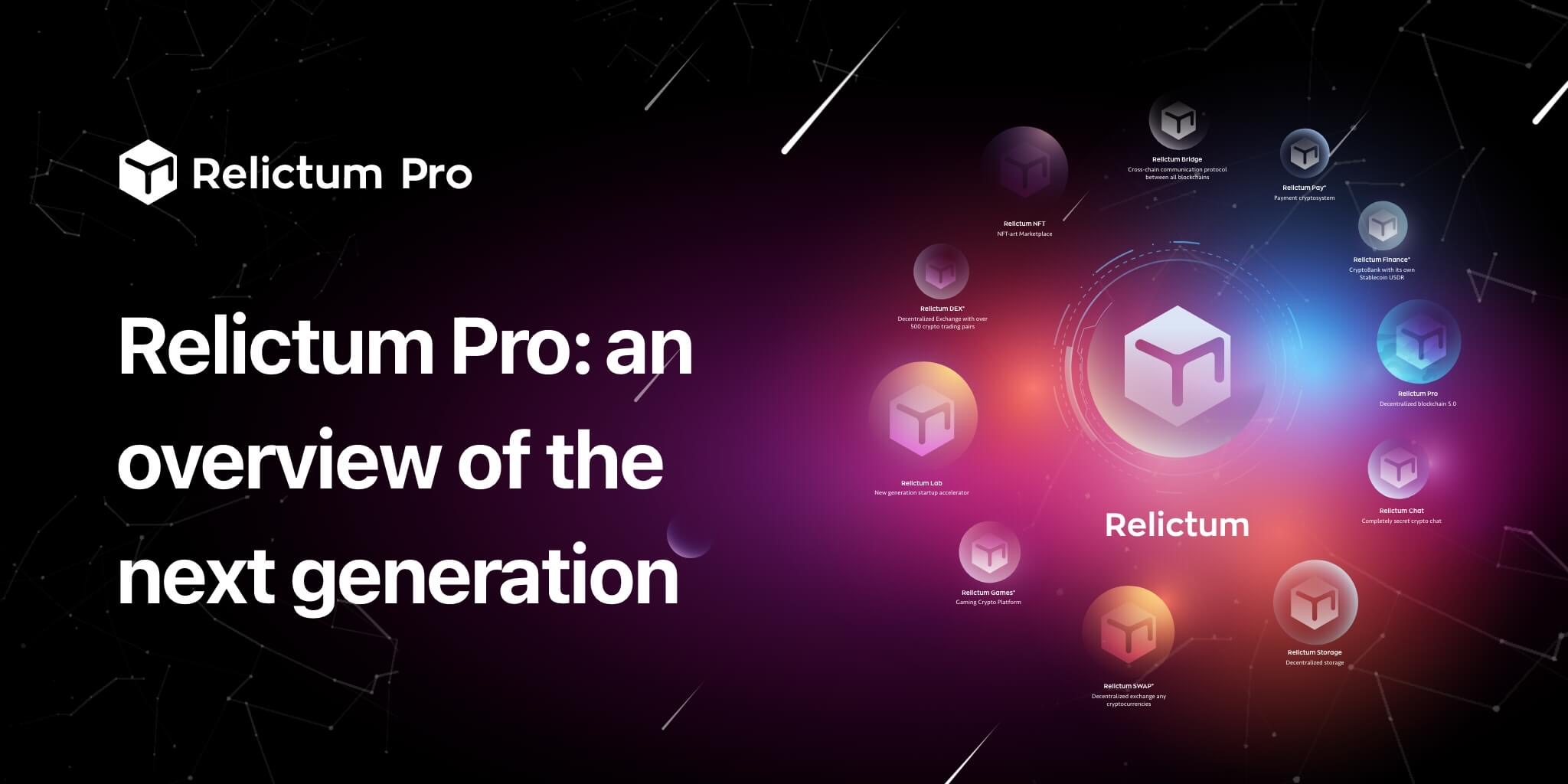 Despite the popularity of high-demand blockchains like Bitcoin and Ethereum, they are technologically outdated and have some problems with scaling and bandwidth, resulting in slow and expensive transactions. For example, commissions reach $300 in the Bitcoin blockchain and $1500 in Ethereum!

Ethereum has become the largest platform for building decentralized applications: crypto exchanges (DEX), landing protocols, and NFT marketplaces. A large number of DApps and high user activity exacerbate the situation, while current Layer-2 solutions, such as Polygon, do not significantly change the situation.

To solve this problem, they have to rethink the approach and develop a completely new protocol that complies with scalability and performance principles. And Relictum Pro is one of these protocols, it will be considered in the article.

What is Relictum Pro and how it changes the game?

Relictum Pro is a digital blockchain platform with instant and free transactions and a developed DeFi infrastructure. The Relictum Pro ecosystem includes decentralized services and applications that provide access to a wide range of DeFi financial products: trading (swaps) on DEX, deposits, launching own startups, auctions, payment systems, and games.

The platform solves one of the main problems of the crypto industry – inefficient and slow services on the blockchain. Due to a large number of users, the cost of transactions increases because a block can accommodate a limited number of transactions, and miners give priority to users who pay higher fees.

Because of this, large queues of unconfirmed transactions are formed in mempools, and for a transaction to be added to a block, it is necessary to increase the commission rate. Besides, dated platforms are unable to scale, that is, their throughput cannot be increased due to the fixed block size and the rate of its mining.

Relictum Pro developers have presented an innovative platform in which transactions are confirmed instantly, and users can make an unlimited number of transactions without paying any fees for the transfer. When testing the platform, the team achieved a result of 100,000 transactions per second, and according to calculations, the protocol can scale up to 1 million transactions.

How the Relictum Pro protocol works

The platform architecture is based on n-dimensional smart contracts and a new type of blockchain network that uses its own Proof-of-Tsar (PoT) consensus algorithm, which we will discuss in more detail a little later.

The protocol is based on the Master Chain – the main blockchain that stores hashes of all events that happened on the Relictum Pro blockchain. These hashes cannot be deleted or modified, which prevents data tampering.

PoT is a consensus algorithm developed by the Relictum Pro team. The Proof-of-Tsar consensus uses a unique communication technology between the nodes of the HyperNet network – a virtual circuit switching network based on the TCP/IP protocol, which provides the basis for communication between Relictum Pro nodes.

The nodes in the Relictum Pro network are identical, but according to their functions, they are divided into five different types, which are assigned automatically when the nodes are started for the first time:

●           Master node stores blocks formed over the entire time of the network operation.

●           Sleep node connects to the network in case of a failure and when the node is first started.

●           Sky node is created and operates when a user interacts through the web page.

The network is organized in such a way as to eliminate the problem of double-spending using the continuous numbering of the Master Chain blocks. This is achieved since a validator node at the time of adding a transaction is not aware of this fact: the network is reorganized every 5 seconds. Due to this, the probability of a hash collision occurs only after a long period, when it becomes irrelevant.

The Relictum Pro economy is based on GTN genesis tokens and USDR stable coins. GTN token holders are provided with the right to intellectual property, which is the source code of the platform. 50% of the generated 10 billion GTNs are distributed to investors during several rounds of the token sale, which is currently taking place: so far only 25% of GTNs have been sold.

USDR stable coin allows you to access any services and platforms that use digital assets. The main advantage of USDR over the most popular stable coin USDT on the Ethereum and Tron blockchains is zero transaction fees and a token burn mechanism.

RELICTUM is an ecosystem of global projects that solves the problems of the real sector of the economy using blockchain technology of the fifth generation and reveals the capabilities of the blockchain industry for various areas, this is a strong community from 193 countries around the world, these are your opportunities for creativity and business solutions!

The RELICTUM ecosystem consists of a powerful set of tools, including:

1. Relictum Pro - Decentralized Blockchain 5.0 with instant and free transactions, available on any device.

2. Relictum Finance - CryptoBank with its own stablecoin USDR, 100% backed.

6. Relictum DEX - A decentralized Exchange with over 500 crypto-trading pairs.

7. Relictum SWAP - A decentralized exchange of any cryptocurrency.

8. Relictum Bridge - Transfer of transactions between all blockchains through a unique bridge protocol.

This is a decentralized crypto bank. The USDR stable coin, created by the Relictum Pro team and pegged to USDT is used to access the services of Relictum Finance. Users can quickly exchange USDT (ERC-20 and TRC-20) or Fiat for USDR and receive forging income.

Startup accelerator for launching blockchain projects based on the Relictum Pro protocol. The platform provides a venture fund for startups and helps to obtain funding for promising projects using blockchain technology. All projects are selected by a team of startup accelerator professionals. More than 20,000 Relictum Lab members have invested over $ 10 million in USDR tokens.

Decentralized exchange trading over 500 pairs of digital assets is also available in the ecosystem. Users get access to the terminal through their wallet: the exchange is made through smart contracts, and the funds remain on the personal accounts of users to which the exchange does not have access.

The main advantage of Relictum DEX is an instant exchange without commissions thanks to the platform's blockchain. Besides, the creators of crypto projects can conduct token sales on the exchange, and after that their tokens will be listed with Relictum DEX.

Popular crypto-assets such as Bitcoin, Ethereum, and Litecoin are also available on the Relictum DEX platform. When exchanging, users receive tokenized assets of BTC, ETH, and LTC, which can be converted into original cryptocurrencies and withdrawn to their wallets.

Decentralized storage based on the blockchain, created on multi-contracts, which speed up the search for fragmented parts of files and, as a result, their download. According to estimates, the download speed of files from Relictum Storage is higher compared to conventional P2P platforms, and the cost of cloud storage services is ten times lower: 50 GB of space costs only $5/year.

Storage security is achieved by decentralization: users can only access a fragment of the file, which prevents the possibility of data leakage from which centralized services suffer.

A cross-platform, secure, decentralized messenger where users can securely and anonymously exchange messages and create secret chats through the HyperNet virtual channel network.

All the messages and chats are securely encrypted, and conversations can only be accessed using a private key that only their participants have. This means that no outsider will be able to access the correspondence without a private key.

The Relictum Pro platform is rightfully considered unique and innovative: there is currently no protocol offering instant and free transactions on the blockchain other than Relictum. Besides, platform users get single access to a full-fledged ecosystem.

Thanks to this, there is no need to use different protocols and transfer assets between blockchains to gain access to various financial services in the DeFi market.

Soon, the team will expand the platform's functionality and add new decentralized products:

●           Relictum NFT is a marketplace for issuing and trading non-fungible tokens.

●           Relictum SWAP is a decentralized AMM with instant swaps and liquidity pools to generate income from pharming.

Join our community and become part of the Relictum metaverse!