in Altcoins Spotlight
by Laurie Dunn

The crypto market crash over the last few days saw some wild price movement. On Saturday in particular, USD dominance shot up 30% in just one daily candle. However, the UST stablecoin kept its peg beautifully. Do we now have the proof that this will become the dominant stablecoin for the entire crypto space?

The crypto market experienced a capitulation on a grandiose scale over the last few days. Investors flocked to the relative safety of stablecoins such as USDT and USDC. However, many went into UST, and despite the gut-wrenching price action, the peg to the US dollar held up perfectly.

On the Crypto Banter YouTube show, compered by Ran Neuner, the show host talked about his excitement at seeing this algorithmic stablecoin actually keeping its peg better than the other stablecoins, and displayed a tweet calling UST “The King of Peg”. 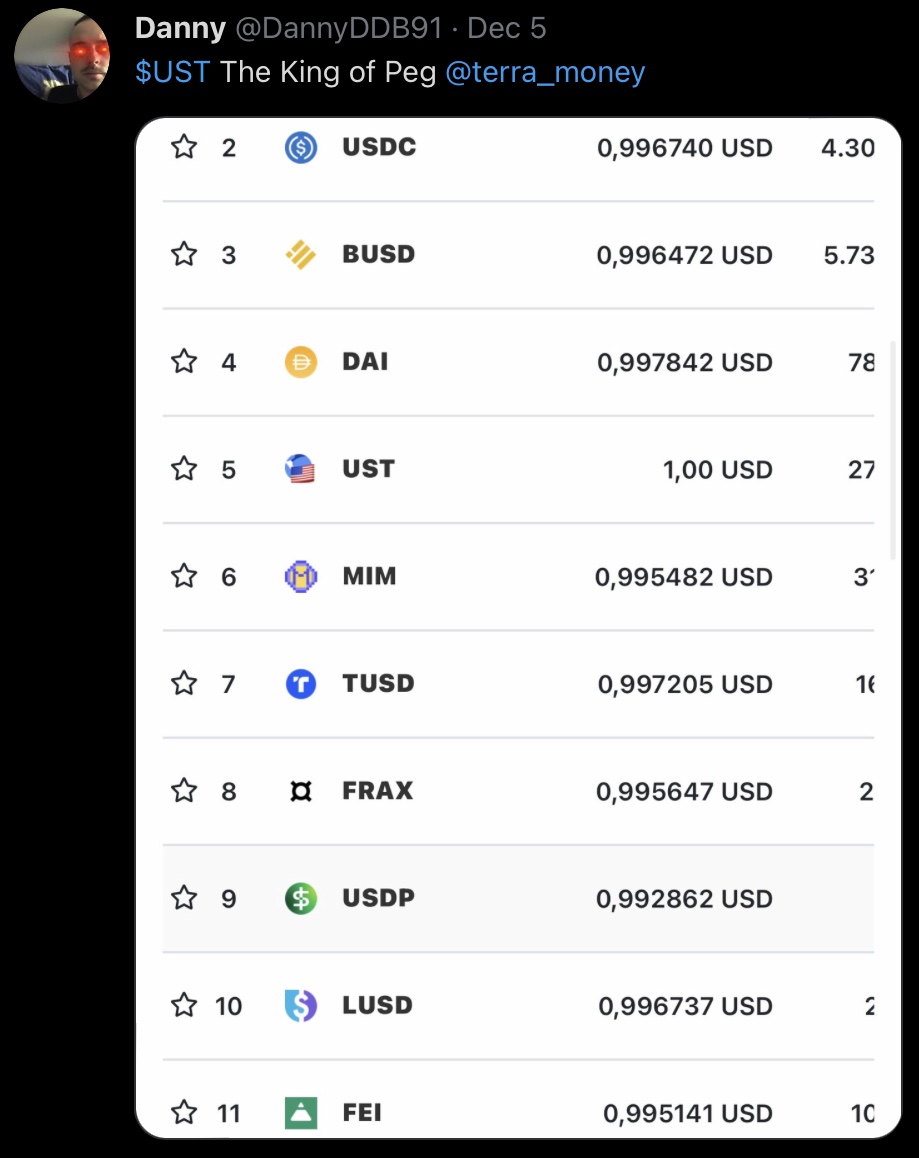 Neuner spoke about how other stablecoins were also tested to the extreme, and the vast majority of them failed. USDC and BUSD lost their pegs, and the DAI chart to USD suffered a particularly bad drop from the peg.

The Terra LUNA cryptocurrency has been on a tear very recently, with a 9-day surge of 106%. It even hit an all-time-high at the worst of the dip on Saturday. Now that the market is bouncing again, LUNA is heading back to these highs, and is currently at nearly $74, just $4 short of its maximum so far.

Ran Neuner has been expounding on his thesis during his shows, that LUNA is going to be the best performing altcoin in December. He points to the fact that the ecosystem is now getting built out, and that the TVL (Total Value Locked) on Terra is just under $13 billion, which is ahead of the Solana blockchain, and just behind Binance in the number 2 ranking.

“Just take a minute to understand how far this ecosystem has come, where we can have an algorithmic stablecoin hold better than a US dollar based stablecoin.”

Neuner believes that the next layer one chain to have a big surge in price, together with its ecosystem, is Cardano. He is predicting that ADA will start its run in January and into February.