August has gotten off to an exciting start in the parallel worlds of stock market and cryptocurrency investing. After a slow start to trading, Robinhood’s shares have picked up over a wave of retail and institutional sentiment, whilst the cryptocurrency market has sparked into life following aggressive pullbacks throughout Q2 of 2021. Now, with plenty of reasons for optimism, could the revival of Bitcoin, Ethereum and other cryptocurrencies drive Robinhood’s stock up further?

Robinhood has grown into the world’s favourite retail investment app, with a lively user base and download rates that have outperformed all of its competitors across both traditional investing and cryptocurrency landscapes. 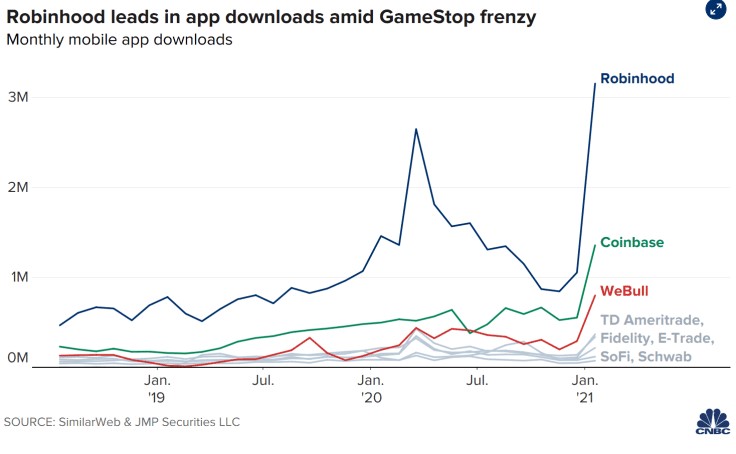 Here, we can see that Robinhood’s downloads since 2019 have far outpaced their rivals, including leading cryptocurrency exchange Coinbase. However, we may be about to see what this widespread adoption does for Robinhood’s stock prices after the company launched its long-anticipated IPO at the end of July.

Robinhood profited from a huge rise in retail investors arriving on the market in the wake of the Covid-19 pandemic in mid-2020, as we can see from the spike in downloads above. 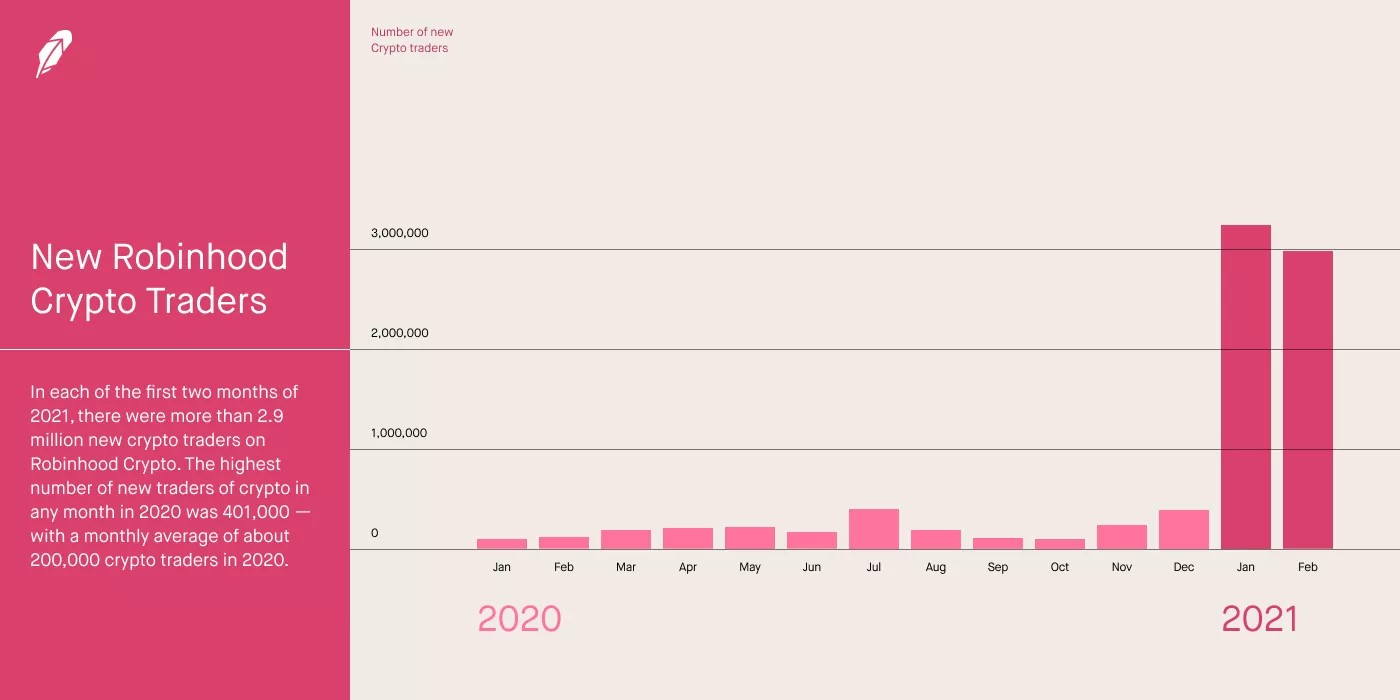 As we can see from both charts above, both downloads and the number of new cryptocurrency traders spiked in early 2021, after Robinhood found itself in the headlines for the part the app played in the GameStop short squeeze of late January.

With an average of 3 million new cryptocurrency traders arriving in January and February, the app has made some serious inroads into the world of Bitcoin, Ethereum and even with meme-coins like Dogecoin.

In going public, we’ll soon see just how significant Robinhood’s connections to crypto are, and whether the company’s stock is strong enough to move in line with a market that appears set for a resurgence over the coming months.

Volatility appears to be something that Robinhood appears to have in common with the world of crypto. After a disappointing IPO in which the platform debuted at $38 - the lower end of its offering range, heavy levels of sentiment saw prices surge one week on from its debut before a cool-off. 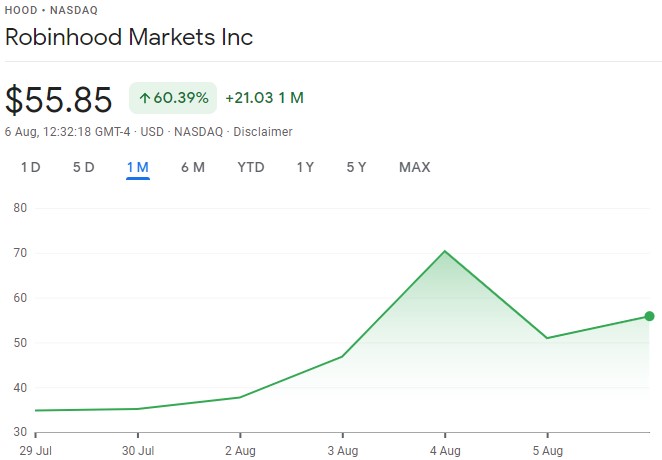 At the time of writing, Robinhood is up some 60% on its initial listing price, with prices fluctuating wildly between rallies and pullbacks.

There appears to be many factors behind Robinhood’s early volatility. The company took a largely unprecedented step of reserving between 25% and 30% of its IPO shares for the retail investors it serves on its app - some 301,573 investors, or 1.3% of the app’s user base, bought the IPO, which may be part of the reason behind the platform’s modest start to public life.

However, following the listing, sentiment for Robinhood shares reached fever-pitch. Robinhood’s stock price surge coincided with a rise in mentions in Reddit’s infamous r/WallStreetBets forum. According to sentiment monitoring platform, SwaggyStocks, Robinhood was by far the most mentioned stock on the forum over 24 hours in the middle of the week after its listing - with 1,700 mentions. This by far outpaced second placed AMD which amassed only 388 mentions and is likely to have set the foundations for a surge in price.

Given Robinhood’s relationship with sentiment-based cryptocurrencies and meme stocks, it’s interesting to see that the investing platform’s stocks appear to be performing based on social media speculation itself. But as the stock finds its feet on Wall Street, could we see other forces begin to drive the value of HOOD?

Although cryptocurrency is built on decentralized blockchain technology, it still has something of a symbiotic relationship with Wall Street. The crypto marketplace and the stock market alike struggled as the Covid-19 pandemic took hold before an influx of retail investors helped to drive a recovery across a range of industries.

The past year has also given us a glimpse into the effect that major cryptocurrencies can have over Wall Street. For instance, MicroStrategy, a prominent business analytics platform spent much of the past 12 months utilizing Bitcoin as its primary reserve asset. Today, the company reportedly holds 105,085 BTC, the equivalent to almost $4.5 billion USD at the time of writing. 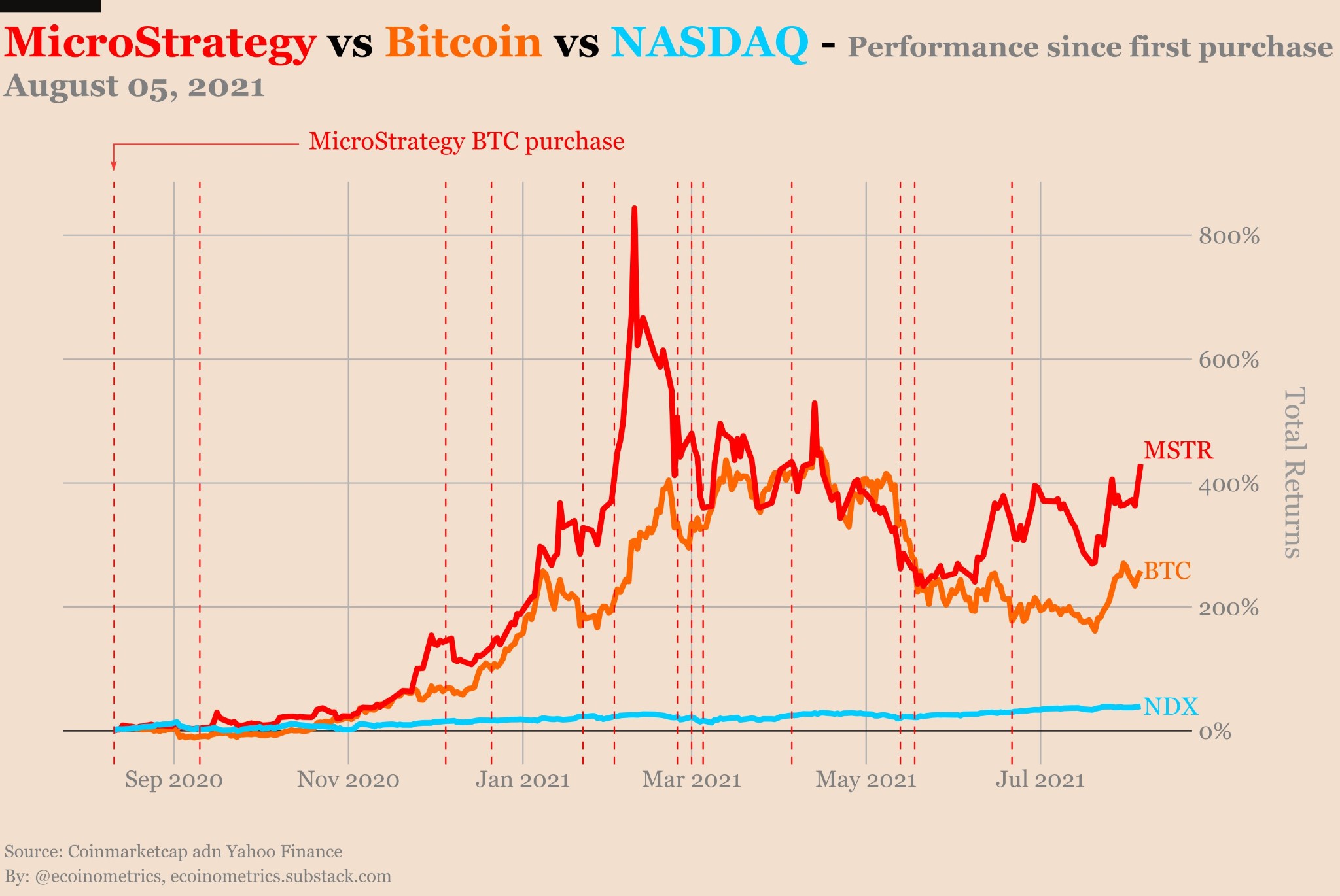 As we can see from the chart above, this heavy investment in Bitcoin has caused MicroStrategy to behave in a far more similar manner to Bitcoin as it does to the Nasdaq exchange that the stock is a part of.

Although these tandem market movements can appear to be highly appealing during boom periods, it’s also important to highlight that these companies are at the mercy of BTC pullbacks that could be sparked by events that are out of their control.

For instance, Maxim Manturov, head of investment research at Freedom Finance Europe notes that “the crypto market lacks stability and can start being regulated any time, which actually already happened in China. In June, the Chinese government banned banks and payment systems from using Bitcoin, which led to a temporary collapse of the flagship crypto's price.” 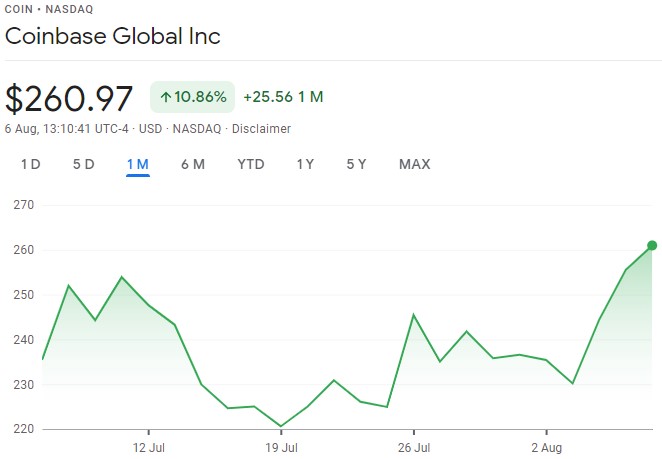 Bitcoin’s recent uptick in value may also be reflected in the stock price of Coinbase, which has shown signs of recovery following the misfortune of making its public debut shortly before a significant crypto market pullback, back in April 2021. However, Maxim Manturov, believes that it’s not yet time to invest in Coinbase, saying “In our view at the moment, it is not worth buying Coinbase shares amid recent news - SEC may file a lawsuit over the company's new Lend product, falling bitcoin price and others. The drop in bitcoin price was on the back of El Salvador recognising bitcoin as legal tender.

Also, after the Q2 report, the company expects trading volumes to decline in Q3, which could lead to higher costs and lower profitability for the company. In the short term, this could put pressure on Coinbase's price, which could lead to a weak rise in the company's shares. For example, analysts at Mizuho Securities believe Coinbase may have lost some bitcoin market share, with retail users trading less and institutional investors' returns continuing to fall.

Overall, to consider buying Coinbase stock, one should wait for a breakdown of the 260 level with an upside potential of 280-285 in the short term. For a longer-term buy, it is worth waiting for bitcoin to stabilise and for the SEC to decide on the company's new product.”

As one of the world’s leading retail investing apps that offers users the opportunity to buy into major cryptocurrencies, we may see the fortunes of Robinhood influenced by the performance of Bitcoin and various altcoins. Given the astonishing year 2021 that crypto has had so far, Robinhood may have launched just in time to ride the Bitcoin revival.