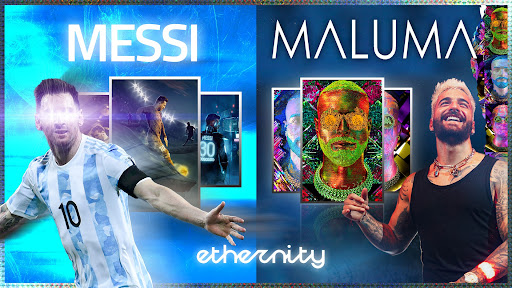 NFTs are not only increasing in volume but becoming mainstream as well. In the first half of 2020, only $13.7 million worth of NFTs were sold. By the time we completed the first half of 2021, the market had risen to a new high of $2.5 billion in sales. Collectibles were the most popular category, selling more than 367,000 NFTs in the first six months of 2021. However, populous categories, such as sports, arts, and games also scored high on units sold, indicating a growing interest in the general population about non-fungible tokens. Almost 300,000 NFTs were sold in the Sports category, while the field of arts registered more than 124,000 in unit sales, and games registered nearly 73,000.

One of the most recent additions to the list of prominent and popular artists leveraging NFTs is Maluma, the famous Latin Grammy Award-winning superstar.

Maluma Partners With Ethernity Chain Before His Imminent World Tour

Ethernity is one of the most well-known NFT projects that auction verified artworks in tokenized format. Not only does it feature authenticated artworks of top artists, but it also includes stars and eminent personalities from the world of sports, music, film, gaming, tech, history, and entertainment.

Maluma has partnered with Ethernity chain on what is seen as a "revolutionary visual effects NFT art series." The NFT drop will also feature an ensemble of unshared photographs from Maluma’s life and unseen footage from the artist’s life.

Alejandro Robledo Mejia processed the footage into fine gold sheets and subsequently mapped them onto Maluma’s 3D face. While the photographs would dissolve into gold, the drop would also have a custom-built frame that Maluma sketched himself along with his handwritten personal note signed into the artwork.

Nick Rose, the CEO of Ethernity Chain, is excited about this upcoming NFT drop. His elation about the collaboration becomes amply evident when he says, "We live for this type of partnership." He also thinks that this collaboration would be the next step for Ethernity as well as for NFTs.

Overall, the project combines the pure artistic value of NFTs with that of advanced cryptography. The tokenized artwork will be up for people to see on stage during Maluma’s upcoming 2021 Papi Juancho World Tour.

Before Maluma, it was legendary footballer Lionel Messi’s turn to make a move towards NFTs. He believed that NFTs were another way to connect with the fans. Comparing the agelessness of art with that of football, Messi launched his first official NFT in collaboration with Boss Logic and Ethernity.

The exclusive images created by BossLogic reflected the successes in Messi’s career. Ethernity platform, on the other hand, hosted the Messiverse collection for purchase. These NFTs were titled "Man from the Future," "Worth the Weight" and "The King Piece," while the creative agency Impossible Brief had another piece to release.

The overarching theme of the NFTs is to highlight the achievements, moments, team love, and future accomplishments surrounding Messi, the man himself.

The popularity of the NFTs, and their adoption by sporting legends, is undoubtedly reflective of the fast mainstreaming of the tokens. Even before Maluma and Messi, Ethernity collections featured other legends like Muhammad Ali and Pele on their collection.