in DeFi NFT
by Crypto Daily 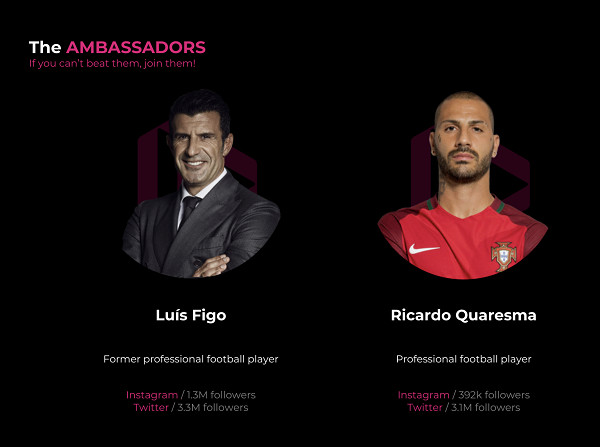 A Big Move For dotmoovs

Blockchain startups often struggle to gain initial traction with their target audience. Most people on this planet do not see a need for a blockchain, let alone services that use it. Getting brand ambassadors on board is an essential step to change that narrative for the better. In dotmoovs' case, the team successfully recruited Luis Figo and Ricardo Quaresma to help increase the appeal of this blockchain startup.

With the help from these Brand Ambassadors, dotmoovs can gain broader traction among fans of both professional football players. Sports enthusiasts will gain exposure to cryptocurrencies and Non-Fungible Tokens through dotmoovs' unique online competition application. Anyone can enter a competition with other players to show off their football skills.

The built-in artificial intelligence will independently review every player's performance and determine the winner. That winner then receives MOOV tokens or NFTs. The competitive aspect of this offering ensures players will always try to become better and beat their opponent. Gamifying the showcasing of one's skills and adding incentives to it will open up the football world to more people, regardless of race, gender, or location.

Expanding The Appeal of Football

For dotmoovs, the initial focus lies with football. Its Football Freestyle is the first gamified competitive sport on the platform. To expand the appeal of this option, the dotmoovs team reached out to multiple former football players for feedback on their approach. Luis Figo was the first to see merit in this option and became an initial backer of the platform.

“During the Covid pandemic in 2020, football fans around the world have been forced to explore new ways of playing their favorite sport. Though, thankfully, the worst is now over, I believe that new ways of combining digital with physical sports will take their place together with the good old-fashioned game on the football field.”

More importantly, the dotmoovs vision shares similarities with the Luis Figo Foundation. This organization promotes and develops various projects that span sports, education, social action, and health. The competitive nature of dotmoovs' Football Freestyle struck a chord with Figo and Ricardo Quaresma, who is known for his multiple tricks, including the trivela and rabona.

As young fans look up to these renowned individuals and their successful careers, they make great Brand Ambassadors for dotmoovs and what the team aims to achieve. Facilitating global competition via an AI-based video referee highlights the potential of blockchain connecting people from all strides of life.