Fears over the coronavirus and growing concerns over a recession due to the spread of the pandemic stifling the economy, have caused all markets to tumble, including cryptocurrencies.

The Dow Jones Industrial Average just had its worth single-day decline since 1987 and Bitcoin saw one of the largest single one-day collapses in the history of the emerging asset.

The move spooked investors and traders that were already on edge, fearing the impact of the coronavirus. The result was a panic-induced selloff of extreme proportions.

The severity of the move caused over $1.4 billion in liquidations across the crypto market. As each long was liquidated, a cascading effect of hitting stop losses, also called a “long squeeze,” occurred of epic proportions.

It reached the point where order books were nearly completely empty on most platforms, as even high-wealth whales and “smart money” were too afraid to buy at such lows during this ongoing and escalating crisis.

During the price action and the extreme market volatility, cryptocurrency exchanges experienced flash crashes, froze, or were manually taken offline due to liquidation engines going haywire.

Different exchanges appeared to experience unique problems at different times, suggesting that nearly all platforms were left in disarray after the surprise and shocking move.

Among the first platforms to get hit, was Binance. Binance experienced a flash crash on the cryptocurrency called Chainlink, taking the price of the asset to just 0.0001 USDT. 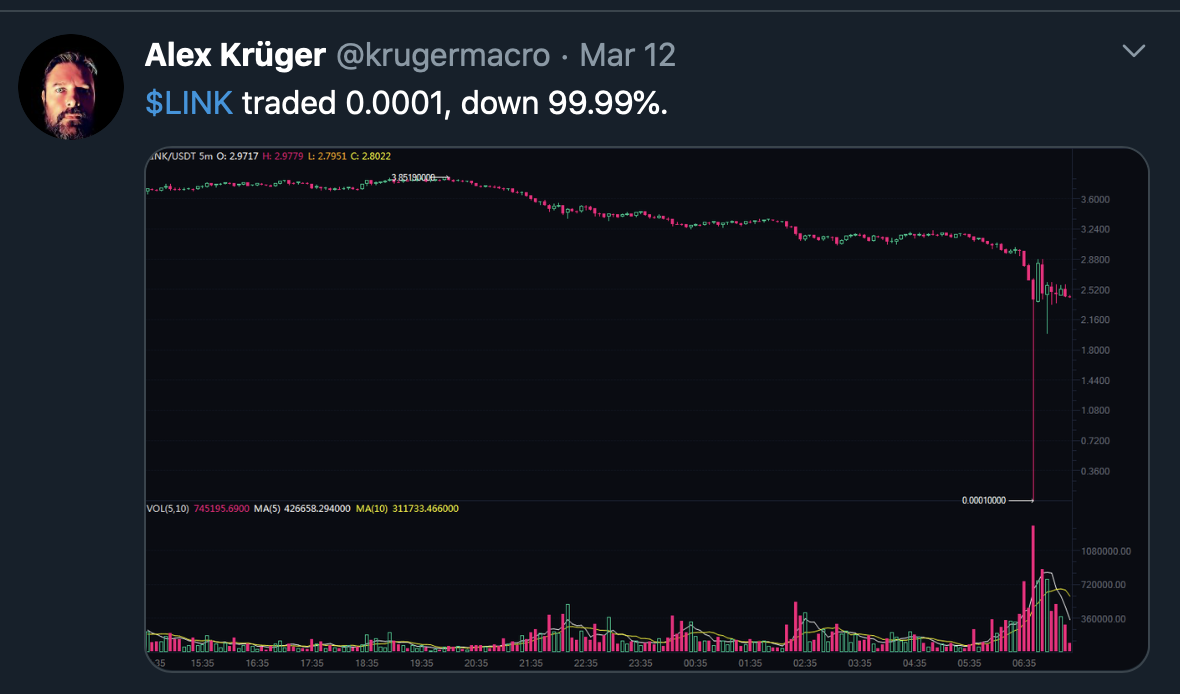 The cryptocurrency was among the year’s top performers in 2019, and started 2020 with a bang, hitting an all-time high last week while the rest of the market dropped.

To show the severity of the move, just two weeks earlier, Chainlink reached an all-time high of nearly $5, then fell to under a penny. The asset is now trading under $2.

Margin trading platforms let crypto traders put up their cash or crypto as collateral, so they can amplify the profit they make from any powerful price movements.

But when the market moves the other way, stop losses are hit, closing out these positions and causing an order to trigger opposite the original positions. This means that any long orders, when they close, act as a sale of Bitcoin and can cause the price to drop. And when margin applied to positions fails to cover the full deficit in price, the position will be liquidated.

Even liquidations of longs act as a sale of BTC. When this was happening at such an extreme rate last night, it was causing the price of Bitcoin to drop like a rock.

Margin trading platforms BitMEX and Deribit both had to be taken offline in order to prevent the market from total collapse due to rapid liquidations and not enough liquidity on these platforms.

Deribit had nearly their entire insurance fund wiped out during the move. It took over two years to build up the fund. 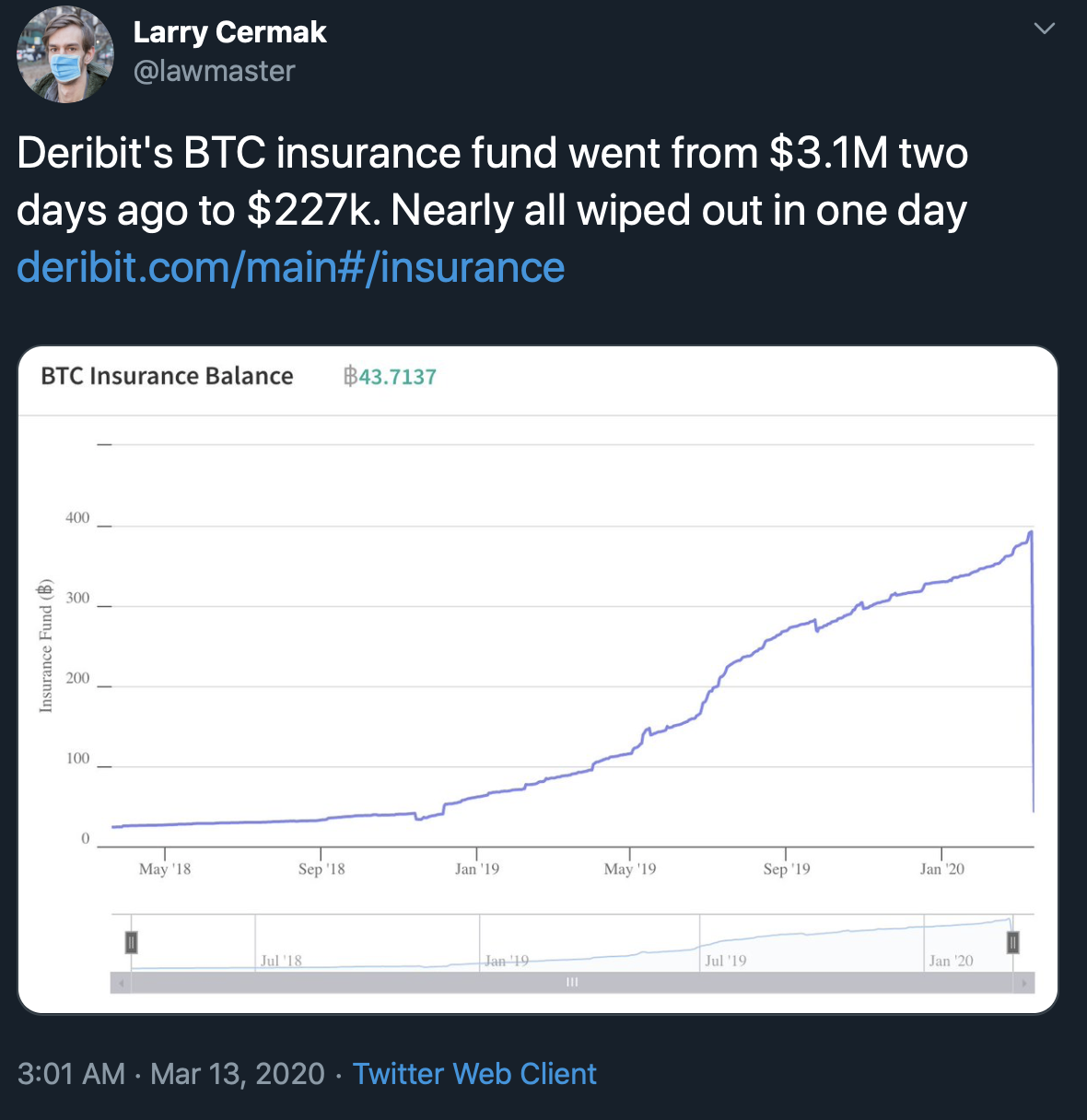 On BitMEX, the platform was taken offline simply to stop the cascade of liquidations. Funding was then adjusted to encourage long positions to stop the carnage.

Only a handful of margin trading platforms were able to sustain the volatility, including Bitfinex, Kraken, and PrimeXBT. But only PrimeXBT offers leverage comparable to Binance, BitMEX, and Deribit at 100x.

This isn’t the first time PrimeXBT was able to sustain during market volatility, which is rare for a trading platform offering leverage.

Spot Exchanges Struggle to Sustain Stability in Price and Trading

Spot exchanges also struggled with liquidity, with Bitcoin price rising and falling by over $1,000 in five to ten minute intervals. The volatility on these platforms was especially substantial.

Interestingly, when BitMEX went down, Coinbase began to trade at a massive price premium. Many say this was simply fiat inflow, while rumors claim that Coinbase was taking advantage over panic-buying at the lowest prices Bitcoin traded at in two years.

Whatever the case, even spot platforms had a hard time surviving the massive Bitcoin bloodbath that hit markets this week.

What to Do The Next Time Extreme Volatility Strikes?

Typically, when volatility strikes, it's spot platforms that are the most stable, and margin platforms tend to falter due to traders using leverage. But because margin trading is by far the most popular tool in the cryptocurrency space, the issue will likely remain and needs to be addressed by these platforms that were affected.

And while even Coinbase has recently added margin, it couldn’t even match Bitfinex’s 3.3x which is low by industry standards. BitMEX, Deribit, and PrimeXBT all offer up to 100x leverage on cryptocurrencies, however, two out of the three platforms couldn’t handle the volatility last night and traders using those two platforms suffered.

During extreme selloffs of such magnitude, exchanges often show their true colors. Those that are prepared for the worst, and regularly stress test their engines will always meet reliability standards and expectations, while the rest will scramble to fix issues as they arise.

It’s a reminder to always be extremely careful when selecting a trading platform, and to even consider trying out a few to ensure that if in the event of an outage at one exchange, your funds and positions won’t be totally inaccessible.

Bitcoin and the crypto market is bound to stay volatile like this until the coronavirus clears up, which could take months to a year. Choose your platform wisely.