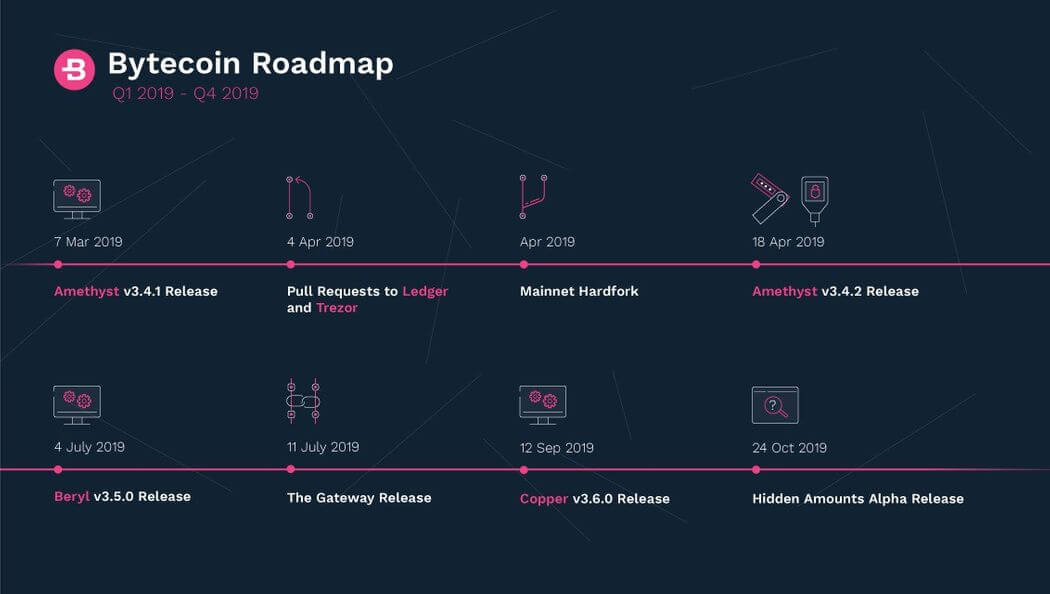 Bytecoin has released a new roadmap detailing the trajectory of releases and platform growth anticipated in the near future. The updated roadmap, coming just after the introduction of the newest platform software update, Amethyst Version 3.4.1, provides a look forward to where one of the oldest cryptocurrencies on the market is headed.

The roadmap kicks off with the release of Amethyst Version 3.4.1, which features a number of important alterations. At the forefront, interaction between platform software and the memory pool will be improved, eliminating lag times, and the computational load for Bytecoin miners will be decreased, resulting in more transactions capable of being mined.

April 4th is a key date on the roadmap as it is when official pull requests will be made to the Ledger and Trezor software repositories. Pull requests are appeals to amend or improve pre-existing code. Bytecoin developers have been working on an amendment that would introduce Bytecoin support to the Trezor and Ledger hardware wallets. Approvals on behalf of Ledger and Trezor would open the doors for official hardware wallet support for the Bytecoin community.

Following the release of Amethyst and the application for hardware wallet support, Bytecoin’s mainnet hard fork is tentatively scheduled to occur. This is a non-contentious hard fork, meaning that it has been pre-planned and will operate as a means of refining the Bytecoin platform rather than dividing it. The blockchain switch height will be scheduled, triggering the hard fork, once 90 percent of the blocks in a 720-block frame are submitted via the new version of Amethyst software.

Moving further along the roadmap, the summer will be punctuated by an update to the Bytecoin desktop app, with a new look and increased functionality, and the projected debut of the Bytecoin Gateway Project. The gateway project is a potential means of expanding the community that has been steadily taking shape over a long period of time. Later in the year, the team is planning on releasing Bytecoin 3.6.0, which will introduce messaging functionality to the platform, and further along in the year will come Hidden Amounts, a means of hiding the amount of funds used in transactions.

Bytecoin CMO Jenny Goldberg had this to add on the unveiling of the new roadmap:

“We are pleased to share what we are working on with the community and the industry at large. We think that the events outlined in the roadmap are developments that will result in positive growth for our platform. As always, we are striving to provide our community with a dynamic and necessary product. To do this it is of utmost importance to continuously evolve, but to do so without abandoning the principles that have been our cynosure from the beginning. This is reflected in the roadmap.”

Bytecoin was originally launched in 2012 as the first privacy-oriented cryptocurrency based on CryptoNote technology. With a market cap of over $100 million, Bytecoin remains one of the most significant cryptocurrencies on the market.

Intro to the 3rd Generation of BTC: Bitcoin Latinum