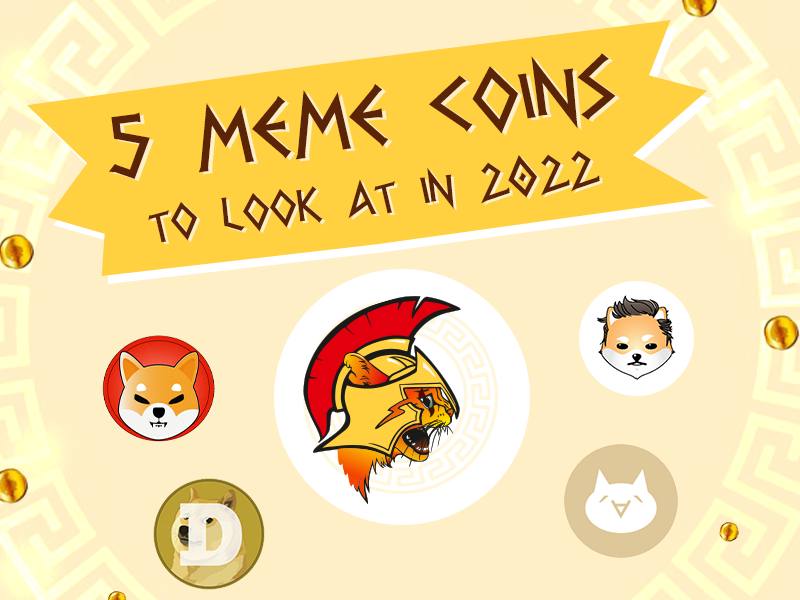 In this article, we take a look at five of the most noteworthy meme coins as of the beginning of H2 2022. Some of them are famous for their past successes and are the first thing that comes to mind when someone thinks about replenishing their crypto portfolio with coins from the meme coin sector.

However, as we shall see, meme coins as they have existed until now have outlived their usefulness, as their price charts tend to go deep down. And now it's time for the new heroes that have already appeared. We will write about them here so that you do not miss the early sales of the meme token, which may change the landscape and balance of power in the field of cryptocurrencies.

How Are Memes Related to Cryptocurrencies?

In our era of clip thinking, memes have become a universal way of conveying opinions and meanings to a wide audience. The visual image, mixed with humor, unites people into a friendly community understanding its aesthetics.

It is quite natural that such a phenomenon as cryptocurrency, which also essentially unites like-minded people into a single specific community, attracts meme creators. Indeed, it attracts them so much that the meme-based crypto has formed a separate subspecies: the class of meme coins.

It's amazing how what started as a joke grew into a full-fledged market. It is unlikely that the creators of Dogecoin assumed that the profit from their coins would help Elon Musk build a spaceship called DOGE-1. Judging by the serial number, the optimist Elon suggests that there will be both the second and the third.

Meme Coins As an Investment Tool

Investors have been appreciating meme coins for several years now as a tool of the market game, which is mostly manipulated in a very primitive way by pumping and dumping. The fate of meme coins is usually more or less the same: first, the coin is advertised through social networks, its value is pumped up obscenely, and then the rate collapses, making profits out of the blue.

This is mainly due to the nature of this type of crypto: the fact is that meme coins essentially have no utility value. There is no significant technology, no product that changes lives for the better behind them. Their nature is to cause laughter and smiles, and their cost is always artificially inflated.

However, things seem to be changing in 2022 as an interesting new participant enters the scene: the SpartaCats platform with its native token PURR. What is its main difference? First, it is a meme token that appeals to an audience of cat fans and memes in general. Secondly, behind it is a full-fledged decentralized autonomous organization (DAO) and its token is a utility token. So, what differentiates SpartaCats from other meme coins is that it is the first meme coin backed by real value.

The Dark Horse of the 2022 Meme Coin Market: SpartaCats (PURR)

The goal set by the SpartaCats project is to create a single ecosystem of the meme coin community and NFT users. The SpartaCats community is built on the principles of DAO, that is, it is completely controlled by its members by voting on important issues. PURR tokens are fully distributed among community members, and the right to vote belongs to NFT holders. In total, 300 unique tokens will be issued over 4 years, that is, the DAO Foundation will be managed by 300 votes, which refers us to the memes from the movie 300 Spartans.

A total of one trillion PURR will be issued. Of the 300 NFTs, 20 will belong to the core team, and 10 will be distributed to key partners and opinion leaders who will support the project. The remaining 270 NFTs will be distributed to the public over 4 years at regular intervals. 1 NFT = 1 vote, so, accordingly, the more NFTs, the more influence in the community.

PURR is not only an asset associated with cat memes but a real utility token. PURR allows users to create clans and communities within the SpartaCats platform, and hold competitions and championships that will form the economic hierarchy of the entire meme coin ecosystem.

An important part of the SpartaCats ecosystem are organizations from the real world that help cats: shelters, communities, and charities. The company is going to financially support and conduct joint activities with them.

Now SpartaCats is actively promoting its platform and looking for ambassadors: by completing simple tasks or inviting friends, early adopters can earn PURR tokens and participate in the first and very valuable cat NFTs.

Dogecoin: To the Moon and Back

Dogecoin is the first meme coin in history and the first thing that comes to mind for those who want to invest in such an asset class. However, don't rush. Let's see what kind of coin it is and how it happened that DOGE is on the 10th line of the CMC today.

The first meme coin started out as a harmless joke and was not meant to be an investment. Until Elon Musk launched DOGE into the stratosphere when he tweeted on April 2, 2019, that Dogecoin could become one of his favorite cryptocurrencies. In three days, the coin has risen in price by 40% and continued to gain value on further tweets of “Dogefather”, as Musk dubbed himself.

What happened is now called the “Musk effect”: as soon as the Tesla CEO writes some note on his blog about some cryptocurrency, positively or negatively, this affects its price. Thus, Musk even managed to cause fluctuations in the rate of the first cryptocurrency, Bitcoin, several times.

The Musk effect also has a downside: for example, on May 9 this year, Musk showed himself not on the most successful side, releasing disparaging jokes about his former lover in an interview with Saturday Night Live. This affected the Dogecoin rate, which immediately collapsed by 29.5%.

It would seem, what does DOGE have to do with it? However, the movement of the price of something that has no intrinsic value has no logic. Manipulation rules here, and therefore it is useless to make forecasts and consider the coin as a full-fledged investment tool. Crypto enthusiasts can unite as much as they like under the slogan “Stop Elon Musk”, but he is far from the only one who engages in this kind of manipulation of the market.

One way or another, the enthusiasm around DOGE is quickly fading: over the past 12 months, the coin has lost more than 80% of its value, and, we think, this is far from the limit.

Shiba Inu: the Parody Coin Quick Start and the Mysterious Disappearance of Its Founder's Posts

The Shiba Inu (SHIB) cryptocurrency appeared in August 2020. It was created by an anonymous user under the pseudonym Ryoshi. The emergence of a new meme coin with the same dog (Dogecoin is presenting the Shiba Inu breed, too) was accompanied by success: positioned as the “Dogecoin killer”, this ERC20 standard token was originally created completely decentralized and promoted exclusively through social networks.

According to SHIB's "Woofpaper", cryptocurrencies that fail to maintain their independence are subject to increased fragility. The Shiba Inu community is named the Shib Army in this document, and the project itself is a kind of huge experiment aimed at finding out whether decentralization can work when the coin has no team, no funding, and no direct leadership.

However, large parabolic lifts tend to be unstable. And it looks like Shiba Inu has exhausted its potential for today: the token is now trading well below its all-time high prices: 0.00008 in October 2022 and 0.000009 now. With a market cap of $5.3 million, it is still the second most valuable meme coin available today. However, since 2022 ATH, Dogecoin and Shiba Inu have shown a massive drop in prices. The graph of their price movement leaves the feeling that meme coins may never return their positions, as they were always the coins for pump and dump only.

The behavior of the Shiba Inu founder, Ryoshi, is also strange. On May 30 of this year, the creator of SHIB disappeared from social networks, deleting all tweets and medium posts dedicated to the token. And although Ryoshi vaguely hinted that someday he would disappear, this move certainly did not help raise the price of Shiba Inu, but on the contrary, collapsed its price even further, which was to be expected. Many believe that the coin, which initially had no intrinsic value, turned out to be a failed experiment for its creator, and what awaits it ahead is that it will slide to zero, and its devoted investors will be left with huge losses.

Launched in 2021, Dogelon Mars is a mix of its inspirations: Dogecoin and Elon Musk. Its market capitalization is over US$147 million. In addition to being a token, its themed comics are also available for sale as non-fungible tokens (NFTs). Dogelon Mars is committed to making cryptocurrencies a level playing field, free from scammers. And to do so, it is undertaking numerous initiatives such as donating tokens and burning the liquidity provider tokens it received from Uniswap.

Despite the altruism, crypto fans are not sure what the ultimate purpose of this token is, given that it has no real utility. Its only advantages at the moment are the use of the name “Elon'' in the style of clickbait and donation to Vitalik Buterin, as the creator of Shiba Inu once did (he sent half of the issued SHIBs to the Ethereum co-founder, which Vitalik burned). It seems that Dogelon Mars is a one-day coin that was released by people without even their own imagination, who borrowed all ideas from other coins.

MonaCoin (MONA): an Interesting Cat Token, But for Japan Only

Launched in 2013, MonaCoin is valued at over $34 million and is based on the Japanese cat character Mona. This feline token would have had a chance of winning the market if it wasn't focused exclusively on the Japanese market.

Using the token, you can mine, tip in P2E games, and buy items from Japanese shops online and offline. MonaCoin has even been approved for daily use by Japanese regulators. It boasts fast transactions and the ability to withdraw cash and make purchases directly from ATMs in Japan. An interesting example to focus on when creating a meme coin.

Speculators who invest in meme coins in the hope of seeing their investment grow are, in fact, betting on the continued popularity of joke coins. Many made fortunes when their meme tokens rose in value. However, those who missed this train and jumped on the bandwagon at the last moment lost fortunes. Many meme coins in recent years have shown a typical picture of a Ponzi scheme: pump, dump, and a coin ends up in the trash.

There is hope that the new fluffy token from SpartaCats will change the status quo. Cats are known to be more popular than dogs, and cat memes are flooding social networks. Therefore, the token that will be backed by the infrastructure behind it in the form of a marketplace and wallet, supported by links to real institutions, and having a decentralized community of meme and NFT fans behind it, is simply doomed to success.

The PURR token from SpartaCats is currently trading on two DEXs: PancakeSwap and FlatQube. And though it made X8 immediately after the sales started, it still can be purchased at a low price. So, hurry before this meme coin goes viral.