in Regulation
by Samantha Dunn

Several popular crypto YouTube channels have had their channels shut down by the video sharing platform.

Following his Tweet on Sunday, in which he shared the news of the ban with his Twitter community, Bankless sent a public message to the CEO of Youtube, Susan Wojcicki, petitioning the reinstatement of his YouTube channel. 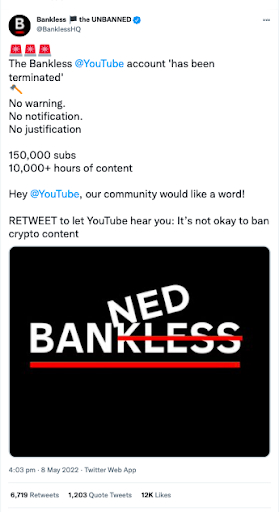 On Monday, the Bankless channel was restored to YouTube, however there were several other accounts from crypto-centred YouTube channels that were banned. Other educational accounts, including the Optimism Collective, and Gabriel Haines, had their accounts shut down.

YouTube’s decision to shut down these channels has not been confirmed, however the social media giant has been known to seemingly randomly shut down and reinstate channels. To individuals of a more sceptical nature, it might appear that YouTube is targeting Web3 and crypto channels, preventing freedom of speech. Stani Kulechov, the founder of Aave commented on the recent shut-downs by Youtube, tweeting:

“​​It seems that @YouTube (@Google) has banned educational web3 accounts on YouTube including @BanklessHQ, @gabrielhaines and @optimismPBC deleting their content and ability to share information with their audiences. We all need to switch to web3 social to keep our freedom of speech”

“Our recommendation, if governments want to have more control over online speech is to pass laws to have that be very cleanly and clearly defined so that we can implement it,” Wojcicki said.