What Are Stablecoins & What Makes Them ‘Stable’?

in stablecoins Crypto
by CryptoDaily 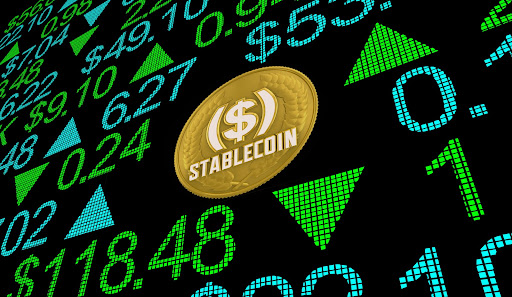 Cryptocurrencies like Bitcoin, Ethereum, and others can be excellent investments for those looking for a big return, but their incredible volatility can also be a drawback at times.

Because the value of Bitcoin and other cryptos fluctuates so wildly, often gaining or losing thousands of dollars in the space of a few hours, it can cause big headaches for investors at the wrong end of a price movement. So much so that they need a way to exit their position quickly, rather than risk maintaining it overnight when anything could happen.

Previously the best thing investors could do was cash out overnight. But transferring crypto to fiat is a time-consuming process that often incurs not insignificant fees. Hence, the world’s first stablecoins were born.

Stablecoins are the crypto-equivalent to fiat currencies like the U.S. dollar, Euro, or Japanese yen. They can be trusted to hold their value over time and also provide a way to easily transfer that value. For example, Bitcoin investors can quickly convert their holdings to a USD stablecoin, then invest that amount elsewhere when they feel the time is right. It can be transferred to a different exchange or wallet with ease, much faster than Bitcoin transactions occur. It can also be withdrawn more easily or spent at certain vendors.

Stablecoins were a big boon for crypto traders when they first emerged in the middle of the 2010s. It provides a way for them to instantly cash out and sleep peacefully without needing to stress over how their position might be affected in the morning. They also give investors a way to hold part of their portfolio in cash, so they’re ready to buy whatever asset they need at a moment’s notice.

The vast majority of stablecoins peg their value to the U.S. dollar, though there are many that peg themselves to alternative fiat currencies such as the Euro, the GBP, the IMF’s SDR, assets such as gold, and even to other cryptocurrencies, such as the unique Wrapped Bitcoin crypto.

That said, there are a number of stablecoins that appear to stand out from the crowd, proving extremely popular with investors. We’ve highlighted a few of them below.

aUSD is the stablecoin of Acala, which is an emerging DeFi hub project on the Polkadot blockchain. It is designed to allow users to transfer value that’s pegged 1:1 with the USD across any parachain within Polkadot’s ecosystem.

The stablecoin is based on the Honzon protocol, which is similar to other protocols in that it requires collateralization before new tokens can be minted.

However, aUSD is notable for being a multi-collateralized token that can be backed by Polkadot’s native DOT token, BTC, ETH, KSM and various other ERC-20 tokens. To mint new aUSD, users must take out a loan from Acala using one or more of those cryptocurrencies as collateral, and they’ll be required to pay interest on the loan. However, unlike other protocols, Honzon uses various mechanisms that ensure stability and manage the risks that arise from the fluctuating value of the underlying assets.

The advantage aUSD has over other stablecoins is it has full access to Polkadot’s ecosystem of parachains, allowing it to transfer value across them in seconds. It can therefore perform many functions easily. For instance, aUSD allows users to earn interest by lending aUSD via several different DeFi protocols within the Polkadot ecosystem. Users can also trade aUSD through various decentralized exchanges, benefiting from higher liquidity thanks to its cross-chain nature. Finally, aUSD is secured by the shared security model of Polkadot

The primary stablecoin of the Terra blockchain, TerraUSD is not backed by any on-chain asset, but rather maintains its 1:1 peg with the USD by using an algorithm that manages its money supply. So, when 1 UST falls lower than 1 USD, the system mints and auctions mining power to buy back and burn UST to reduce the overall supply and increase its value. On the other hand, it can also expand its supply when 1 UST overtakes 1 USD, buying back mining power with UST until the target peg is reached.

TerraUSD is trustworthy as its source code has been successfully audited by third-party security firms. The protocol can also support other stablecoins, so if the community decides to do so it can create TerraEUR, TerraJPY and others. Furthermore, atomic swaps are also supported, meaning those stablecoins can be exchanged at their market exchange rate. That makes Terra stablecoins highly scalable and liquid.

TerraUSD’s anchor protocol allows stablecoin holders to borrow and save, while other users can take out loans in exchange for other cryptocurrencies. It also boasts a mirror protocol for users to issue and swap synthetic assets for real-world assets, without any physical backing.

Terra is working to add cross-chain functionality to TerraUSD so it can work with other blockchains like Ethereum and Binance Chain.

The Abracadabra.money protocol enables users to collateralize digital tokens, including interest-bearing tokens, and mint MIM, a stablecoin that runs on multiple blockchains, including Avalanche, Arbitrum Binance Chain, Ethereum and Fantom.

MIM’s goal is to give users a way to farm yield more efficiently. It relies on a special protocol that allows users to provide collateral using interest-bearing coins, known as ibTKNS. Users can obtain ibTKNS by staking regular tokens to yield farms such as Sushi and Yearn. For doing so, they receive illiquid ibTKNs (like yvUSDC) that are essentially receipts of their deposits. These must be returned back to the yield farm to claim back the original deposit plus interest.

MIM uses ibTKNS because they accumulate interest over time, thus increasing their value slowly but surely as users pay back the interest on the MIM loans they take out. This is different from other stablecoins, which are minted via deposits of liquid assets.

Some examples of ibTKNS include yvYFI, yvUSDC, yvUSDT, xSUSHI and yvWETH, which can be collateralized and then injected into the system in return for newly minted MIM. MIM can then be linked to all of the above blockchains and traded.

In this way, MIM enables DeFi users to transform stranded capital back into liquid assets that can be traded or used in other ways. Previously, interest-bearing tokens had no use cases.

Tether is the best-known stablecoin in the crypto world but despite this, it has fewer use cases and is somewhat less trustworthy than the proven protocols we’ve covered so far.

Tether was created by Tether Holdings Ltd., a Hong Kong-based company. It runs on the Omni protocol, a second layer on Bitcoin’s blockchain, and on other chains such as Ethereum and EOS. Tether Holdings claims that each USDT token issued is backed by fiat deposits in its traditional bank accounts, thereby maintaining its 1:1 peg with the USD. Tether allows its assets to be evaluated once a quarter (four times a year) by an independent auditing firm. It also publishes daily reports on its bank balances, though these are unaudited.

Despite these measures, Tether was previously fined for lying to its customers that it had sufficient fiat holdings to back all USDT it had issued.

Tether’s popularity stems from the fact it had first mover advantage as the first stablecoin in existence. It has also built up a strong ecosystem simply from being the first and is traded on all major cryptocurrency exchanges in the world.

There is one concern regarding Tether that may dissuade some users. USDT is somewhat unique in its ability to be able to blacklist wallet addresses if it believes they are involved in fraudulent activities. While some users may appreciate Tether’s attempt to combat fraudsters and money launderers, they may be less than happy if their own USDT wallet becomes blocked for unsubstantiated reasons. Tether hasn’t publicly explained what kind of activity might lead to a wallet getting blocked, but the very fact it can block specific users goes against the ethos of decentralization that many crypto users favor.

Similar to Tether, USD Coin is fully backed by cash and equivalents and short-duration U.S. Treasuries, according to its parent companies Circle and Coinbase.

USDC, like Tether, is available on multiple blockchains including Ethereum, Solana, Stellar, TRON and Algorand. USDC is also audited on a monthly basis, more consistently than USDT. Moreover, its code is completely open-source and available to all.

Notably, USDC’s backing from two of the biggest crypto/payments companies in the U.S. gives it a lot of credibility, and use cases and has, in turn, helped to accelerate adoption. For instance, USDC is already available on more than 50 crypto exchanges, including most of the biggest ones. That being said, some users may be concerned that, like Tether, USD Coin also reserves the ability to blacklist wallets that it deems to be involved in fraud or money laundering.

Whereas collateralized stablecoins simply maintain deposits equal to the amount of tokens minted, algorithmic stablecoins use mathematical algorithms to maintain their peg. Typically, this is done through automated monetary policies that are used to manage coin supply, in order to alter the value of the token to match its pegged asset.

Frax’s unique fractional-algorithmic model is built on two assets - the FRAX stablecoin, which is pegged to the USD at a 1:1 ratio, and Frax Shares (FXS), a governance and utility token.

While FXS is used for governance, voting, and staking, its main purpose is to enable minting of FRAX stablecoins.

The minting and redeeming mechanisms are the keys to FRAX maintaining its stable USD peg. Any user who supplies FXS tokens can mint FRAX, receiving a number of tokens according to whatever the Frax collateral ratio is at that time. So, if the ratio is at 50%, they can mint 1 FRAX by supplying $0.50 worth of FXS tokens. The mechanism applies the same in reverse if a user wants to redeem their FRAX for USDC or the FXS they initially supplied.

What’s key is that when new FRAX are minted, the FXS tokens are burned proportionally to the uncollateralized amount. So, by minting FRAX, the circulating supply of FXS is reduced.

However, there is a constant flow of FXS being minted by numerous liquidity providers in the Frax ecosystem, so the supply is actually growing continuously to exert downward price pressure. This explains why the Frax collateral ratio is constantly adjusted. Though the theory is that as adoption increases, more FRAX tokens will be minted, meaning that more FXS will be burned and removed from circulation. So if the circulating supply of FRAX increases as expected, the balanced supply and demand should create a more resilient tokenomics model that ensures price stability for FRAX.