in Revuto Crypto Cardano
by CryptoDaily 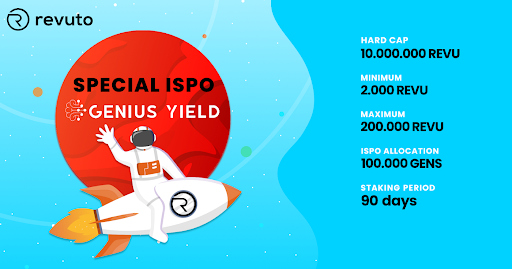 The blockchain-based subscription management and DeFi app Revuto has announced an array of exciting new staking opportunities for $REVU token holders on Cardano.

Users will be able to stake their $REVU in no less than eight exclusive staking pools available in the Revuto Staking Center. The pools, some of which are available now, provide both a competitive yield and the opportunity to earn unique rewards in other native Cardano tokens, Revuto said.

Revuto is expecting to see big demand for the opportunity. Launched in February, its first two staking pools allowed $REVU holders to stake in the VyFinance and SundaeSwap pools to earn $VYFI and $SUNDAE tokens. The pools saw such huge demand that the hard cap on both was reached within just a couple of days of their launch, well before the subscription period expired. As a result more than 24 million $REVU tokens - close to 50% of the circulating supply - have already been locked up.

In addition to the staking pools, Revuto said that as a result of its partnership with Genius Yield that was announced last month, it’s offering $REVU holders the chance to participate in a unique Initial Staking Pool Offering to earn $GENS tokens. Stakers will be able to earn rewards as part of the initial distribution of $GENS at the end of the 90-day staking period, far earlier than the 6-12 month waiting period for those who stake $ADA. What’s more, those rewards will be boosted significantly, with Revuto promising much higher returns compared to regular Genius Yield ISPO rewards.

Did you know $GENS ISPO rewards in the #Revuto Staking Center are almost 3X boosted in comparison with regular #ISPO rewards?!🚀

Learn more how to participate in Special ISPOs under the most competitive terms in the #Cardano ecosystem by staking $REVU.👇https://t.co/VFynH7irXX pic.twitter.com/Qlp5s5c3Sx

Revuto said the remaining staking pools will become available before the end of April, though it hasn’t said which new tokens it will be supporting.

Revuto co-founder and CEO Vedran Vukman said that Revuto is once again making history with its staking pools, after launching the first public ICO on Cardano and publishing the first native Cardano wallet and listing on multiple tier one CEXs.

“With Revuto Staking Pools we are now the first available staking pools to offer staking and rewards in Cardano Native Tokens,” Vukman said. “This is a huge milestone for the entire Cardano community of builders and supporters. To ensure our users and investors enjoy the most competitive returns, we selected the best and most promising projects along with exclusive deals.

Revuto fans may soon gain further opportunities to stake tokens thanks to the company’s recent partnership with COTI. Users can now purchase $DJED stablecoins using fiat from within the Revuto app, and the two companies said they’re also looking into the possibility of enabling staking with $DJED through the app.