in Crypto
by Crypto Daily 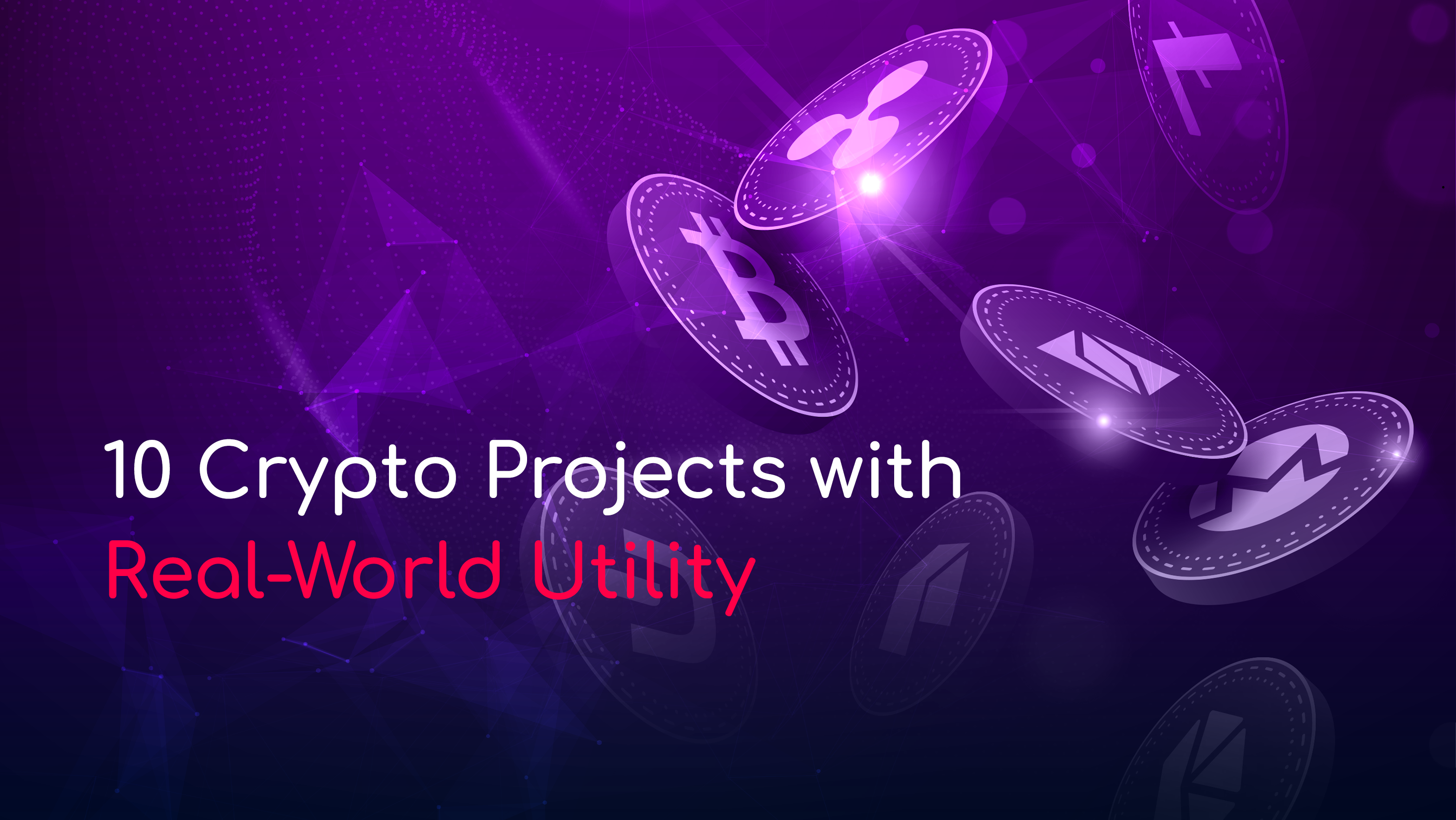 A report from Investopedia estimates that more than half of the cryptocurrencies on the market today have no utility—meaning no product or service behind the token to create value beyond speculation. Similar to what the internet experienced in its own nascency, blockchain’s virtually endless use-cases have created an investment ecosystem ripe for oversaturation.

Of the top 100 cryptocurrencies by market capitalization, just 36 offered a product or service that was market-ready according to the Investopedia study. With hundreds of new cryptocurrency tokens, Non-Fungible Tokens (NFTs) and Decentralized Autonomous Organizations (DAOs) popping up regularly, differentiating the real players from the hype is becoming increasingly difficult.

Why is real-world utility important?

Just like the early stages of the internet, the projects that worked to bring valuable, real change to the world outlasted the projects that were looking to make some quick cash off of the media buzz. Companies like Amazon, eBay and Microsoft brought groundbreaking change to the world with a product that used the technology behind the internet as a foundation for something bigger. Thousands of websites went away after the dotcom bubble burst in 2001, but several have continued to grow and to this day are among the largest companies in history.

Today a similar phenomenon is happening with blockchain. Projects working to bring forth a real product are likely to outlast those that rely purely on market speculation. From real-world services like supply chain management, telecom and advertising to digital products and services such as NFT marketplaces, metaverse games and scaling solutions for blockchain networks—utility will once again prove to outlast speculative investing. Here are ten projects in blockchain and Web3 that already offer utility:

For consumers, VeChain also offers retail solutions to help purchasers track the authenticity of a product instantaneously. This service uses RFID and blockchain technology to allow the manufacturers of high value retail products such as luxury handbags and designer goods to provide a transparent authentication solution. This solution will allow retailers and secondhand retailers to authenticate products using blockchain, preventing the sale of fraudulent items in the retail market.

3air is working to do what many before have tried and failed at—connect Africa to high-speed and widely available broadband internet. The company uses a technology called K3 Last Mile to deliver high speed internet and telephony through the air. Stations deployed throughout the continent will provide a 50 kilometer connectivity radius, as well as providing access to 150 television stations and IP telephony.

The other part of the 3air project aims to provide decentralized and affordable banking and DeFi access to users across Africa. The goal is to bring Africa into the forefront of the digital economy through 3air’s blockchain-based platform that offers multiple revenue streams, decentralized identity management, NFT ownership and more. 3air’s DeFi banking solutions will allow people throughout Africa to easily access goods, services and opportunities within a new digital landscape.

Polkadot is a layer–0 blockchain scaling solution and interoperability platform that allows blockchain networks to easily interact with one another without altering their functionality at the Layer-1 level. Polkadot uses a mechanism called parachains to run parallel blockchain networks next to Layer-1 networks like Ethereum and Solana. Those parachain networks then communicate with another network called the Relay chain, which can then distribute information to other parachains back and forth.

Other interoperability solutions are built on top of different Layer-1 networks and may require additional development from dApp developers in order to be able to operate. Polkadot allows for seamless integration with other blockhain networks, and offers additional services to developers looking to deploy test projects without paying high transaction fees on various Layer-1’s.

Axie Infinity is an Ethereum-based gaming platform that uses NFTs as gaming characters in a play-to-earn game. Players can mint and collect NFTs which represent animal characters in the game called Axies, which can be used to play games, battle other players, or bred and sold as NFTs at a profit. In the game, players earn the platform’s native ERC-20 token called AXS, which can then be swapped for other cryptocurrencies or even fiat currency.

When the Bored Ape Yacht Club NFT project skyrocketed in value over the summer of 2021, most people questioned the validity of NFT valuations. With several NFTs in the collection selling for millions of dollars, this ultra exclusive club was sitting on a lot of money and little to show for it. Since then, though, the Bored Ape Yacht Club has launched events (in the real world and in the digital one), built a highly connected network of owners, launched a token, and announced plans to expand into the metaverse.

While shelling out more than a million dollars’ worth of Ethereum to purchase a picture of a cartoon monkey smoking a cigarette may not seem worth it to most people, there is no question to whether the Bored Ape Yacht Club has managed to provide utility since its launch. With a dedicated and extremely high profile community of celebrity owners, access to highly sought after events in the real world, and some good old fashioned internet clout, Bored Ape may have more utility than most NFT projects on the market today.

The music industry has been trying to integrate with blockchain for years already. After many major record labels underestimated the power that the internet would have over record sales in the early 2000s, the industry is eager to get ahead of the curve when it comes to NFTs and blockchain music streaming services. Audius is, so far, one of the more promising platforms to enter the space.

Audius offers a variety of music-integrated services via blockchain. Users can support artists by funding their projects, purchasing their music as NFTs, or stream their music through a blockchain streaming service. Fans can also purchase concert tickets as NFTs, which are often capped at a resale price to prevent scalping and inflated resale prices on sold out events. Plus, with the easy authentication of an NFT, fake ticket scams are rendered virtually impossible.

ChainLink is an enterprise-level oracle network designed to help organizations using blockchain to interact with the greater internet. For businesses and corporations, ChainLink enables transactions off of the Ethereum network to be stored as smart contracts. In other words, businesses will need the ChainLink oracle network in order to fully integrate with blockchain technology.

While this project may not have its own native token, it does demonstrate use-case for NFTs long-term. A new Coachella Collectibles NFT collection of just 10 NFTs will offer exclusive VIP entrance for life to the Coachella Valley Music + Arts Festival. Holders of the NFT can enjoy access to one of the biggest music festivals in the world, and get additional rewards over time with exclusive merchandise, content and access to special events.

Helium is a cryptocurrency token that provides user rewards for users who participate in what it calls “The People’s Network.” Helium’s take on wireless connectivity aims to provide wireless hotspots using cryptocurrency incentives for miners to share their data with an affordable, public network.

Verasity is a cryptocurrency wallet designed to integrate easily with the greater esports community, with other services in AdTech aimed at helping streamline digital advertising in ways that have never been done before. Blockchain technology provides a level of transparency never seen before on the internet, and Verasity’s VeraVeiws solution combats a phenomenon called ad fraud,  which costs companies billions of dollars annually.

The several use cases for blockchain demonstrated here represent only a small portion of the ways that the technology will revolutionize connectivity as we know it. Opportunities for much-needed change in virtually every industry are enabled with blockchain, and the quickly developing Web3 industry is making real-world utility more and more prevalent among popular cryptocurrency projects. Despite the dozens of popular meme coin projects still making headlines today, though, an increasing number of utility-based projects are likely to outlast the media buzz and bring about real impact.