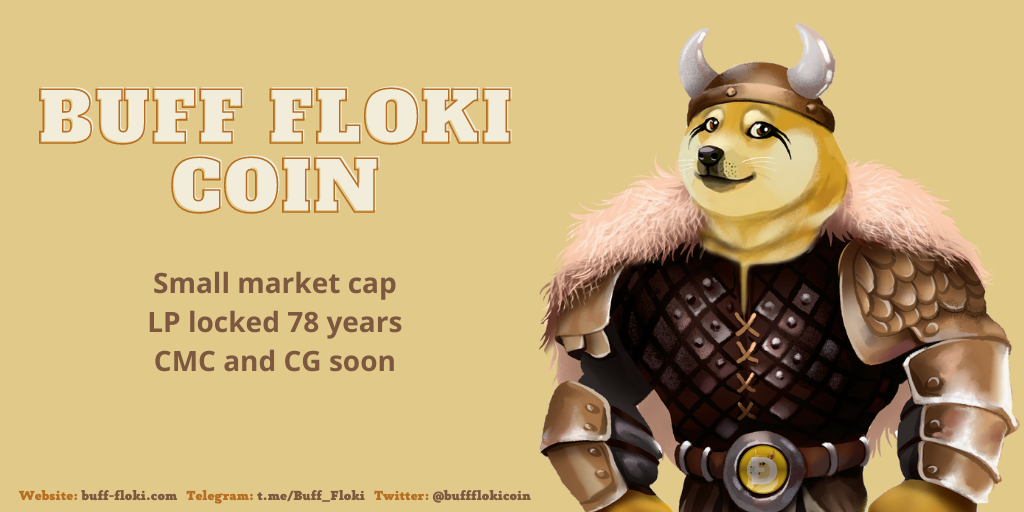 After Elon Musk delivered on his promise and got a Shiba Inu puppy named Floki, an unknown crypto developer issued a cryptocurrency named after him. Floki Inu launches Buff Floki Coin aiming for consistent growth in the coming months. The growth of the coin is also sustained by Elon Musk's social media activity.

Buff Floki Coin opted to forego the enormous taxes and instead focus on rewards of 2% in Buff Floki for holders and lower transaction slippage because reflection tokens are on the increase in the BSC area with huge taxes and not much success.

What is Buff Floki Coin's desire?

Buff Floki Coin wants to impress by proving its new increased transaction speeds and cuteness. It is hyper-deflationary, with a static reflection that rewards holders, so each transaction adds more Buff Floki Coins to your wallet since 2% of every sale are immediately redistributed to Buff Floki owners.

The short story behind

Buff Floki Coin is a meme coin inspired by Tesla and SpaceX CEO Elon Musk's Shiba Inu. An unidentified person known only as Ryoshi developed the coin in August 2020.

Elon Musk has been seen putting his weight behind the project since March 2021. 'I am buying a Shiba Inu,' he tweeted in March 2021. 'My Shiba Inu will be named Floki,' he later tweeted in June 2021. All these tweets have massively influenced the growth of the coin, which continues to rise.

Meme coins are highly volatile cryptocurrencies, even though there does not appear to be a compelling cause for this incredible rise. The existence of a robust community behind meme coins is one of the reasons for their spread. Another factor is those strong personality cults back these coins. Elon Musk, for example, has thrown his support behind Floki Inu in the series of tweets mentioned above.

Another advantage is that the low entry threshold encourages retail investors to rush to meme coins, driving up their price.

Moreover, quality, distribution, and production are all to be taken into consideration. In the case of Buff Floki Coin, token holders get 2% of each transaction reallocated to them.

That means keeping the Buff Floki Coins in your wallet will earn you more. A steady 4% of tokens are burned with each transaction. In addition, the team will manually burn tokens regularly, with each burn being twice as large as the preceding one.

Pinksale has had an LP locked for 78 years, and it's completely safe and secure. The 4 percent commission charge is applied to the blocked liquidity pool indefinitely. As a result, the token's value continues to rise.