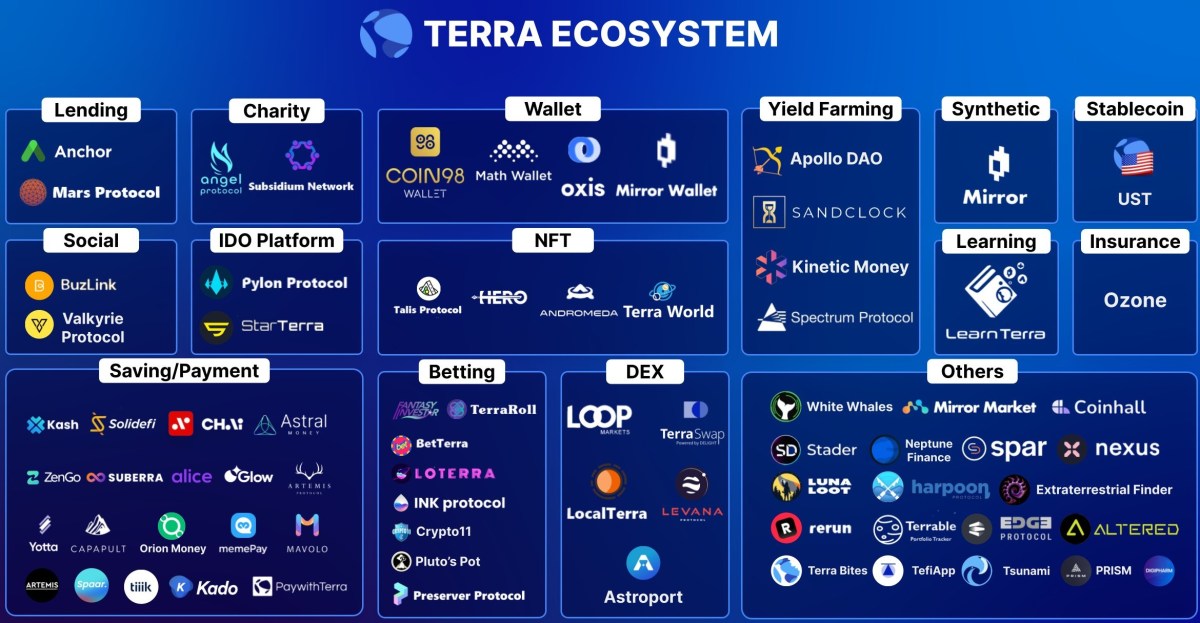 Hey everyone this is KashRon here from the Intellabridge team, in exclusive partnership with CryptoDaily™. This week’s episode of Terra Weekly. First, let’s look at the price of Luna, which is up around 3% this week to around the $43 mark today. In the crypto world, that’s a pretty stable week. Luna’s up by around 11% over the past month making for a pretty strong period of time for the protocol.

Over here, you’ll see there has been $39,000 in tax rewards collected this week, which is down a little bit as the broader crypto market has had a tough few weeks with Bitcoin retreating from its $66k high to $61k, and with the NFT frenzy coming from Luna’s columbus 5 upgrade calming down. Monitoring weekly transactions is important as when transactions occur on the Terra network, there are transaction fees that flow into the Luna token, giving it steady cash flow and intrinsic value. A huge innovation of the Terra ecosystem. The staking ratio is around 35%, this shouldn’t change much week to week but it’s good to keep periodic notes.

Next you’ll see Anchor’s deposit and borrow ratio here. What’s interesting is that this week, for the first time ever the borrow rate actually became negative. This is notable as the net interest rate is a reflection on how healthy the system is. The more stress on borrowing behavior, the more the Anchor protocol needs to give rewards to incentivize borrowing behavior. So seeing a net positive interest rate is a good thing for Anchor as it means the system is healthy.

One great thing about this news is that it brings a lot of visibility to the Terra ecosystem from the mainstream crypto audience. As you can see from Doge and Shiba, visibility and community matter a lot at such an early stage of the crypto industry.

Next up, news also broke this week that Pylon Protocol would be partnering with Prism. Pylon Protocol was developed by members at Terraform Labs as a way to enable SaaS payments for anything from Netflix subscriptions to possibly loan payments in the future. This partnership makes Prism one of the first major companies to use Pylon Protocol’s capabilities. PRISM splits any yield-generating crypto token into two different components, a yield token (YT) and a principal token (PT). This enables several interesting decentralized finance activities. You see these mechanisms commonly all over Ethereum, but bringing it into Terra shows that the ecosystem is maturing.

Next up is the featured Do Kwon tweet of the week. This week I chose one of him talking about hosting an impromptu call on Pylon Protocol, which he actually did have on Twitter Spaces. It’s no secret that the Pylon Protocol has had its share of struggles and difficulty in growing itself. There was one medium post this week with over 300 likes summarizing the outcome of the Twitter spaces conversation including:

Next up, this is actually news from my company, Intellabridge, in full disclaimer. Our product, Kash is a fiat onramp that lets you transfer money from your bank (or stablecoins) to the Kash platform using gmail login instead of Metamask and a debit card to spend your crypto on directly, and a 10% earnings rate on stablecoins that are sitting on the Kash platform. We partnered with LunaBulls and TerraCards to run the first ever utility NFT auction. If you owned a special edition LunaBull or Terra Card you receive lifetime Diamond benefits on the Kash platform, which includes a dedicated customer support person’s cell phone number, extra security features, and an increased interest rate on stablecoins to 16%. These items sold for over 2150 Luna combined, around $100,000, with much of the proceeds going to charity via the Angel Protocol.

Next up, Coinbase announced that they have made more UST pairs with USD, EUR, and USDT. This is significant because trading pairs add utility to a stablecoin. You can exchange UST for actual dollars to spend at the grocery store, or for other major cryptocurrencies like AAVE without having to switch UST to Ethereum to AAVE. People question why Tether is so widely used today despite its questionable auditing history, but that’s because it was one of the earliest stablecoins and simply became a trading pair for all the new cryptocurrencies. It grew out of convenience and utility, and UST will need that same utility to grow.

Next up, in a similar story, Okcoin lists native Luna to its platform! This is once again another sign of adoption and maturity. The more exchanges Luna and UST are listed on, the more people learn and have access to Luna.  And as you can see, this was one of the most upvoted posts on Reddit this week, so clearly very popular with the Luna community.

That’s it for this week, thanks for watching and make sure to like and share this video with others. Have a wonderful rest of your day now.