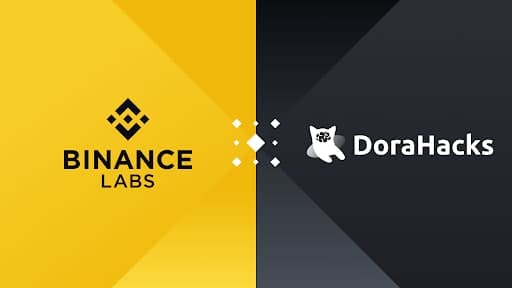 DoraHacks and Binance Labs will reportedly be co-organizing Season 3 of the Binance Labs Incubation Program, according to a recent announcement.

DoraHacks, which is described as a decentralized and international developer community and open-source incentive program, has received $8 million in funding, as part of a strategic investment from Binance Labs, the VC unit and innovation incubator of digital asset firm Binance.

DoraHacks serves as an international hackathon organizer and claims to be the most active Web3 developer communities in the world. According to a release, DoraHacks offers Web3 native on-chain toolkits to assist software architects with raising capital for their projects. In 2021 alone, over 1,000 projects in the DoraHacks community have obtained more than $12 million in grants and donations from various backers.

Bill Chin, Head of Binance Labs Fund, noted that backing early-stage ventures and developers has been a key strategy for Binance Labs. Chin added that DoraHacks is among the biggest multi-chain developer communities with innovative Web3 initiatives quickly emerging. Chin also mentioned that Binance Labs will establish more crypto communities with DoraHacks as part of the investment deal and form a more open-source and extensive blockchain ecosystem. As one of the projects, Binance Labs and DoraHacks are helping to co-organize Season 3 of Binance Labs Incubation Program, Chin confirmed.

To support their ambitious vision for the ongoing growth of the Web3 developer community, DoraHacks and Binance Labs will be working on the these areas:

As explained in the release, software programmers are able to create and support decentralized governance DApps for open source communities and various decentralized autonomous organizations (DAOs) upon the infrastructure offered by DoraHacks and Dora Factory. More than 20 Web3 ecosystems - which notably includes BSC, Polygon, Filecoin, Solana, and many others - are currently leveraging Dora's infrastructure to enable quadratic governance of their developer communities. DoraHacks reports 100,000 monthly active users from 152 nations.

Eric Zhang, Founder of DoraHacks, reveals that since 2018, DoraHacks has teamed up with Binance on 15 international hackathons and grant rounds. Via DoraHacks’ developer events and grant toolkits, Binance has provided more than $2 million in funding to 100+ teams, Zhang added. He also noted that this latest investment should help them with accelerating the innovation of developer incentive mechanisms, while providing more effective products to support hackathon organizers and Web3 open source applications, and also support Dora Factory’s infrastructure and ecosystem development.

Nicole Zhang, Investment Director of Binance Labs Fund, noted that Binance Labs has been a consistent advocate for the open-source movement. Zhang added that DoraHacks has created advanced infrastructures in order to support decentralized voting, funding, and participation for early-stage projects. Zhang further noted that they think that DoraHacks’ vast blockchain developer community should offer steady support to the Binance Labs investment portfolio as well as their larger ecosystem

As mentioned in the announcement, DoraHacks is an international hackathon organizer and one of the most active Web3 developer communities worldwide. DoraHacks offers Web3 native on-chain toolkits to assist developers with securing funds for their initiatives. DoraHacks core features consist of Quadratic Funding Grant, Bounty, Hackathon, BUIDL NFT, and Continuous Funding.

This year, more than 1,000 projects in the DoraHacks community acquired over $12 million in grants and donations from different supporters.

Dora Factory is the DAO-as-a-Service infrastructure in the Dora ecosystem, which reportedly includes core governance DApps as well as Middleware including Grant Factory, Privacy Voting Infrastructure, and DoraID for DAOs and open-source communities.