When ElonMusk said DogeCoin was “pretty cool” in 2019, the coin began its momentous rise which would see it face a number of critics, but equally gain a huge network of supporters and their very own “Doge Army”.

Another alt coin that has had a similar rise, despite the number of detractors, is SafeMoon. The DeFi coin is one of the fastest growing cryptocurrencies, with a slogan of “safely to the moon” and claims to be a people focused token that rewards its holders. SafeMoon has risen from relative obscurity in a record amount of time. According to the SafeMoon website, more than a million people hold the SafeMoon token, and given the amount of media hype surrounding this token, the support for the token is reminiscent of DogeCoin’s.

While the volatility of the cryptocurrency market may see coins and tokens rise and fall on a daily basis, both DogeCoin and SafeMoon stick out from their various competitors, due to the strong community support they currently hold. In recent years, strong support has held up a number of cryptocurrencies and digital assets that have been viewed as the ‘underdog’. DogeCoin being a case in point, as well as the parallel case of Gamestop in the stock market.

Both alt coins have faced their fair share of criticism, with the Shiba inu- themed DogeCoin that was created in 2014 even branded by its creator as a cryptocurrency “for sillies”. The coin's most famous fan, Elon Musk, has admitted his fascination with the coin is somewhat of a joke. Despite the laughable beginnings of the shiba-inu influenced coin, nothing changes the hard facts that it has risen a staggering 10,000% since April of 2020.

The explosion of DeFi has seen a number of tokens emerge, with important exchange listing announcements allowing a number of these to grow.  SafeMoon is not relying on exchanges to provide them with a platform, despite being listed on several exchanges, and has recently launched a fundraiser for their own platform. That being said, SafeMoon posted a tongue in cheek comment on Twitter directed at the Binance exchange. 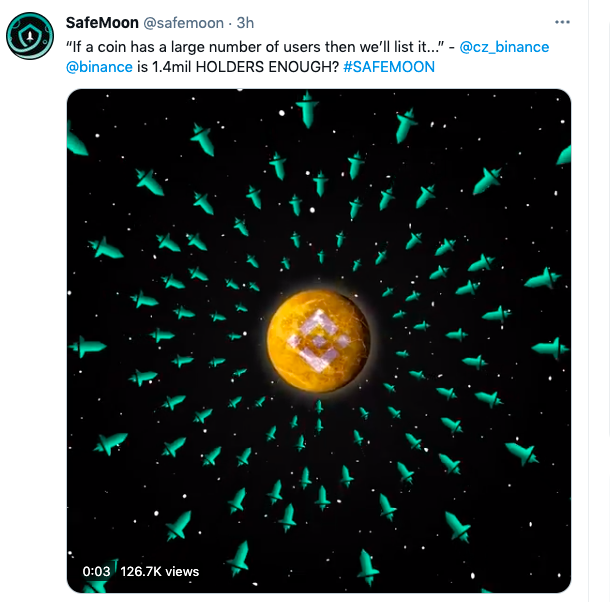 Whether or not these coins continue to rise and defeat the odds, is questionable. While strong community support may sustain them temporarily, as with other cryptocurrencies and digital assets, regulation and mainstream industry support is crucial in sustaining them long-term, and getting them, safely, to the moon.

Bitcoin will not be outlawed