Exchanges news: traffic growth and a deal with LocalTrade 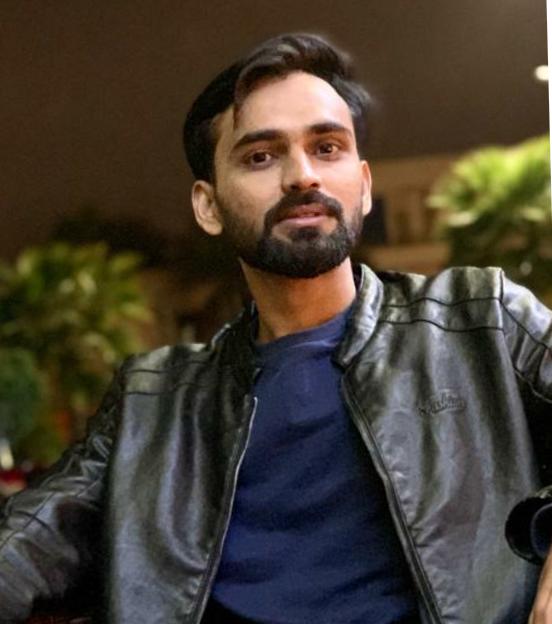 According to the statistics of the analytical agency ICO Analytics, in July 2020, the traffic of cryptocurrency exchanges increased significantly. Experts attribute this primarily to the rise in the price of bitcoin and altcoins, as well as the entry of new money into the market.

Traders return to the cryptocurrency market

In figures, the traffic of centralized exchanges grew by 26%, and the growth of traffic to all cryptocurrency trading platforms was about 26%. The statistics are based on the analysis of hundreds of popular sites, international and operating in one jurisdiction. 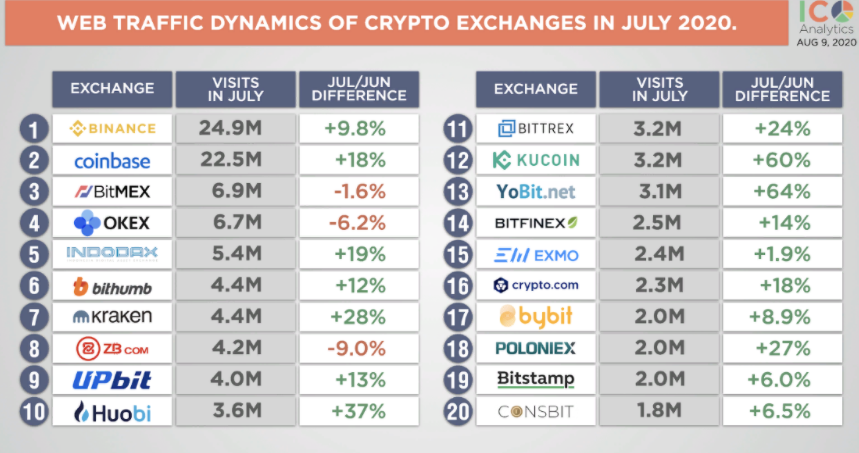 First of all, such a demand for exchanges is explained by the growth of the entire cryptocurrency market over the past weeks. Bitcoin surpassed its annual maximum, and Ethereum reached such a price for the last time only in the summer of 2018.

Of course, a growing market always attracts new investors and traders who bring capital to the industry, and also begin to use thematic resources, including exchanges, more often.

Of course, this dependence works in the opposite direction. In the spring of this year, during the crisis in all financial markets, which did not bypass digital assets, interest in exchanges decreased significantly.

If in March 2020 cryptocurrency trading platforms were visited over 111 million times, then in April this figure decreased by 11.1 million visits. 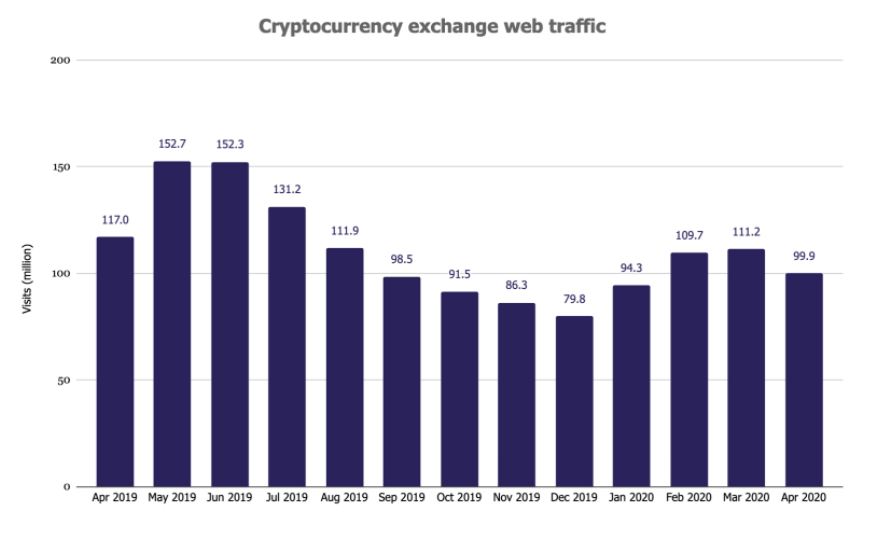 It should be noted that a fall in price does not always reduce interest, and growth - increases. Traders, first of all, need volatility and active trading. March 2020 was a record month for website traffic since September 2020, although it was in March that all quotes and asset prices collapsed.

Preparation for the sale of the LocalTrade exchange

Confirmation of interest in exchanges is evidenced by the fact that large players are showing great interest in launching new and buying existing platforms.

Earlier there was information about the upcoming purchase of the LocalTrade cryptocurrency exchange, the rights to which belong to localtrade.pro LLP. As expected, the trading platform will pass to the founder and ex-owner of the Coinsbit exchange, Mykola Udianskyi.

LocalTrade, an exchange for trading digital assets, has been operating for almost 4 years, starting in 2016 and participating in the Coinmarketcap rating with an indicator of $ 82,842,693 USD daily trading volume. During the operating period, 21 cryptocurrencies and 46 trading pairs were added to the site. However, almost all of the trading volume is made up of ETH/USDT, BTC/USDT and ETH/BTC, and the rest of the transactions are made only in the remaining 18 markets. Local Trade platform is available in 4 languages, including English, Spanish, Chinese and Russian.

Info about the new owner

Mykola Udianskyi, who is going to buy the exchange, has previously worked in this area. He is the founder of Coinsbit and managed it from the launch of the exchange in 2018 until November 2019, when he sold his share to an unknown owner, explaining this by a temporary departure to other areas of business due to the non-transparent policy of regulators.

Coinsbit was registered in the jurisdiction of Estonia. According to the developers, the site supported up to 10 thousand transactions per second and over 1 million TCP connections. In addition, Coinsbit is integrated into 200 thousand POS terminals in South Korea, Vietnam, China and India, and supports OTC trading, has its own marketplace and platform for attracting investments by crypto startups. In the Coinmarketcap rating, the exchange is in 14th place with a trading volume of $172,253,098 per day.

According to insider information from Udianskyi's team members, LocalTrade will receive a major technical update. They plan to add margin trading, futures, stop-loss orders and OTC trading to the platform to keep the exchange in line with the competitors.

In addition, LocalTrade will receive official legal status and a license to conduct related activities in the SEC of Montenegro. Accordingly, after the signing of all the papers, the trading platform will be focused on the European region, and in particular on the Balkan countries. Official activities will begin in the spring of 2021, and the company's office will be located in the capital of Montenegro, Podgorica.