Skrill is a UK-registered and regulated online payments company offering a multitude of services to its users. Over recent years, the company has been on an aggressive program of expansion, both in terms of its range of offerings and geographies.

This guide will provide a comprehensive overview of Skrill, covering the company history, expansion activities, and the offerings available to users of the Skrill platform.

Skrill has a long history in the online payments industry, starting life in 2001 under the name Moneybookers. It has been offering over 100 payment options in 41 different currencies, and has managed to establish itself a reputation as the leading competitor to PayPal. About ten years after its launch it was rebranded to Skrill.

Over subsequent years, the company was involved in several mergers both as the acquirer and the acquired. Now, Skrill is part of the Paysafe Group, which also operates Neteller.

Skrill’s CEO is Lorenzo Pellegrino, who also heads up Neteller and Income Access. In the time that Pellegrino has been leading Skrill, the challenger bank scene has erupted in the UK and Europe, expanding with a CAGR of 38.3%. Firms, including Revolut, Monzo, and N26, have emerged as potential rivals to Skrill. In response, the company has worked hard to ensure it remains competitive.

In 2018, Skrill launched its cryptocurrency buy and sell service, enabling users to swap their fiat account balances for Bitcoin and a range of other cryptocurrencies. Last year, the company extended this offering to a crypto-to-crypto exchange capability.

It also started offering a loyalty program last year, called Skrill Knect. In May 2020, the company announced a four-year brand partnership with AC Milan, becoming the preferred payment partner for the club's merchandise sales. Most recently, Skrill launched its zero-fee international money transfer service to customers in the United States.

The Skrill user interface is intuitive and friendly, with the various services listed on the left-hand menu. Once they’ve opened an account, to start using Skrill, users have to make a deposit. The different deposit options are listed below. 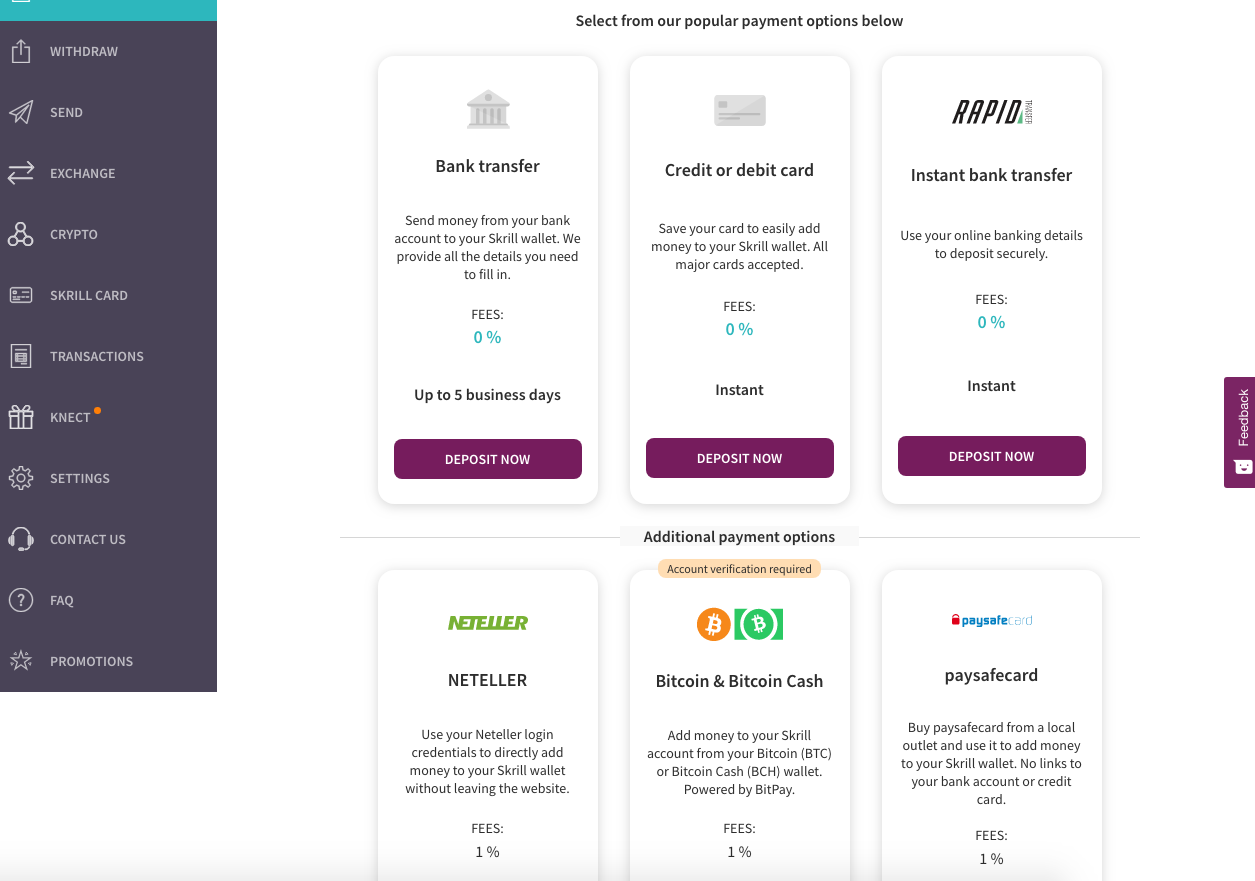 Funds can be withdrawn to the user's bank account or credit card. Fees are charged at a flat rate for bank withdrawals, or 7.5% for withdrawal to a Visa card.

The “Send” feature allows users to send fiat or cryptocurrencies instantly to other Skrill users. This service is generally free, although some conditions apply. The Money Transfer service also enables users to send funds from their debit or credit card to a bank account or mobile wallet. Over 40 currencies are supported.

Some of the challenger banks and online payment firms, such as Monzo, have attempted to distance themselves from cryptocurrency. However, Skrill has spotted a gap in the market. It opened up an initial service offering buy-and-sell for cryptocurrencies back in 2018. Last year, the company extended its reach in the growing industry and has launched a crypto-to-crypto service, enabling trading between different digital assets. The range of supported assets has also been expanding to include altcoins such as Tezos and Kyber Network token. 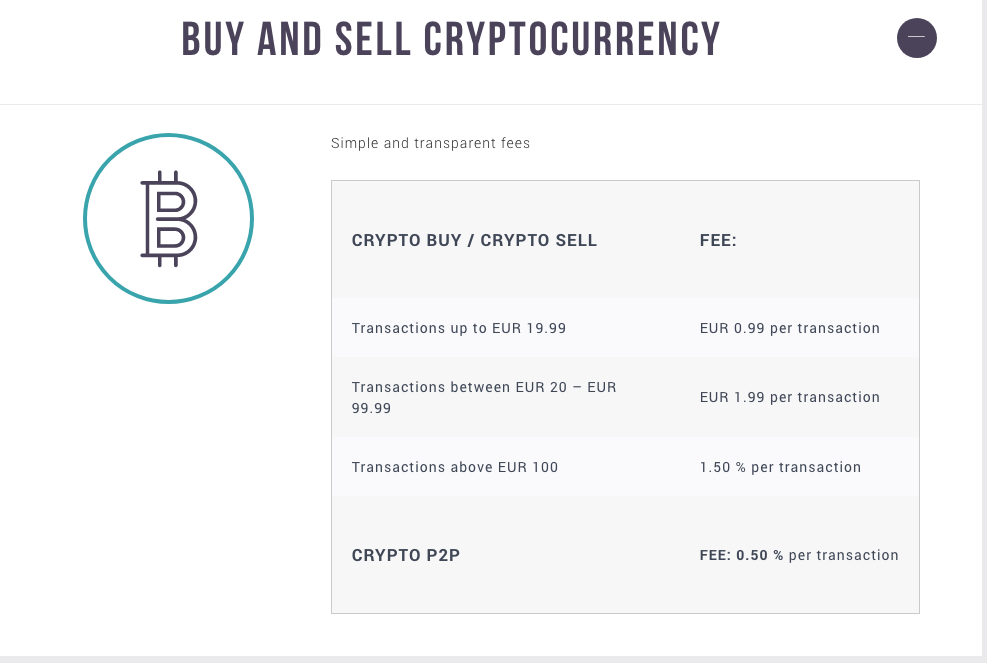 However, Skrill isn’t necessarily attempting to secure itself a market within the crypto trading space. Instead, it’s providing a convenient and user-friendly onboarding experience to cryptocurrency newcomers. Even despite the strides that the crypto sector has made in recent years, onboarding for newcomers is still a challenge. Those entering the cryptocurrency space generally have to navigate all the complexity of exchanges and wallets. Given how crowded this market has become, it can be daunting for a newcomer to understand the various options, or reputation, of any given provider.

Part of the appeal of using Skrill is that anyone can easily buy their first cryptocurrencies using the same interface as the fiat services, which is far more intuitive and less intimidating than a cryptocurrency exchange. Crypto exchanges tend to target traders and emulate the interfaces of stock exchanges, which is bound to be off-putting to anyone unfamiliar with that world.

However, users do have access to some basic, user-friendly trading tools such as limit and recurring orders. Price alerts are also available.

Furthermore, Skrill provides a custodial service to its users, meaning they can leave their crypto funds on their account without the fear of getting hacked or navigating the barriers of using an external digital wallet.

At a time when the global economy is entering one of its most challenging phases in the last two decades, many are predicting that a digital economy is the future. Therefore, in offering an easy onboarding to cryptocurrencies for newcomers, and a bridge to fiat currencies, Skrill is positioning itself ahead of the game. Moreover, there is plenty of scope for Skrill to expand further in this space, for example, into crypto-based payments.

Skrill users can apply for a pre-paid Mastercard that allows them to top up and withdraw funds from ATMs all over the world. Fees apply for ATM usage and foreign exchange.

Skrill launched its loyalty program, called Knect, last year. Users can earn points for carrying out transactions and spend them on a variety of rewards, such as gift cards, event tickets, or sports merchandise.

Skrill also operates a business service allowing merchants to add a quick checkout solution for Skrill users to its website. The company partners with all major shopping carts, including Shopify and Woocommerce, and supports over 3000 banks worldwide.

Skrill has managed to maintain its place in an increasingly crowded market. The company has recognized the need to continue growing its range of services and geographical footprint. Particularly by expanding into cryptocurrencies, it can stand out from the competition, as Revolut is currently the only one of its rivals operating in this space. The expansion to the US will help to cement its position as a market leader in online payments and pave the way for further growth.