How Ethereum (ETH) Could Sink Into Oblivion

Ethereum (ETH) is on the verge of a massive decline now that it has declined below the $230 mark. The daily chart for ETH/USD shows quite clearly what the cryptocurrency stands to lose during the next downtrend. The question is not whether ETH/USD will decline again or not. The question is, “Will Ethereum still be the second largest coin by market cap when the bear market is over?”. The probability is high that Ethereum (ETH) might hold its ground better than other altcoins so it may be the second largest coin immediately after the bear market. However, that being said, Ethereum (ETH) is no longer the coolest kid on the block.

There was once a time when Litecoin (LTC) enjoyed the same spotlight that Ethereum (ETH) currently does. While it may still remain one of the top ten, the probability that it will be the second largest coin by market cap during the next bullish cycle is low. There are a lot of promising blockchain projects in the works that are ready to take on the likes of Ethereum and Tron. After all, it is not just about the project; it is also about how competent the team behind it is. Ethereum (ETH) could lose support during the next cycle as stakeholders jump ship to found or join new projects. This is a trend that we have been seeing consistently in the cryptocurrency market. 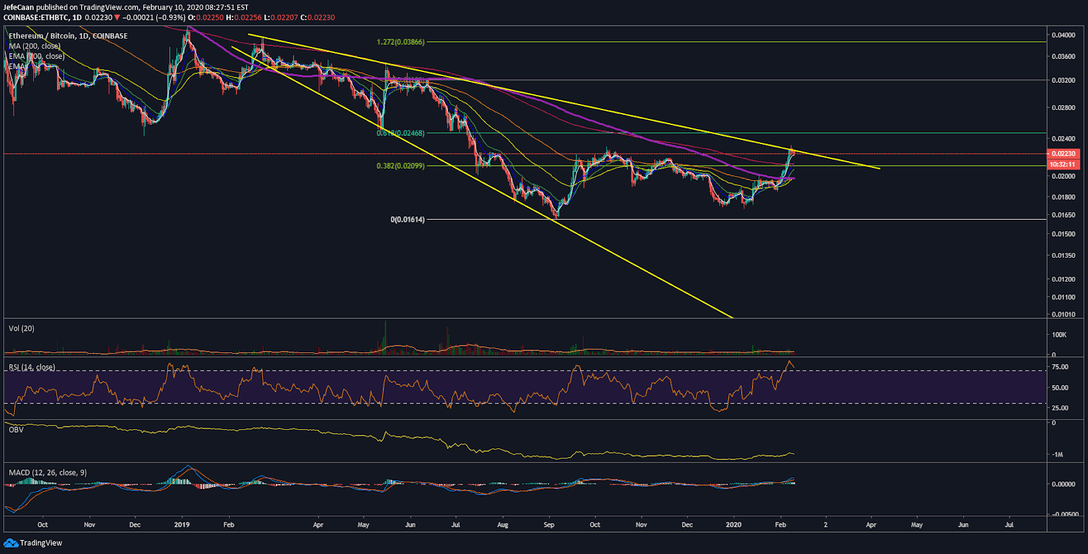 Ethereum (ETH) has also begun its downtrend against Bitcoin. It is expected to get a lot worse before halving as we see capital move out from Ethereum (ETH) and other altcoins into Bitcoin. So, any manipulation would be portrayed as an exodus of capital which gives the whales opportunities to dump their bags as well as to liquidate leveraged longs. The altcoin market has yet to see more pain. The daily chart for ETH/BTC shows what Ethereum stands to lose against Bitcoin during the next downtrend.

It is no doubt an alarming picture and indicates how the market might slow bleed all the retail bulls amid the halving FOMO. Before they realize it, the price may have declined much lower while they are holding and then they would want to hold some more expecting a reversal until it is too late to get out. Ethereum (ETH) is very likely to lose its spot as the second largest coin by market cap during the next potential bullish cycle. It has already lost it to Ripple (XRP) before but now the whole controversy around Ethereum’s split into ETH 2.0 and ETH 1.x tokens could deal a serious blow to the price of Ethereum and it might end up meeting the same fate as Bitcoin Cash, if not worse.

PREVIOUS Could Blockchain Be in the Feds Headlights?
NEXT XRP Security Lawsuit Given Green Light By Judge