Is Bitcoin (BTC) About To Repeat History Again? 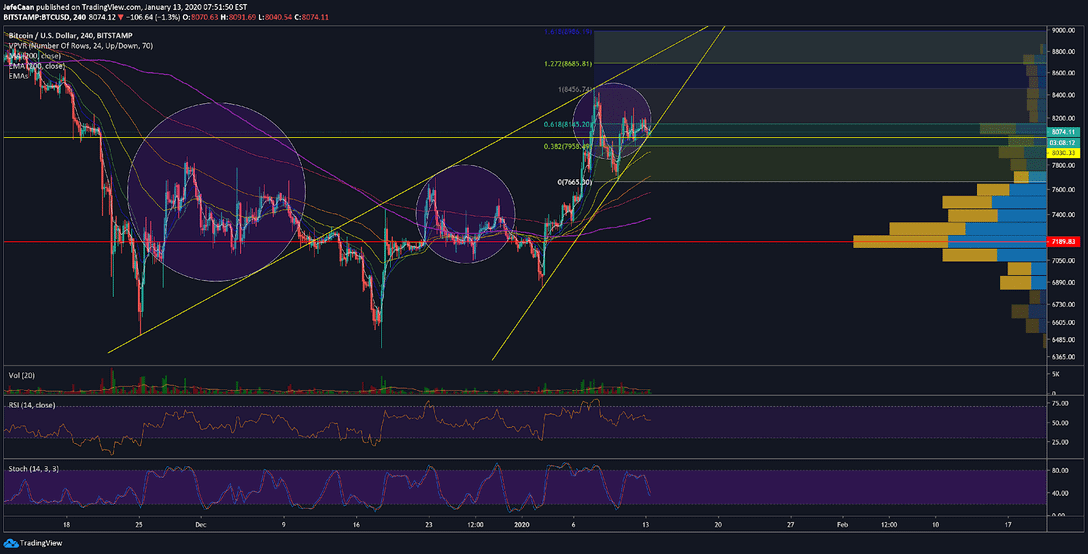 Bitcoin (BTC) is waiting for a decision as it remains within the rising wedge that it has been trading in since the beginning of the year. We have yet to see BTC/USD make a decisive move out of the rising wedge. So far, the probability of Bitcoin (BTC) doing what it has before i.e. printing a gartley pattern and declining lower seems pretty high. The 61.8% fib retracement level at $8,145 has been a strong resistance to breach and if we see a break below the rising wedge then a decline down to the key support at $7,189 will be expected. It is important to note that until and unless we have a break below that support, the price could still rise further or remain rangebound for a long time.

Recent weeks have seen an increased interest in Bitcoin (BTC) once again primarily in anticipation of a potential pump before the next halving. There is no established trend of the price shooting up before a halving event although we have a pattern of BTC/USD rallying after the halving. During the last halving phase, Bitcoin decline before and after halving for a while before it eventually began an uptrend. Similarly, this time we have half a year before the next halving. This is a very long period of time and a lot could happen during this time before the next halving. Regardless of how halving will actually impact the price, to most retail traders it is a bullish event that will surely lead to further upside long term so they have no problem stacking up now because they don’t want to risk the price rising further.

Unfortunately, what most retail traders do not realize is that trading is a zero-sum game. The commitment of traders (COT) report for Bitcoin CME Futures shows that the whales have been net long on Bitcoin (BTC) for a long time now. This time, they may not only close their longs but become net short once they have capitalized on the optimism around the upcoming halving. Thinking about it from a whale’s perspective, considering the influence they have in manipulating price action, it makes a lot of sense for them to sell Bitcoin futures and dump their coins on exchanges to crash the price. They have done it before and they can certainly do it again.

PREVIOUS Secret Project Announced by TRON, ‘Multibillion Benefits’ For Ecosystem
NEXT Where 2020 Will Take Bitcoin And Its Applications