Why Bitcoin Is Not As Censorship-Resistant As You Might Think

Why do we really even need privacy features if we aren't criminals, dealing drugs, or sailing on nefarious sites within the dark web? Well, we don't have to be criminals to protect our private life, and money is an important part of it. In a world where all bank transactions are monitored and with the risk of all your savings being frozen with the click of a button, it’s possible that private anonymous transactions will become more and more popular over time.

Wealthy people used Swiss banks for centuries, as Swiss bankers kept their clients’ credentials secret. Nowadays, however, they hand over that info to the US government and there are only a few options left for those seeking privacy. One of them is paying with cash, while another one is hiding money in offshore accounts. But the latter is only available to rich people and can be considered illegal in many countries. Anyway, there’s a third option: private coins that are available to anyone. Thus we’ll be talking about these in this article, such as TeleCoin, Monero, Zcash, and we’ll see what solution is the best among them.

Initially, when it was still relatively new, Bitcoin was used for shady things, such as trading in the dark net, buying/selling drugs, weapons, fake documents, etc. People were doing it, because there was no way to find out the true identity of the two exchanging parties, as there was no connection to real people and real bank accounts, only a sequence of numbers and letters. 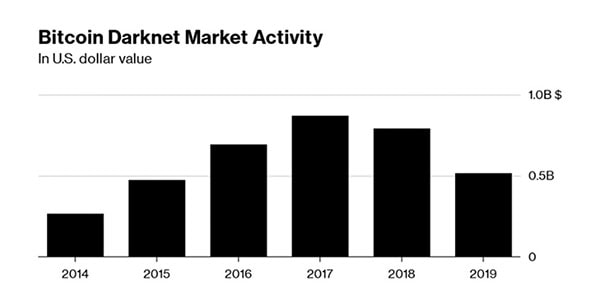 During that time, people were mining “clean” Bitcoins, which had no history. The privacy was kept only because nobody cared about Bitcoin yet. Now the landscape has changed. New coins are being mined by large mining pools, and FBI/CIA have advanced tools to track real identities of Bitcoin owners. They get help from companies like Elliptic and Chainalysis. Also, according to Snowden’s leaks, the National Security Agency has been monitoring the internet activities of Bitcoin users since 2013 through a program codenamed OAKSTAR.

So, FBI and Europol are tracking all transactions, and link them with real persons, building a database of Bitcoin addresses. They do it constantly, and now Bitcoin can’t be considered a private coin anymore. Luckily, though, we have alternatives.

Among the privacy-oriented coins we can name TeleCoin, Zcash, DASH, and Monero. What technologies allow them to hide the addresses of senders?

Overall, among all these coins, the newest and most interesting one is TeleCoin. It incorporates many private features that were invented by its predecessors. And it’s also a lot faster, because it works on the Proof-of-Stake consensus model, unlike all the other coins without compromising on its anonymity. So, if we choose TeleCoin among all these private coins, what advantages does it have when compared to the most popular cryptocurrency - Bitcoin?

Bitcoin works using the Proof-of-Work protocol. Its network security depends on the hashrate and number of active miners who produce new blocks and coins by processing transactions. Being a secure network has its downside - Bitcoin is currently the slowest blockchain in the crypto world. TeleCoin, on the other hand, uses the Proof-of-Stake protocol. PoS doesn’t require expensive computations - that’s why it’s fast. Coupled with the SwiftTX feature, this allows sending coins with zero confirmations; a transaction in TeleCoin network takes less than a second.

The distribution of new coins is similar in both cases - those who secure the network, by providing their stakes or computing power, receive a reward in coins. TeleCoin stakers receive 0.8409 TELE per block for 1% of all coins staked, while Bitcoin miners get 12.5 BTC for finding a new block.

The governance model in Bitcoin works via BIPs (Bitcoin Improvement Proposals). Everyone can propose their changes to the protocol, and miners can vote on these changes by upgrading their software with these changes included. The TeleCoin governance is established by masternodes, which can vote on upgrades.

Anyway, if we compare them by anonymity, Bitcoin has nothing to offer - it has no private features, as all of its transactions are transparent. The FBI, CIA, Europol, and countless other agencies collect information about Bitcoin addresses, the movement of Bitcoins between wallets, and even tracking the smallest payment can lead them to the wallet’s owner. For example, many exchanges require basic KYC procedures - deposit your coins once, and you can send them wherever you want after that - you have already left a trace.

TeleCoin is more private - if you want to stay covert, just send your coins via a masternode mixer two or three times, and you’re safe from tracking. At the same time, the team of TeleCoin doesn’t have any previously developed successful projects in their portfolio. The big test for them is the upcoming TELE mainnet launch which is set for October this year, according to their roadmap.

The trend for overseeing the movement of money is likely to continue, and it can get even worse. As the main crypto asset, Bitcoin is drawing a lot of attention right now. Governments around the world aren't interested in uncontrollable Bitcoin,  “libertarian” money as they see it, which is why it will be monitored and regulated more and more. Sadly, it doesn't have any features to allow resisting this supervision – it’s totally transparent. Thus, those who care about privacy will inevitably move to other solutions; other private coins. Of course, the likes of TeleCoin won't rival the supremacy of BTC, but they will find their own application. Bitcoin was developed as the money for free people, but maybe Telecoin’s privacy coins will accomplish that goal.