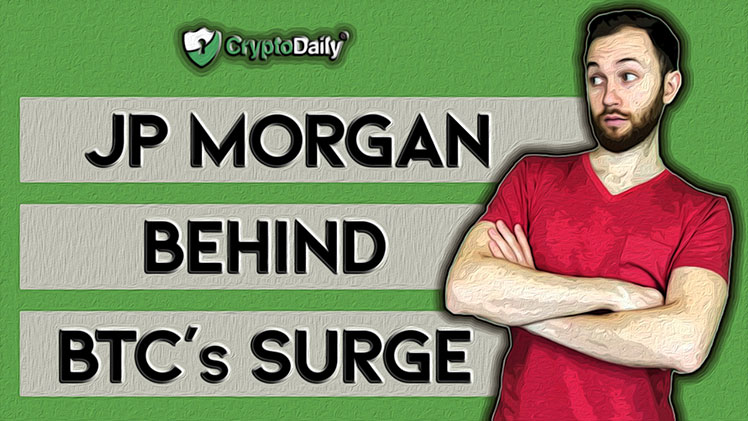 Ever since the start of cryptocurrency with Bitcoin ten years ago, things seem to have come a long way. Over the course of the crypto space, we’ve seen highs and lows and more recently, JP Morgan Chase announced the development of the JPM Coin which came as a surprise to many since the CEO Jamie Dimon said many years ago that Bitcoin was a ‘fraud’. Nevertheless, the financial institution plans to deploy the cryptocurrency in its corporate payments operation in the near future.

Rumours are suggesting that the announcement is what has caused the leading cryptocurrency to gain some momentum over the past few days such as Tuesday afternoon when Bitcoin was priced at $3,982.

If this value can stay at similar levels or even bolster above it until the end of the month, then Bitcoin will score its first positive month since the crypto prices started to drop in the summer of 2018.

The senior online market analyst for the trading platform eToro, Mati Greenspan said that the recent gains we have seen Bitcoin experience could “suggest that the long-awaited bull market is not far away”. Greenspan added, that “until bitcoin sees a strong breakout above the psychological level of $5,000 (£3,860), the longest bear market in cryptocurrencies short history continues.”

Was JP Morgan behind the surprise price surge?

Some experts have got a incline that the unexpected price surge from Bitcoin is a result of the move by JP Morgan’s to launch their own cryptocurrency.

The companies JPM Coin is based on blockchain technology and so it will be used to facilitate extremely quick transactions of money transfers.

Even though this freshly announced cryptocurrency will only be used for internal online payments at the bank which isn’t available for public trading, the decision to move suggests that the wider financial sector isn't ready to adopt the controversial tech.

Speaking on the matter, Forbes have said:

“At the end of the day, the fact is that JPM using the digital coin for cross-border payment only strengthens the entire space” and “fosters the very concept that these digital coins are the future”

It’s worth noting that over the recent months we have seen both good and bad news yet none of it seemed to shift the market. When one of the commissioners from the United States Securities and Exchange Commission said that the Bitcoin ETF WILL be get accepted at some point this year, the markets didn’t move. This was news that thousands of enthusiasts will have wanted to hear but the markets didn’t move.

This could be a sign that news and what’s going on in the surrounding environment in the crypto space isn’t affecting the coins and tokens anymore.

So with this in mind, did JP Morgan even have an impact on the market or adoption?

Whether the market of adoption is being driven by big banks or not, cryptocurrency is clearly no longer “in the land of the lawless.”

The co-founder and Vice Chairman of BitRail Cameron Chell said that it is the fact that the technology is able to reduce the friction of payments and implement compliance and security is what will drive the adoption of cryptocurrency.

Following on from this he said that “adoption is like water. It’s going to go where cost savings are the greatest, and where there is the least amount of risk. I don’t think the key factor is having banks adopt it.”

Even though the announcement of the JPM Coin from JP Morgan was sudden it was also ‘validating’ according to Chell. The desire of merchants will help drive adoption in order to enable seamless digital payments. This is without having to pay the fees or give up the customer data to third party service providers such as Visa or PayPal. For example, this information can be valuable to businesses that wish to develop their own loyalty programs.

The low-hanging fruit of the corporate payments space is probably vendor payments. And in the ability to implement verification into transactions. Based on BitRail’s own conversations with other companies and potential customers, people are intrigued by the idea of using cryptocurrency in accounts payable, particularly among logistic companies that want to use blockchain technology for track and trace functionality.

In addition to this, Chell added that there would have been multiple gig economy players who would express their interest in using cryptocurrency for real-time payments for gig workers. Even though there have been some interesting inquiries amongst treasurers at big firms exploring the use of blockchain and cryptocurrency for things like foreign currency conversion and automatic sales tax calculations.