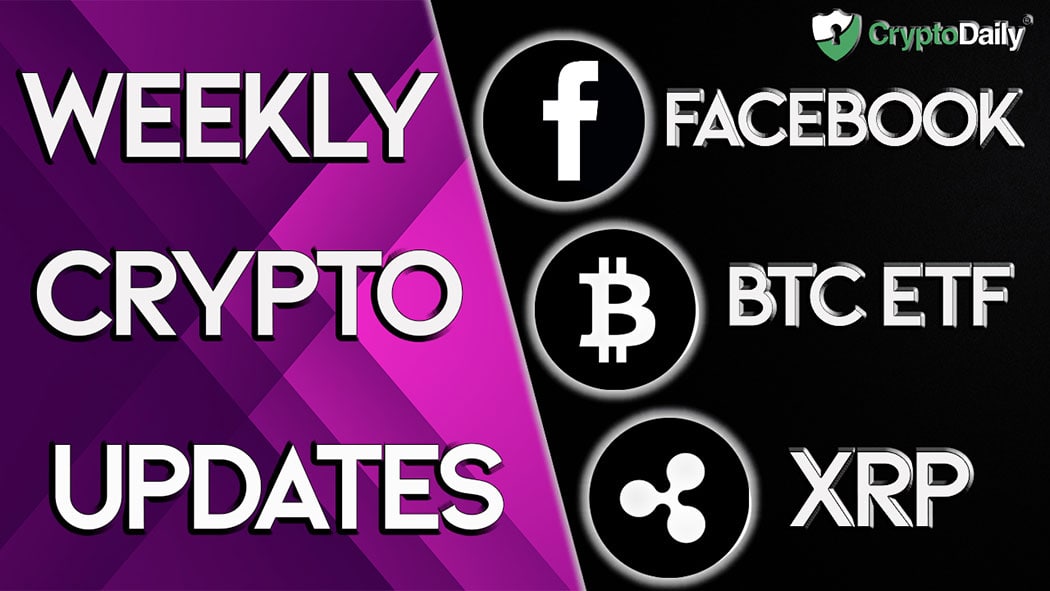 It’s time for another weekly round-up of the news that matters in the cryptosphere this week. We have seen numerous suggestions that a Bitcoin ETF may see approval in the coming months, news regarding XRP market cap manipulation, and even a massive blockchain acquisition from Facebook. It’s an exciting time to be in crypto, that’s for sure.

One interesting story that came out of this week was that a solicitation notice was issued by the Securities and Exchange Commission (SEC) in the United States. With institutional finances getting ready to flood into the market and save cryptocurrency (we hope), the SEC’s chairman has spoken out about the lack of surveillance as well as an instance fraud at the CoinDesk Consensus Invest Conference. In addition to these topics, Jay Clayton said why he isn’t prepared for the Bitcoin ETF to occur:

A solicitation notice was released earlier this week that aimed to push cable firms to provide viewable data of the most common blockchains in a way that “there is no loss in data completeness and accuracy due to the data transformation tools and processes applied.”

The United States SEC said that potential companies aim to:

It was just pure coincidence that the notice came when the OCIE (Office of Compliance Inspections and Examinations) made cryptocurrencies the top of their list for assets to examine in more depth over this year. The OCIE published a report saying that they:

“Will continue with their mandate, complementing and advising the SEC in their effort to protect the American people.”

Will a Bitcoin ETF be approved any time soon? We sure hope so, but for now, we are doubtful.

Earlier this week, Ripple moved more than $300 million worth of XRP from one of its escrow accounts to an unknown wallet. The transaction had had a simple message attached to which said, “crawl… walk… run ;)”. There are rumours there the firm has locked $80 million worth of the total transfer.

Last year, there was around $535 million worth of XRP sold by many of its buyers, which now looks more like an attempt at pumping the price of XRP and dumping it again. The idea of this is to allow investors to work together to sell at a prime price point. Now there is a chance that this is true as Ripple currently holds around 60 percent of the overall supply of XRP, but there’s no way of knowing if Ripple themselves are behind this pump and dump scheme.

There have been several rumours surrounding Ripple’s price and one of the people who has been at the front of these rumours is Ryan Selkis, the CEO of Messari. Selkis believes that Ripple has been lying about the market cap for XRP. In fact, there have been numerous reports by the Messari CEO, one of which says that billions of XRP are being added to supply from nowhere.

There is a lot of argument that Ripple is centralised rather than decentralised because the company holds such a large amount of its native token. Despite this, a recent Twitter poll by the user @MrLedson asked his followers as to which cryptocurrency will see the biggest gains in 2019 out of HOLO, TRON, Ripple and Monero. Just under 2,000 votes later Ripple got 79 percent of the vote.

There are many people in the crypto space that are expecting to see Facebook integrate blockchain, as a major tech firm, the social network always seems to be on top of emerging technologies. With this, it doesn’t come as much of a surprise that Zuckerberg’s company are already exploring blockchain technology.

There are several rumours that indicate Facebook could be on the verge of launching their own in-app cryptocurrency which could be used in Messenger and WhatsApp. There are others though that believe that Facebook isn’t actually that bothered about cryptocurrency and that their real focus is on the underlying technology that drives them, blockchain.

In the end, it won’t really matter what they are planning since the massive scope Facebook has will make whatever they launch very significant. There are more than a billion people on Facebook which means that whenever the system gets confirmation to go live, one billion people will have access to the blockchain.