The Lessons TRON Must Learn With BitTorrent 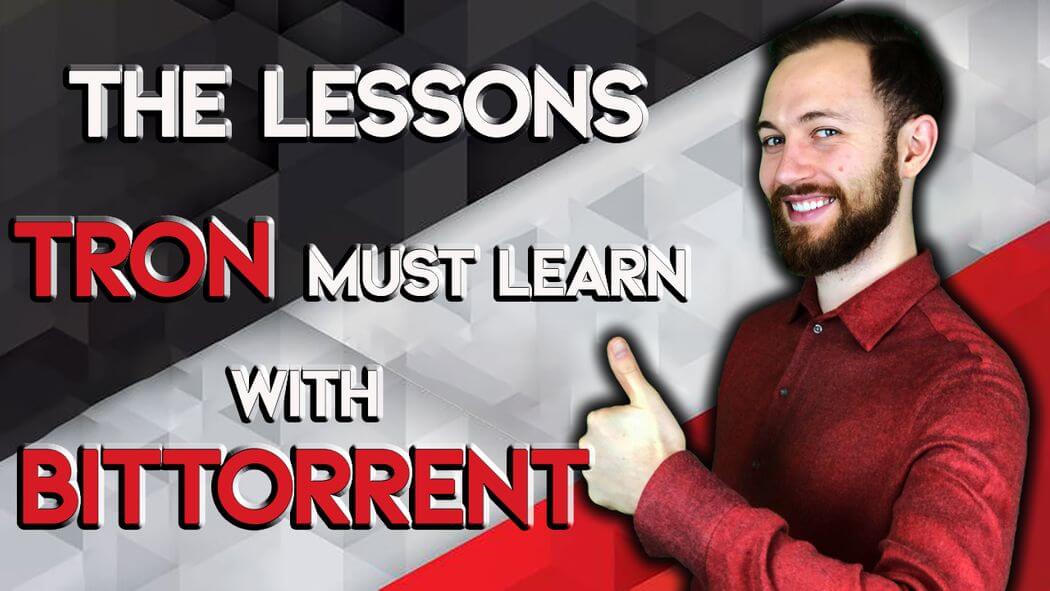 During the middle of 2018, blockchain specialists TRON, the team behind TRX spent an alleged $126 million on the acquisition of BitTorrent, one of the world's leading peer to peer file sharing platforms. At first, the acquisition failed to shake things up, many people were left a little confused about what this purchase could mean, 6 months later, however, it seems pretty clear just how TRON intend to fit BitTorrent into their roadmap going forward. Now, TRON plays an integral part in the file-sharing network and the two have quite a promising future together.

We should note that back in the early days of Bitcoin’s creation, Satoshi Nakamoto (whoever that may be) once noted that file sharing would be the key to the success of the blockchain within a totally decentralised network. With this in mind, the motivation behind TRON’s move became pretty clear, to create a fully decentralised internet, one that could achieve great things.

“Tron founder Justin Sun says the deal makes his firm the largest decentralized Internet ecosystem in the world. Bittorrent said in a statement last month it has no plans to change what we do or charge for the services we provide, but it's not clear what TRON’s plans for Bittorrent will be going forward.”

Now, many months down the line, we want to explore some of the lessons that TRON need to learn and should have learned when it comes to ensuring this pairing can benefit the future of cryptocurrency. A decentralised internet is great, but if it doesn’t benefit our industry then what’s the point? We are sure Sun understands this as frankly, why would he spend $126 million on something that doesn’t benefit his business?

Simon Morris, a Bitcoin writer and ex-employee at BitTorrent has recently concluded a series of Medium posts that have been designed to highlight what he believes TRON need to remember when moving forward with this acquisition. The posts come across four chapters and cover the following;

In each article, it does seem that Morris is attempting to be little some of the work done by TRON, however, in pursuit of transparency we want to explore some of the lessons that Morris believes are important for the future of crypto, when it comes to considering a decentralised file sharing internet, led by TRON.

“The BitTorrent ecosystem mattered fundamentally for two reasons; firstly, BitTorrent for the first time made the sharing of very large files possible for anyone with an internet connection without the need for any special infrastructure. This led to explosive growth in the popularity of BitTorrent for sharing large digitized media objects. Second, the open and decentralized architecture of both the technology and the community meant that it was essentially impossible to shut down BitTorrent file-sharing.”

Here, Morris is asserting that he believes Bittorrent laid out a path for the invention of blockchain technology and that TRON cannot forget how the Bittorrent community has helped bring Sun to the heights he resides at today. In short TRON can’t afford to forget the community that helped build this up, otherwise the acquisition will have been for nothing.

“The general purpose public blockchains out there might best be understood as platforms for rule-breaking apps. (For if there are no rules being broken it becomes tempting to ask why a decentralized architecture is the best tool for the job.) If I were an investor I’d be asking any apps (or dApps) on top of these platforms the question what rules are you breaking?”.

Here, Morris seems to believe that in order for TRON (and other blockchain projects) to flourish, they need to ensure they continue to break the rules and the foundations that make blockchain technology attractive in the first place. We see his point, overall, regulation could totally wipe out the need for a decentralised internet, assuming that internet is unable to break the rules that stop the ‘regular’ internet from being decentralised in the first place.

Lastly, and one of the rules dictated by Morris that does seem to be being addressed by TRON:

“There are a number of crypto-projects which are trying to address the governance issue with various approaches to enabling decision-making that is ‘fair’ and ‘effective’ (for some definition of those terms). But in practice the only way to make any large-scale governance viable is to re-centralize power in a smaller number of deciders with some number of rules around how you can become and remain a decider.”

As you may know, TRON has a voting system in place that means general consensus is met through a democratic voting process, carried out by ‘super representative’ members within the TRON ecosystem. How this translates into the BitTorrent ecosystem is still somewhat unclear, though we can see that Morris strongly believes that level of democracy also needs to be present within this new, decentralised internet or it risks falling apart as a result of the anarchy caused by a lack of a responsible figure within the ecosystem.

We do hope and do believe that TRON will succeed in helping to build a fairer and more decentralised internet for all. The acquisition of BitTorrent is of course key to that and therefore we hope that the use value of the new BitTorrent ecosystem continues to grow at the rate TRON seems to expand too. One thing we can take away from this, this is all good news for TRX, a cryptocurrency that seems to grow in strength by the day, thanks to the hard work of the TRON Foundation and their investors.