Cardano ADA: A Year In Review 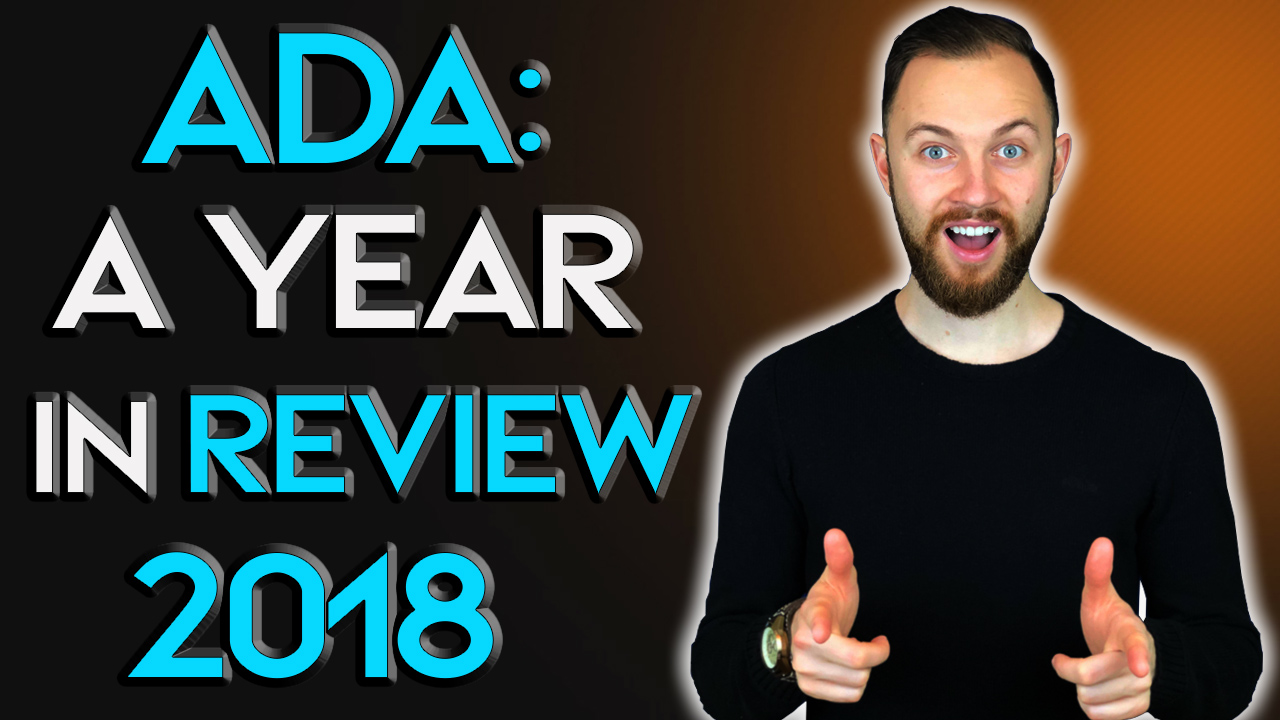 2018 will go down in history for cryptocurrency. Often, for all of the wrong reasons too. During this year, we have seen all time high records smashed out of the park, which is great of course. However, we have also embarked on a number of steep declines too. Cardano’s ADA is of course no exception to this.

Through the year, we have of course seen some great development from the teams behind Cardano. This project is a funny one, in that Cardano and it’s products are managed by a number of different companies, all of whom have something very different to offer the project. Now, we are going to take a look back through Cardano in 2018, highlighting some of the more important movements from within the Cardano brand and of course, ADA, Cardano’s native cryptocurrency.

ADA started the year like the rest of the markets, within the biggest bull run seen to date in cryptocurrency. During this time, ADA hit an all time high of $1.32, a figure it has not yet managed to pass as a result of the bear market that trapped crypto for an entire year in the wake of the bull run. The spike in the value of Cardano was seen as a turning point for this project, bringing the name of ADA to the fore and very much inspiring some new investment, investment that managed to help ADA remain as one of the biggest cryptocurrencies in the world. Just one month later, at the start of February, ADA dropped down to $0.27.

The decline of ADA continued through February and March, though we must remember that this was not the fault of Cardano, and actually, this was a decline seen across the entire cryptocurrency markets. In order to inspire some love back into the Cardano project, during April, Charles Hoskinson, the CEO of IOHK (one of the leading teams within the Cardano project) took to the internet to leave an update on the development of the Cardano project. This was followed by a short bull run, that helped to boost the value of ADA up to $0.37, though this was soon lived, as ADA stooped to $0.17 by the end of May.

During the update, Hoskinson reiterated just how committed all of the teams are that currently work on the project, indeed, some of what he said continues to ring true today:

“Cardano is a huge project. There are so many brilliant minds, great engineers and parallel efforts that it’s difficult to capture all of it in a single post, much less just convey our progress. What’s also amazing to me is how quickly our scientific research is moving from the lab to code. We have also bought game theorists and programming language theory experts together.”

The team continues to expand even today, with more great minds working on Cardano than ever before.

From April through May and into June, Cardano saw very little in the way of major announcements and moreover, ADA failed to really make any significant movements. Of course, ADA did spike during the mid-April bull run, however as we have stated, this was very short lived and was followed by a huge retraction in the value of ADA. We know that by June, those who invested during the January bull run had been left to feel pretty exhausted. During June, ADA dropped as low as $0.11, from an opening price of $0.23.

“Now for the first time Cardano has a real brand identity that exactly represents the project in a visual way. We will be rolling out this restyle across the rest of our assets, including Why Cardano and Cardano docs. At IOHK we believe that Cardano is not just a development project: it is distributed systems, it is social science, it is a political movement, and among other things, it is also a design challenge.”

Though this rebrand hit the headlines, it didn’t encourage ADA to move upwards by an significant means, instead, ADA continued to retreat, by October, ADA actually reached a low of $0.07, which continued to decline to $0.02 by December 2018. However, this this in mind, october did present one of the biggest announcements from within the entire Cardano structure, a move from IOHK and Emurgo (two of the teams behind Cardano) to take over total control of the project from the Cardano Foundation, an entity that Charles Hoskinson did not believe was pulling its weight with regards to the progress of Cardano. In an open letter to the Cardano Foundation, from IOHK and Emurgo, Hoskinson said:

“As the CEOs of IOHK and Emurgo, we are deeply disappointed that we have not been able to activate and increase the performance of the Foundation. We have not been able to resolve the above outstanding matters in another way. We are also deeply disappointed that our community has been repeatedly let down by the Foundation, yet we are determined to ensure that the community will be served in the manner it deserves to be served. Regardless of the above, we believe our best days are ahead of us. We believe Cardano will become the best technology to deliver financial infrastructure to the billions who lack it.”

This, eventually let to the resignation of Michael parsons, the chairman of the Cardano Foundation in November 2018, allowing IOHK and Emurgo to take a more prominent lead in order to take the Cardano project to the next level, through 2019.

As you can see, it has been a very exciting year for Cardano and ADA, there have been a number of exciting developments that will have investors keen to see what happens next. Indeed, Cardano is a long term project, which means ADA is a long term investment. Therefore, 2019 presents some very exciting opportunities for the pair, we can’t wait to see what the next year brings and we can’t wait to see exactly what Hoskinson, IOHK and Emurgo all have in store for Cardano and ADA.