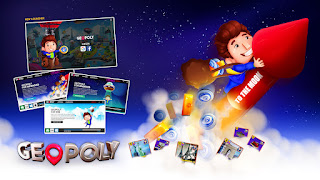 Geopoly has announced the launch of a blockchain-based alpha version of the game, which will be playable via desktops. This is a game in which players can interact with the blockchain along with their respective Geopoly non-fungible tokens while simultaneously enjoying the gameplay and earning an income at the same time. Moreover, NFT holders who are actively playing the desktop game are also entitled to receive $GEO tokens on a weekly basis as compensation for their time and efforts.

In addition, Geopoly also has a mobile and freemium version which enable users to play the game for free. Afterwards, if the players wish to do so, they can even ‘win and earn’ by shifting to the blockchain version with the same credentials which will allow them to pick up right where they left off in the desktop version.

In terms of what it is, Geopoly may hence best be understood as an economic simulator which enables people to rent, purchase, improve, and actually sell estate as well as business assets based on their geolocation. Geopoly has been constructed through a system which relies on both off-chain and on-chain layers which are then utilized to provide users with a real-world-oriented dynamic, immersive and memorable gaming experience.

What else is there to know about Geopoly?

Beginning in July, the ‘Geopoly Auctions’ market shall open, allowing players to sell their NFTs at a price they choose while others can bid on them for a minimum of 24 hours. The NFT will then be awarded to the highest bidder. This is a brand new and exciting way for NFT holders to sell their non-fungible tokens and profit, in addition to also being able to buy an NFT from another player or through Geopoly itself. This month's auctions include landmarks such as the Hollywood Sign, Ponte Vecchio, Flame Towers, London Eye,, Seul Tower and Maracana Stadium.

Moreover, a number of popular NFTs have already been sold including the likes of Louvre Museum and even world-renowned stadiums such as Santiago Bernabeu, Camp Nou, Old Trafford, and Wembley. Furthermore, Geopoly has recently partnered up with NextNav, which will provide the technology that Geopoly shall implement into its framework in the future. This shall include NextNav's 3D geolocation functionalities, allowing for more dynamic virtual experiences linked to users' real-world environments and leveraging location verification in order to confirm transactions as well as interactions within the metaverse.

Essentially, building the metaverse requires 3D geolocation technology. With that in mind, NextNav's technology would not only power in-game experiences, but it shall additionally be a critical authenticator of location-oriented activities such as exclusive exhibitions, NFT scavenger hunts, and transactions pertaining to digital land and real estate.

Last but not least, Sebastian Borget, one of the main advisors, will also be working with Geopoly which is additionally a proud member of the Blockchain Game Alliance (BGA). Sebastian is also the COO of The Sandbox (SAND), one of the most popular P2E metaverse-based games today.

Past accomplishments and future goals

Geopoly was released on mobile in 2018 and was included in the list of the four most innovative mobile games on iOS by the Apple Latam team during the soft launch period. Additionally, it was chosen from 1,700 applicants from 37 nations to take part in the 2019 Global GOOGLE Indie Games Accelerator.

Geopoly has also collaborated with Seedify, Enjinstarter, Poolz, and NFTPad by Trustpad to launch the public sale of $GEO tokens, which can also be earned through Geopoly NFTs. It is additionally supported by leading blockchain platforms such as GD10, AU21, X21, Polygon, and various other notable entities. Lastly, within 48 hours of its launch, the private sale had reached its hard cap of $3 million. This achievement demonstrates that investors regard Geopoly as a platform with great promise to become one of the biggest gaming hubs within the blockchain space going forward.

In terms of future goals, Geopoly will continue to develop and improve their product while also expanding their player base. In order to make the game more fun and exciting, the team is also working on introducing a PvP mode, where players would be able to attack each other's 'Branches', steal non-tokenized resources, and defend their own territories in this upcoming new game mode.

Conventional finance-based simulation games have various flaws because only publishers tend to reap the rewards. In such situations, gamers usually only act as end-users who buy in-game items with no opportunity to earn rewards outside of the game.

The industry has since been transformed by the innovative usage of blockchain technology, which allows all kinds of assets within the game to be successfully traded for different tokens which may be subsequently turned into fiat currencies. Geopoly, with its groundbreaking gaming ecosystem, is among the platforms at the forefront of this new digital revolution.

Geopoly has selected Polygon as the foundation for its on-chain game. Polygon is a Layer-2 blockchain protocol which provides scalability as well as low transaction costs via the Ethereum blockchain. Now, thanks to the launch of the aforementioned alpha version, Geopoly is ready to take the next step as per its official roadmap.