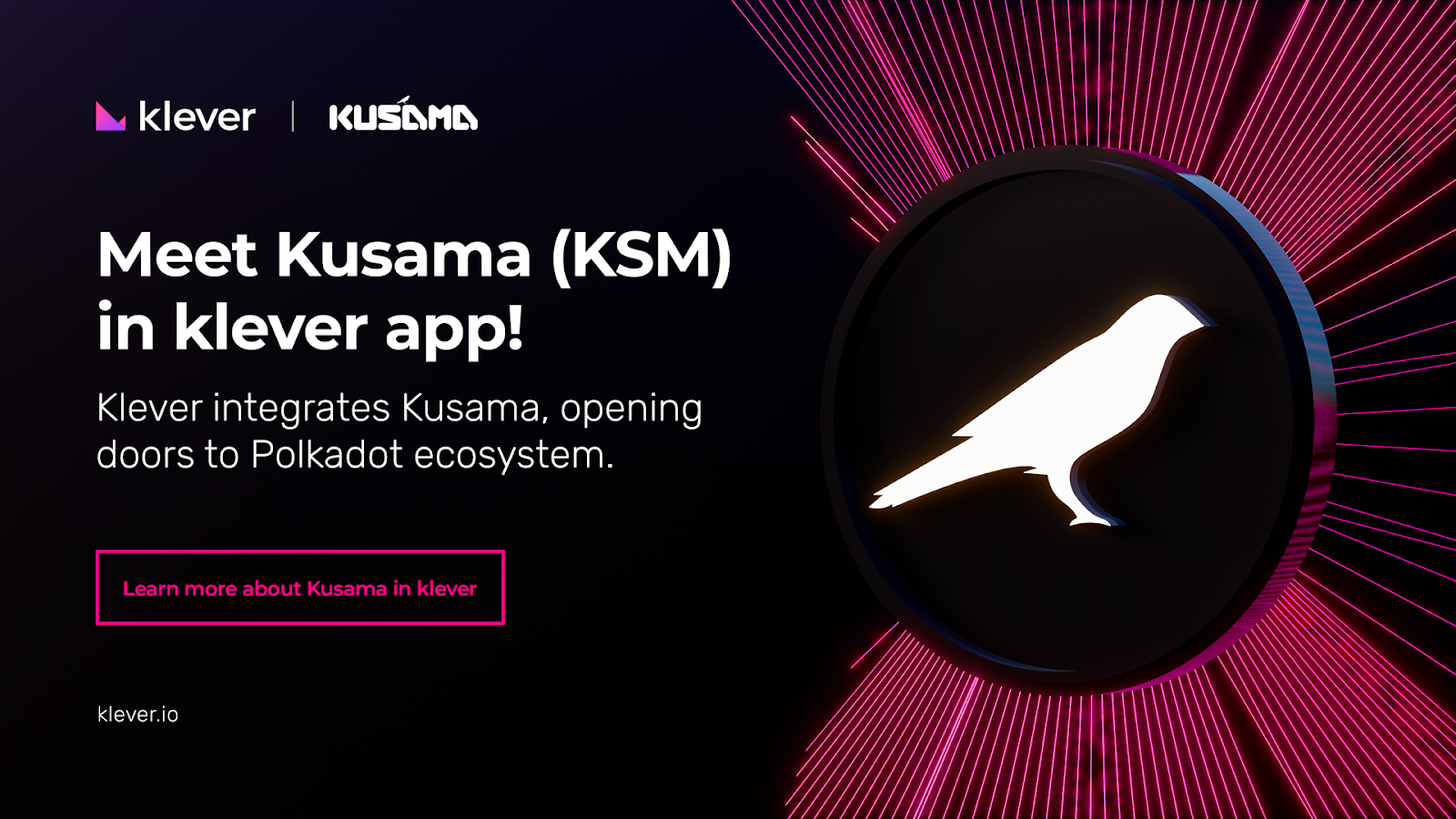 With the constant goal of providing more utility, features and access to prominent blockchain projects to our 3 million plus global users, Klever has now integrated one of the world's fastest growing blockchain platforms, Kusama (KSM).

The Kusama upgrade is available in Klever’s new Update 4.4.0.

Klever.io is now also a validator on the Kusama blockchain, bringing years of experience operating hundreds of nodes on dozens of the world’s major blockchains.

Kusama and Klever users will be able to nominate Klever’s validator node and other validators on the Kusama network seamlessly inside the Klever app.

In addition to supporting Kusama, the Klever wallet aims to support many more promising projects running within the Polkadot ecosystem.

Kusama is a decentralized public network of multiple specialized blockchain built using nearly the same codebase as Polkadot. For this reason, it can be used as a pre-production environment for Polkadot that allows any developer to experiment and test new blockchains or applications before releasing them on the Polkadot network.

As a network with real value, it acts as a kind of sandbox for developers looking to test early versions of Polkadot projects, but with real cryptocurrency traded on an open market.

Kusama is a more experimental version of Polkadot where developers can create any kind of projects, whereas Polkadot can maintain a high level of security.

Polkadot is a  next-generation, heterogenous, decentralized multi-chain network which enables external networks as well as customized layer one parachains to communicate, creating an interconnected network of blockchains.

Several prominent blockchain projects are building Polkadot parachains and are expected to launch later this year, including Moonbeam, Acala, Astar and many more.

Parachains are the diverse individual layer-1 blockchains that run in parallel on Polkadot or Kusama, but for the purpose of this article we will focus on Kusama.

Parachains are connected to the Kusama Relay Chain and secured by the Relay Chain's validator set. The key to Kusama scalable multi-chain architecture, parachains share in and benefit from the security, scalability, interoperability and governance of Kusama.

Kusama's cross-chain composability allows any type of data or asset to be sent between parachains, opening up a host of new use cases and applications.

Parachains can also connect to external networks such as Bitcoin and Ethereum using cross-network bridges, and can have a wide variety of designs and can be optimized for specific use cases.

Parachains connect to the Relay Chain by leasing a parachain slot via parachain slot auctions, by being granted a slot by Kusama governance as a common good chain, or by connecting as a parathread.

Substrate, a modular blockchain-building framework, is the backbone that powers Polkadot.

Why Kusama is important

The Kusama network is an experimental development environment for teams who want to move fast and innovate on Kusama, or prepare for deployment on Polkadot, one of the most promising interoperable chains in the world.

Kusama’s governance allows for faster upgrades than Polkadot governance, (seven days compared to 28 days). Because of this, Kusama-based projects are able to innovate quicker  than their Polkadot counterparts.

Klever will be adding many more staking options for numerous blockchains moving forward, so stay tuned.

Introducing support for more platforms for swapping, staking and participation within the Klever ecosystem is part of our overall goal towards a decentralized, thriving and inclusive crypto economy, powered by Klever.

By giving the keys to our users and empowering them to self-custody and take ownership of their crypto, Klever enables users to hold, send, receive, charge, swap, bond and nominate KSM in their Klever wallet.

The Klever.io team will continue to extend the integration with Kusama by building and launching new and additional features for KSM in the Klever app.

The Klever app serves as the epicenter of the Klever network. The Klever ecosystem supports the world's major blockchains such as BTC, ETH, TRX, BNB, XRP, LTC and many others for storing, sending, receiving, charging and swapping cryptocurrencies.

The Klever team, consisting of over 90 developers and 120 total global staff, is building several platforms under the in-house development entity, Klever Labs. These include Klever Blockchain, Klever Hardware Wallet, Klever Bank, and Klever 5.