BENQI Draws $1B in Assets Soon after the Launch 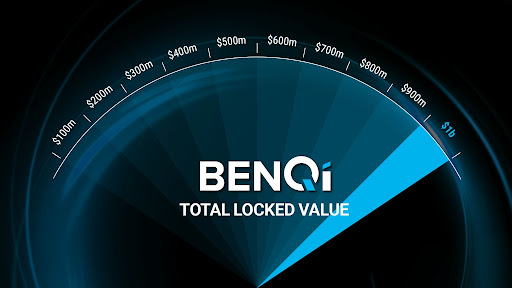 Only a few days following its launch, the algorithmic liquidity market protocol BENQI successfully reached an impressive 1B USD in assets. This extraordinary feat was achieved after BENQI went live on August 19th only. Since the BENQI and the Avalanche Foundation cooperated to implement a joint liquidity mining program, these assets have been literally pouring into its decentralized platform.

The BENQI protocol aims to help Avalanche users earn interest from their assets, collect QI governance tokens in exchange for the liquidity provided as part of the protocol, and receive credit through over-collateralized loans. The protocol went live on Avalanche C-Chain which is one of the segments of the Avalanche DeFi ecosystem. In the long run, its main objective is to act as a secure bridge that will connect the decentralized finance (DeFi) sector with the institutional networks.

Avalanche itself was created and launched as an open source platform for dapps (decentralized applications) and enterprise blockchain deployments that exist within the umbrella ecosystem that promotes interoperability and scalability.

Avalanche's native token, AVAX, is now flying high in terms of its value, which is hardly a coincidence considering that it took off after the announcement of the liquidity mining plan with the BENQI. Three million AVAX will be given out to BENQI users as a liquidity incentive, and the new incentive plans are already in the pipeline. AVAX will be provided as a reward to those who lend and borrow AVAX, ETH, LINK, wBTC, USDT, and DAI as part of the BENQI protocol.

In contrast with the Avalanche-based BENQI which managed to reach $ 1 billion TVL in just a few days, it took Aave 8 months to reach this breakthrough point.

The next phase of the project will revolve around the optimization of the protocol and pushing it in the direction of attractive financial primitives such as money markets.

Although BENQI and other related projects are now leading the effort, other dapps are planned for their premiere on Avalanche after the launch of the Avalanche Bridge, which acts as a stable platform for rapid low-cost asset transfers between Avalanche and the Ethereum network.