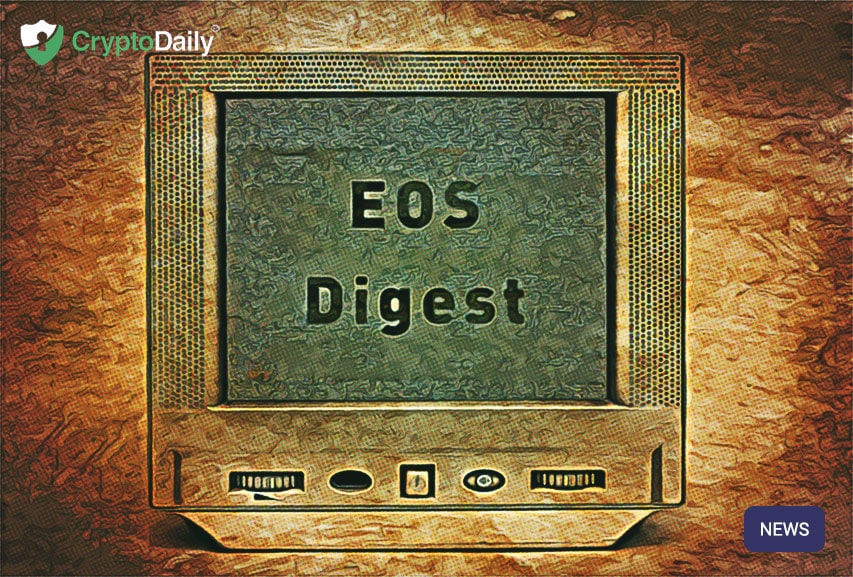 Welcome to another issue of Lumi Wallet’s Digest, where we break down and sum up everything that has happened on this blockchain. And as usual, there are lots of good news, bad news and some events, all which we’ll be able to classify only in perspective. For example, the EOS price has taken off, and that’s good. China has opened its arms to blockchain - and that smells of opportunity. The EOS network got congested, and that… Well, got complicated. So let’s get to the bottom of this.

dBonds team tokenized Deutsche Bank bonds on the EOS mainnet. It happened due to an agreement with the UK-based custodian Queen Street Finance and their EOS stablecoin DUSD.

LiquidApps presented horizontal scaling solution vCPU. To demonstrate the efficacy of driving down computation costs, it presented LiquidChess, with moves recorded on chain, but computation of moves legality happening off-chain.

CryptoLion was awarded with a bounty of $10,000 from Block.one for discovering an EOSIO exploit - a bandwidth spam attack.

WAX and dfuse announced a partnership to integrate their tools and enhance the development process of dApss on the WAX blockchain.

Blockbase, a platform for the secure and distributed storage of databases continues its airgrab series, and its first airgrab has reached its distribution phase.

EOSWriter, one of the most thorough EOS media, deployed EOSWriter 3.0, with a complete UI redesign, dedicated EOS Youtube player, EOS Market Cap Ticker and Sister chain Listings. We congratulate them and wish them a happy 1st birthday on November 19!

EOSIO 2.0 was introduced in the middle of October. According to their release statement, it includes main 4 components:

The release increased the speed of the network up to 16 times. Block.one CTO, Dan Larimer, revealed the team is already working on EOSIO 3.0, even though EOSIO 2.0 was just released. The main goal is to update the scalability of RAM.

Block.one published an official statement saying that the company will start participating in the voting of Block Producers. It is a major event, because since the creation of the chain Block.one has consistently declined to intervene in governance. The company decided to actively participate to improve and accelerate the process of new tools and upgrades integration. B1, block.one’s account, has about 100 million EOS and on top of that, it is quite possible that most of the users will follow the vote of B1, so in the governance game on a blockchain there is now a major player with obviously good intentions for the future of the blockchain.

The EOSIO 2 introduces alpha support for the EOSIO Quickstart Web IDE, which is designed to radically simplify the developer experience. With the tool, building on EOS can be started with one click - and after that a fully functional EOSIO development environment is launched in a browser. It opens the opportunity for virtually anyone to rapidly build and deploy their blockchain projects with EOSIO software.

Block producer candidates GenerEOS, EOS Rio, shEOS and Node One have teamed up with the aim of democratising the exchange voting process, implementing free open source end-to-end voting framework. It consists of several software components that can be installed on server infrastructure to provide a consistent, customisable, and user-friendly voting portal.

Currently they are polishing open-source code and conduct negotiations with major exchanges.

At the beginning of November, the EOS network was overloaded. Mostly it affected the CPU.

The cause of the overload was probably the EIDOS project, whose smart contract impacted the whole blockchain. Basically, it was an airdrop that got too popular: people sent a small amount of EOS to the eidosonecoin account and received the same amount of tokens back and an additional 0.01% of all the EIDOS tokens.

To do so, people needed to rent resources from REX. The borrowing rate skyrocketed, and the CPU became a scarce resource once millions of transactions were going through. REX returns went from 10% to 83% in a few days but at one point it got saturated, and as a result the network actively declined and a state close to system paralysis occurred. Some people believed that EIDOS was a spam attack on the network.

“EIDOS is good for EOS long term. The perception that it hurts EOS is only short term.Everyone competes for finite resources of the EOS network. It’s totally fair and market driven. We are all looking for equilibrium. And it’s an endless chase. Nothing’s 100% free.”

So in the long term, despite the current inconveniences, the airdrop tested the system and, while slowing it down for a little bit, it also has shown its true potential. The developers don’t seem to be too worried about this airdrop too, and some people even applauded their original marketing strategy.

Dan Larimer, answering the question if he is aware of what’s happening on the network right now:

“Yeah, the network is processing far more transfers per second than any other public network and sustaining it... all before eosio 2.”

And that’s the point. All the problems occured due to the artificial limit set on the number of transactions and the fact that eosio 1.8 is still in use. And with speeds increased up to 16x on EOSIO 2.0, this problem won’t be happening at all.

CHINA (A Big Opportunity for EOS)

China has been in the spotlight for the past couple of months due to a lot of reasons, and one of those is China’s President Xi Jinping’s public statement, released to the whole country:

“We must take blockchain as an important breakthrough for independent innovation of core technologies, clarify the main directions, increase investment, focus on a number of key technologies, and accelerate the development of blockchain and industrial innovation.”

At the same time, China’s Ministry of Industry released its rankings of cryptocurrency projects, and EOS was at the top of the list, followed by TRON and Ethereum.

Considering the popularity of EOS in Asia and especially in China, this opens a great opportunity for EOS to expand its influence in one of the biggest markets in the world. It has to be noted that Xi doesn’t mention existing cryptocurrencies or separate projects, but an overall positive focus can still open the doors for investment and the atmosphere for all crypto projects will become less uncertain.

Speaking of EOS, with a foothold in China and the upcoming Voice, it has a great starting position. And with recent developments, all the difficulties they’ve overcome and their ambitious plans - for the first time in a while, we can confidently say that the future of EOS looks very promising.

Thanks for reading and come back for the next Lumi Wallet Digest on EOS!