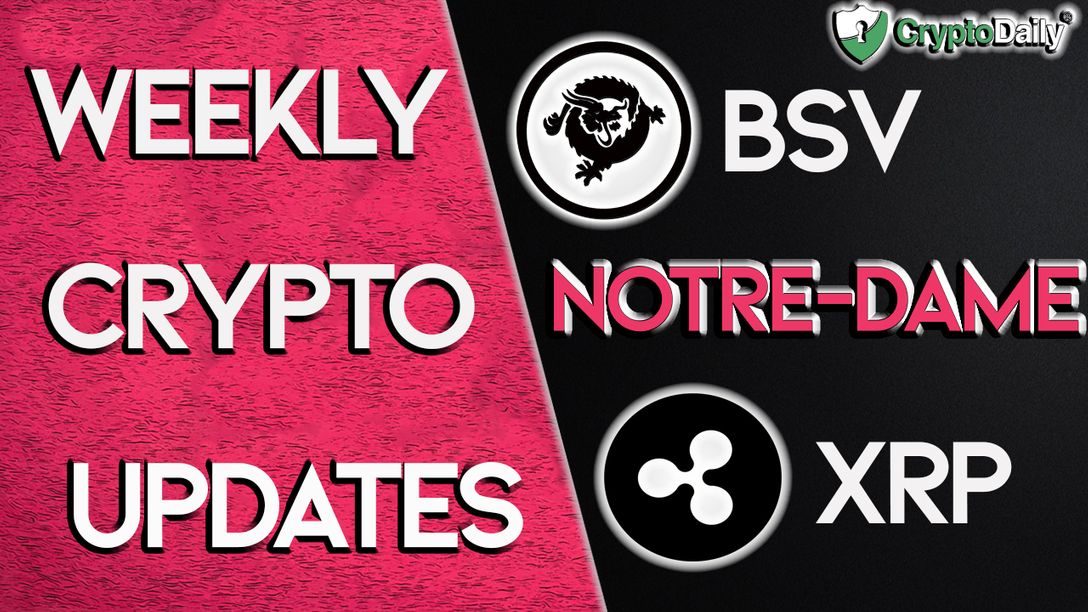 This week has been a particularly interesting one for the crypto space. Well, not just for the crypto space though as the recent fire that broke out in Paris has been felt by everyone around the world, something of which you can now help re-build with Bitcoin. Also, this week we saw xRapid make even more waves on a global scale and the controversy that came from Bitcoin SV has made some stirs on Twitter.

You may have heard of the Kraken Exchange who recently announced that its final decision to delist Bitcoin SV from its platform. This comes as a movement against some unlawful actions that were promoted by the main sponsors and investors of the project, Craig Wright and Calvin Ayre.

On Kraken’s official blog, the exchange explains that the team at Bitcoin SV has manifested a series of unethical behaviours that threaten the general beliefs of the community. Wright and Ayre have been accused of misleading, threats, bullying and as if that wasn’t enough, fraud. Apparently, this has been going on for months too.

“Over the last few months, the team behind Bitcoin SV have engaged in behaviour completely antithetical to everything we at Kraken and the wider crypto community stands for. It started with fraudulent claims, escalating to threats and legal action, with the BSV team suing a number of people speaking out against them. The threats made last week to individual members of the community were the last straw.”

The Kraken exchange isn’t the only one thinking about this though and other important platforms have also got rid of any association with the token. The most important so far though are BitForex, LiteBit, Shapeshift, blockchain.com and Binance.

In asking the community as to whether they should delist Bitcoin SV, Kraken put out a poll on Twitter which got an astounding response from their followers. 70,545 people voted in the poll with 71 percent of them saying that it is toxic and should be delisted.

Ripple is a company that just keeps on growing. According to the SVP of product at the firm Asheesh Birla, Ripple has been working on keeping that growth going with their XRP-powered cross-border payment product xRapid.

In a recent AMA session, Birla spoke on several topics including the firm’s strategies and plans for its native currency XRP and, of course, xRapid.

“On-demand liquidity is available today in Mexico and the Philippines. So far, the positive responses from our customers in those two countries has been overwhelming. But we are working on the next set of destinations, which we will be announcing in hopefully short order here.

I know our product teams, and marketing and engineering teams are working hard to light up those next set of destinations so that we can provide our customers with increased choice in terms of global expansion.”

You will most likely have heard of the tragedy that happened in Paris earlier this week. But a few days ago, the Notre-Dame Cathedral caught fire and left, not just France but, the world mourning such an iconic monument which was built more than 800 years ago.

After the fire, people of the world came together to start raising money to help fix the damages, some which were priceless such as the Cathedral’s spire.

Gregory Raymond is a French journalist, specialising in blockchain and has launched a Bitcoin fund to raise money for the reconstruction of the monument.

President @EmmanuelMacron has announced a subscription to rebuild #NotreDame. Hey bitcoiners, let's prove to the french authorities #Bitcoin can be an amazing way to send funds quickly, without border and for a good cause ! #bitcoinfornotredame 1JX3k1e1acXENqoKqaAtKKEdE9C2j4WsDB pic.twitter.com/Xu1zULMqL1

If you want to help out with this honourable cause to help rebuild such an iconic landmark, here is the Bitcoin address to help fund the repairs: