New Ambitious Trading Pair On Bit-Z Exchange: Will ADM/USDT Show Us The Good Results In 2019?

A some of Crypto Daily readers might know, ADM is a utility token supporting decentralized infrastructure of ADAMANT Messenger. Due to ADM token existence, ADAMANT has the possibility and is independent from governments, corporations and even developers.

It provides the messenger’s ecosystem with fully financial independence, while the system is being runned just like blockchain of Bitcoin—autonomously self-supporting.

ADM has the value of a utility-token and is designed to pay for internal functions inside the ADAMANT Messenger. For example, it can be a small commission for sending messages, since all messages inside the messenger network are strongly encrypted and stored in a decentralized way in the blockchain — to maintain the operation of such a network the ADAMANT token was developed. This is the only financial tool related to the blockchain messenger called ADAMANT.

As a result of the recent cooperation between ADAMANT and the Bit-Z exchang​e, you can​     buy and sell ADM tokens as well as transfer ADM and BZ in ADAMANT Messenger chats.

Bit-Z ​is one of the leading digital asset trading platforms. At the time of this writing, Bit-Z ranks 2nd in the daily trading volume.

Those who want to buy ADM anonymously, as the idea of this very encrypted blockchain messaging says, can still do this in the relevant webpag​e on the official project website.​

Explaining the project shortly, ADAMAN​T is a blockchain platform for secure messaging.​ ADAMANT Messenger uses the Fair dPoS consensus algorithm in its network, what is an unique modification of classic delegated Proof of Stake setting.

The apps do not require a phone number or email for sign-up and allows you to send cryptocurrencies right in chats. ADAMANT is available on iOS and Android, as well as via browser.

For example, along with BZ token integration, web-applicatio​n ​also offers you to store and transfer Binance’s BNB coins, as much as ETH and ADM by default. 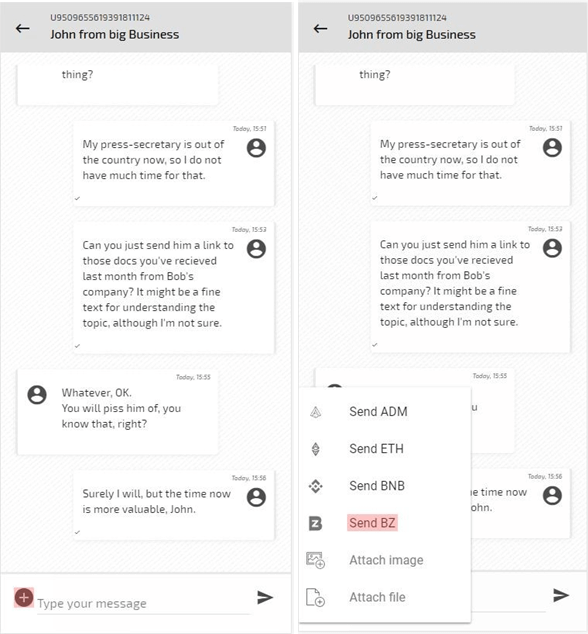 As it was said before, among with the new level of crypto transfers, each message is encrypted by true end-to-end (open source) and transferred, delivered, stored in a special, separate blockchain of ADAMANT. Cost per 1000 messages is about 1 ADM.

Moreover, the transactions rate (for messages and normal currency transfers) is about 4 seconds. Incidentally, we may say that ADM sets a speed record among other decentralized cryptocurrencies like Lumens or Ripple.

Furthermore, you can make a profit from ADM forgin​g.​ The ADAMANT team has recently presented this system and there is a series of articles on the matter, since the forging (mining on dPoS) is a very important part for supporting the delegated Proof of Stake network.

In conclusion, we should say that ADM tokens have a bright future ahead. Indeed, if the developers hold their frame, we will be able to enjoy the tokens’ beneficial and functional nature.

Just recently trading pair on Bit-Z was opened and has the following link: ADM/USD​T.​

PREVIOUS Bitcoin (BTC) Finally Catches Up With Gold After Following It For Years
NEXT Are ETF’s Good For Bitcoin? Or do they Go Against Satoshi’s Creation?